In the modern world, many gardeners use fertilizers such as green siderates. Peas belong to the legume family, therefore it contains a lot of protein, this culture perfectly enriches the soil with useful substances, which means that after it both fruit and vegetables will grow, of course, better, which means that peas, as a siderat, are quite suitable. It is used not only as a green manure, but also as food for pets. For example, in cattle, from eating peas, milk becomes more nutritious and fatty, rabbits also eat this plant, and chickens give more eggs from it. Therefore, this plant is equally liked by both livestock breeders and gardeners. Today we will tell you about the effect of peas on the soil, as well as how to properly plant peas on green manure and how relevant peas are as green manure. Perhaps the information provided will be new to you, but even if you are an experienced gardener, you will definitely learn something interesting and useful for yourself.

Peas as green manure: impact on the soil 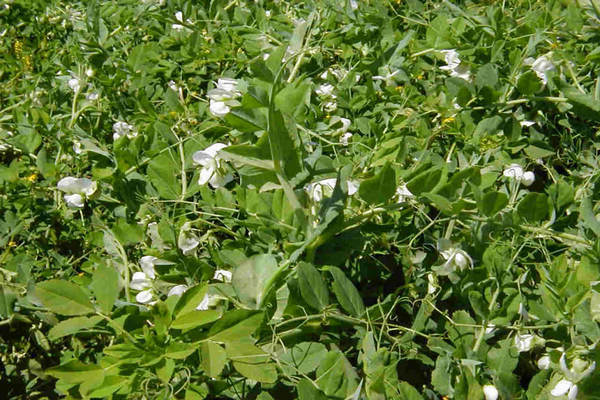 As you know, crops belonging to the legume family perfectly transport nitrogen, so many vegetables grow remarkably well after peas on the site. For example, nightshades, cucumbers, zucchini, carrots, nitrogen fertilizers are needed in large quantities, and it is rather expensive to add them to the soil every season.

If you use only mineral fertilizing, then the fertility of the soil may even decrease. The amount of humus in the soil begins to decrease, so the taste of vegetables also deteriorates. An interesting fact, in many US stores vegetables grown with the use of mineral fertilizers even lie on separate shelves, since they taste a little worse than their "natural" counterparts. But vegetables, "fed" on organic matter, is another matter. By the way, siderates are the same organic matter (if you haven't guessed yet). Mineral vegetables are considered second-rate, they are not so pleasant and juicy to taste. Therefore, in order for only tasty and aromatic products to grow in your garden, you should pay attention to manure and green manure. In addition, these natural fertilizers are much cheaper, and if you are also a livestock breeder, sometimes they are completely free.

Siderata, as they grow and develop, loosen the land, make it well structured. They also enrich the soil with nutrients, since plant residues are naturally rotted. During fruiting, many vegetables select many useful trace elements from the soil, so if you constantly grow the same set of vegetables in your garden plot, then the fertility of the soil will decrease. But in order to quickly restore the natural fertility of the land, you can use green manure, this is considered the cheapest and fastest way to regenerate the soil.

With the help of siderates, you can also get rid of weeds. Usually, they have a well-branched root system, so weeds practically do not appear on the surface of the earth, because siderates simply do not give them any chance, light usually does not reach the soil. This means that weeds will no longer take life-giving moisture and nutrition from the soil. Sometimes, in a couple of years, even wheatgrass or sow thistle can be removed on the site, moreover, you will not take a hoe in your hands. Siderat will do everything for you.Agree, even an empty piece of land needs to be weeded intensively so that the weeds do not throw out the unfortunate seeds, and if, for example, you plant free space in the garden with peas, then there will be no need to weed the beds.

Many of the green manures, including legumes, also emit phytoncides, which destroy many pests and also stabilize the microflora. As you remember, nodule bacteria live on the roots of peas, which convert nitrogen into a form accessible to plants. So after legumes, all vegetables will grow more intensively. If you add manure to the soil, then you will most likely have to buy it, and this is not a cheap pleasure. In addition, such organic matter very often contains weed seeds, because they are not always digested in the stomach of pets, therefore, in addition to fertilization, you will transfer a new portion of wheatgrass or sow thistle to your site.

Spreading manure over the site is also not very easy, it is quite difficult. Whether it is green manure seeds, sometimes one glass is enough for a huge area of ​​land, and they cost quite a bit. All you need to do is scatter pea seeds around the area and wait for shoots. In addition, many legumes reduce soil acidity, which also affects the growth and development of other plants. The roots of peas penetrate rather shallowly into the soil, so nutrients will always run close to the surface of the earth, which means that even the weakest vegetables will definitely receive the necessary microelements after legumes. Many people prepare compost from leguminous green manures, as well as a nutrient solution for irrigation of various crops.

Peas as green manure: when to sow? 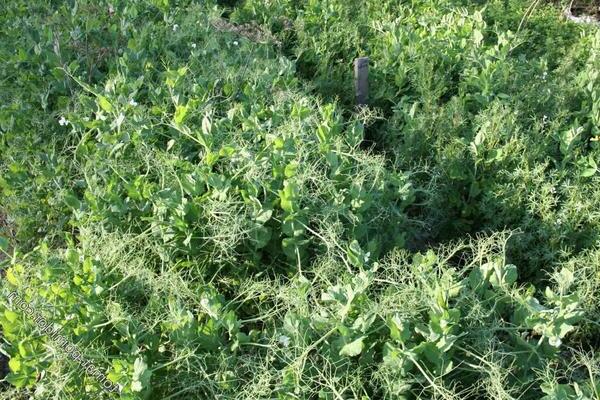 Photo of the green manure field: mustard with peas

It is very important to plant the peas as a green manure at the right time in order to get the most out of the green manure. It is believed that most of the useful microelements and substances in the green mass of this crop accumulate during the period of pods filling, therefore it is necessary to cut the peas and dig up at this time. If you do this a little later, the shoots may not completely rot in the soil, as they will become much rougher over time. In southern latitudes, shoots grow up to 30 centimeters mark, but remember that peas can be embedded in the ground only when the soil warms up well. In order for legumes to decompose faster, they are often watered with special preparations that contain bacteria that process plant residues. Over time, they turn them into humus, which is so necessary for vegetable crops.

In central Russia, legumes used as green manure should be planted in late spring. At the same time, peas should be embedded in the soil in time, so that the green mass turns into nitrogen, potassium and phosphorus. Sometimes siderates are planted after harvest, in early autumn or late summer.

Before planting peas, you should burn off any remaining vegetable tops. It will also further enrich the land with phosphorus and potassium. Peas intensively accumulate nitrogen in the soil, so legumes do not need such fertilizers at all. But phosphorus is involved in the formation of the root system, so it will also need to be embedded in the soil. Sometimes gardeners recommend adding superphosphates to the soil before sowing the area with peas. This is done in order to accelerate the growth and development of plants, because in this way the legumes will have time to build up as much green mass as possible before the onset of frost. Peas are often not cut at all in the fall. It is left on the ground so that it has time to decompose a little over the winter, and in the spring the remains of the plants will need to be dug up.

Cutting peas is easy and simple, the green mass of plants also perfectly retains moisture and snow, this tops are often used as mulch.Useful substances penetrate into the deep layers of the earth, the soil becomes loose and well-structured, therefore, after adding this green manure to the soil, vegetable crops will grow better. Sometimes these very greens are added to the compost, but the root residues are left in the soil. It is believed that the roots of peas contain a lot of nutrients and trace elements, so the root system is also considered an excellent fertilizer.

Sometimes peas like green manure in the fall are not mowed at all, but immediately dug up the plot. Until spring, plants usually have time to decompose, so lazy summer residents are very fond of using legumes as siderates. Most of the nodule bacteria form nitrogen during the period of budding and fruit formation, so it is better not to touch the peas until this moment. Plants do not yet have time to give up the maximum of nutrients and microelements.

Peas as green manure: how to plant? 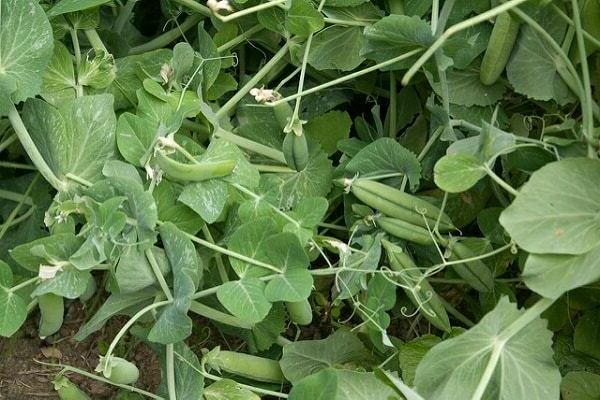 Peas as green manure are usually planted in rows in the fall, leaving 15 cm between rows. This must be done so that air circulates through the site, which means that the crops do not hurt. For one hundred square meters of land, you will need about 2 kg of seeds, if you want to plant peas thicker, you can leave 7 cm between rows, but you will need one and a half times more seeds. If we talk about the sowing depth, then on light soils, peas should be embedded in the ground by 7 cm, and on heavy soils - by 3.

Sometimes green manure legumes are planted together with cereals such as wheat. However, the wireworm often feeds on the roots of these crops, so if these pests have settled on your garden plot, then planting peas is best, for example, with mustard. Sometimes this plant is planted next to lupine or phacelia. You can alternate the rows. But keep in mind that legumes are not very resistant to diseases and pests, so you can often see signs of powdery mildew, rust or fusarium on the leaves. Therefore, be vigilant, it is better, of course, to alternate green manures so that diseases do not affect the whole area. Peas are susceptible to the influence of fungal infections, so you check the plantings in time and carry out preventive treatments.

Sometimes peas as green manure are used to prepare dressings for indoor flowers. To do this, a little water is poured into plastic bags, the torn pieces of green peas are put there, the air is removed and the resulting substrate is placed in the sun. If you notice that the peas have turned black, and the volume of water has decreased by 3 times, then this means that the fertilizer is ready. And it can already be poured into pots. You can also water other vegetable crops with such green tea. Very often, pea tops are simply poured with water and kept for a couple of weeks, such feeding also enriches the soil with useful substances and microelements, however, this solution has a specific smell, so it is better not to brew such tea in a living room.

Siderata have recently become more and more popular. Legumes are used for the preparation of both liquid and dry dressings. The yield after such predecessors increases by 50%, with all this, you do not have to use expensive organic matter.

It is easy and simple to use green manure without heavy manual labor. All you need to do is buy a couple of glasses of pea seeds and plant them in the area, and at the right time, mow the plantings and dig up the soil. Try this unusual method of fertilizing the soil, and we promise you, you will definitely like it, vegetables after legumes grow very intensively, and bear fruit surprisingly well.

Tree lily: secrets of planting and care, the best varieties with photos

Cherry Anadolskaya: TOP reviews, description of the variety with photo 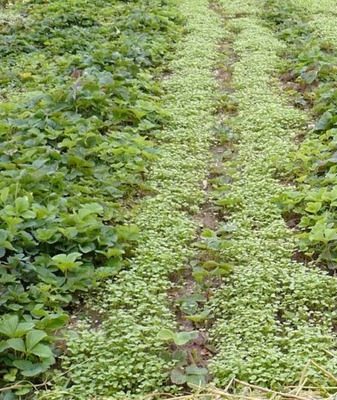 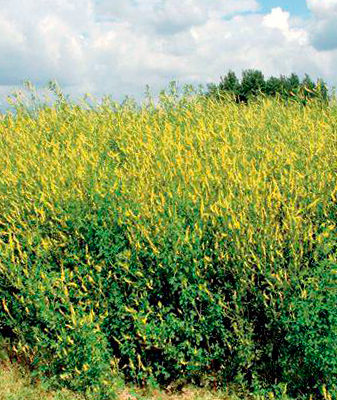 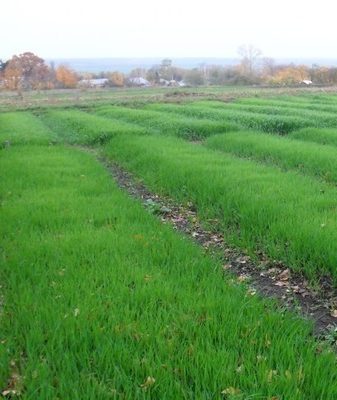