Hatiora belongs to the wild nature of Brazil. This family includes from five to ten plant species, it should be noted that not all can take root in home conditions. Many experts claim that the flower belongs to the Rhipsalis family. Initially, this family was called - "Khariota", the name was given in honor of the English scientist and traveler - Thomas Harriot, he is considered among the first natural scientists in America. But over time, scientists learned that this name was given to another flower, so the experts simply changed the letters in the name, called it Hatiora. 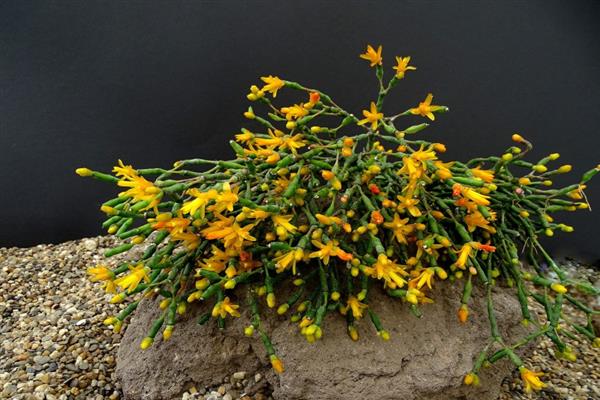 The plant looks like a bush, its branches are jointed. The segments are similar to cylinders, they are in the form of pins or are simply flat.

What is the difference between ripsalis and hithiora? Hatiora can be found on pebbles, in rocks, and ripsalis grows on trees. The flowers also differ in the direction of the branches, in the hatior they grow up, and the ripsalis is lowered down. Hatiora is varied in color, it can be yellowish, scarlet or pinkish. Ripsalis becomes creamy. In general, these plants are native to each other, and they can be grown in the same condition.

At home, practically no care is needed for the plant. The most important thing to grow is a place where the plant will have enough light. It is better to put it on the window in the southern part of the house, but do not forget about ultraviolet radiation, it is dangerous for the leaves of the plant.

For the comfortable development of a flower, it needs a temperature interruption between day and night. The most comfortable temperature in the summer period is from eighteen to twenty-five degrees. when it's warm outside, the plant can be rearranged on the veranda, in the greenhouse under a small shade. 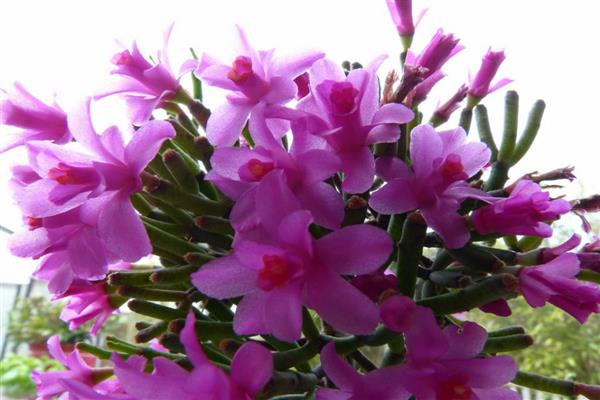 In winter, the plant prepares the buds for the spring inflorescence (April or May), so the plant does not need heat, it is necessary to regulate it from twelve to fourteen degrees.

The plant does not like stuffiness, so it is necessary to regularly ventilate the room. In the heat, you need to spray the plant, if there is a drought on the street, then watering from the dispenser must be repeated. With low humidity in the room, the plant may shrivel.

Any grower monitors the appearance of his plant, so every spring it is necessary to cut off excess branches. You also need to very carefully cut off all the segments from the shoots.

Moisten the soil as soon as the first layer of soil in the container with the plant dries. Povil is carried out with clean water at room temperature. During rest, it is often not necessary to moisturize, once every twenty days is enough. After watering, you need to remove the water from the pallet. It is important that there is no stagnation, the temperature of the water is also important, it must be at room temperature, otherwise the roots of the plant may simply rot.

It is necessary to feed the plant with useful substances during the growing season, and when the plant is blooming. Fertilizers can be minerals without calcium, with a small amount of nitrogen. You need to feed the plant once every fourteen days. During rest, food is not needed.

A young plant needs a transplant every year, more mature plants need one transplant in two years, but an old plant can be transplanted every five years. The time of the procedure is spring, at the end of the inflorescence.

We need land mixed with sand, peat, leaves and turf. You can also mix ash. The ground must be neutral. You will need a small transplant container, the first layer of which will be a drainage system. Next, fill in some prepared earth, then transplant the plant. Then cover everything with soil, moisten. 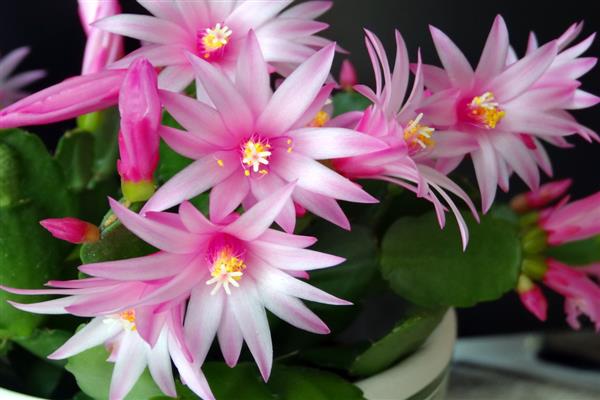 The plant simply propagates by cuttings. A fallen segment can become the embryo of a new flower; it will release roots even in a container with a parent shrub. To carry out such a procedure, it is necessary to remove a couple of segments from the plant. The stalk is processed to heal the wounds, leaving it for three or five days. Next, the twig from the bottom is treated with a root growth agent, then the stalk is planted in the ground, watered. It is worth moistening when the earth is completely dry, you can also use bottom irrigation through the pan. If you follow the care of a small plant, then in a year it will grow and begin to bloom.

Breeding time is summer. It is necessary to cut off part of the rootstock, push the stem apart. It is necessary to take a couple of segments from the cutting of the plant. The plant at the bottom should be sharp, then the rootstock is placed in the split of the stem, the grafting sites are marked with a plaster. You can remove the patch only after the sprouts are there. At a temperature of eighteen to twenty degrees, the plant can be cultivated in two or three weeks. Leaves growing next to the graft must be cut off. This shrub blooms regularly with such reproduction. 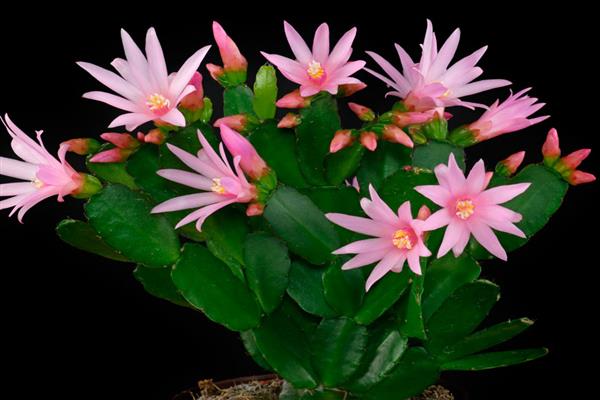 The plant is absorbed by insects such as: scale insects, mealybugs, spider mites. All of these rodents feed on the plant, sucking out all the vegetation from it. To combat such insects, the plant should be treated with special agents that can be purchased at a gardening store, for example, the following: Akarina drug, Fitoverma. But the topsoil should also be replaced with a new one.

With constant stagnation of moisture in the green, the plant may begin to rot. The trunk of the bush can change color to borax and weaken. Thus, as soon as you see the rot, the plant can be thrown away immediately, because it will be impossible to protect it and the disease. But you can cut healthy cuttings and grow a new flower from them.

The plant can get sick with late blight. The plant fades in all its senses.To combat the disease, the flower is sprayed from the Oxychom dispenser, and the plant must also be treated for prophylaxis.

It happens that a flower cannot bloom. This can be with a small growing container, improper care during dormancy, it can also be the buds of the inflorescence. Attention! In winter, the flower should stand in a room with a temperature of ten to sixteen degrees, do not feed the plant, there should also be little moisture.

UNDER WHAT CIRCUMSTANCES DOES THE LEAVES BECOME YELLOW?

The plant can get sick from pests on it or from a lot of moisture. Leave the plant to die further, immediately look for the cause, treat the plant, then you can save it, and if you do not pay attention to this, the plant will die. 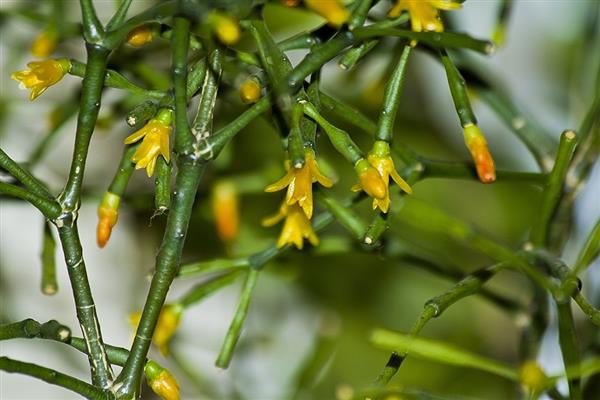 A large number of hatiory species are grown at home, several species are further presented.

In another way, it is also called - salicornia. The plant looks like a small tree, the size of which is up to forty centimeters. The difference between other plants is the thin twigs that intersect. Since April, inflorescences of scarlet, yellow, pinkish color can be observed. They look like bells.

The twigs of this plant are flat, green with a shade of brown, the leaves are in the form of pins, the buds are pinkish in size from thirty to forty millimeters.

Such a flower has wavy stems, up to thirty centimeters in size. The color of the stem is poisonous green, sections are from twenty to fifty millimeters, the inflorescences of fuchsia are about five millimeters.

These are two plants in one of Garner and pink hatiora. Wine-colored inflorescences. But over time, the flowers can change color.

We can say that this is a medium bush. The stems are pentahedral, the inflorescences are cream-colored, small.

Because of its type, people call the plant differently, for example, men's tears, drunkard's dream, dancing bones and other names. There are gardeners who do not grow such a plant at home; people say that it scares a man out of the house. Who believes in it, who thinks that it is nonsense. But scientists consider this to be nonsense.

Plum varieties: TOP of the most viable with a description, photo and video

Vaccination of a cucumber on a pumpkin: TOP rules for grafting cucumbers with video