How to water pepper in a greenhouse: frequency, methods
622

How to water pepper in a greenhouse: frequency, methods

The article talks about how to water peppers in a greenhouse: frequency, correct watering methods, general information on feeding.

How to water peppers in a greenhouse, optimal growing conditions 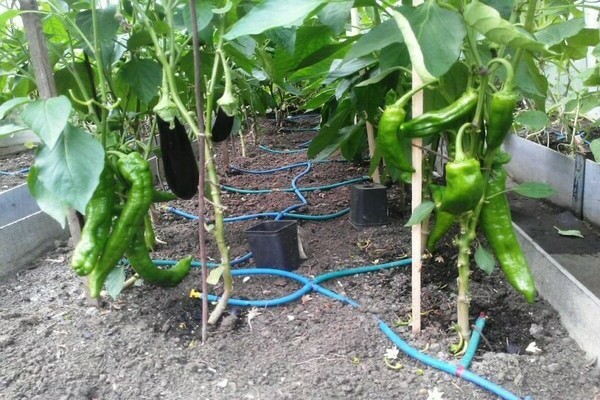 How to water peppers in a greenhouse, optimal growing conditions

Proper watering of plants is, of course, one of the prerequisites for obtaining high yields. However, to begin with, let us recall a number of features of growing this vegetable crop, which, together with proper watering, will allow you to achieve the desired results.

We all remember that pepper is a heat-loving plant, therefore, in the open field, it will delight only residents of the southern regions with a harvest. For gardeners in most regions, the cultivation of pepper is available only in closed ground, respectively, the plant needs to provide shelter from possible "surprises" of the weather.

In addition, in addition to creating greenhouse conditions, it is important to adhere to the recommendations for planting pepper. So, experts advise not to thicken the planting, and plant the plants at a distance of at least 30 cm from each other. Many people forget that soon, a very small plant will turn into a rather powerful branchy bush. With frequent plantings, the bushes will interfere with proper growth, shading each other. In turn, pepper is a fairly light-loving crop. The duration of daylight hours, allowing to obtain a high yield, cannot be less than 12 hours.

Also, so that your work is not wasted and the bushes do not break under the weight of the future harvest, even at the stage of planting seedlings, you need to take care of the support for the plants.

In addition to the air temperature, the soil temperature is also important for the plant. Optimal for planting seedlings is the temperature of the soil warmed up to +15 degrees, and for the formation and development of fruits + 18 ... + 20 degrees. As a rule, to the desired value, the soil in the greenhouse warms up no earlier than one and a half, two months after sowing seeds for seedlings.

The pepper will grow and develop correctly, provided that the soil is well breathable, therefore, you should regularly loosen the soil, preventing the formation of a crust on it and ensuring the flow of air to the roots of the plant. It should be noted that the roots of a plant, like its other organs, need oxygen. By absorbing oxygen, the cells of the root system emit carbon dioxide. On heavy soils, root respiration is usually impaired because water displaces air. When growing plants on such soil, loosening cannot be neglected. In addition, loosening helps to retain moisture. So, when a soil crust forms, water begins to evaporate faster. By loosening, we destroy the crust and moisture is better retained in the surface layers. On this account, gardeners have an expression: "It is better to loosen well once, than to water badly 2 times."

These recommendations are quite general, typical for most vegetable crops. Therefore, when growing any particular variety of pepper, you must follow the directions on the seed package.

How to water pepper in a greenhouse correctly 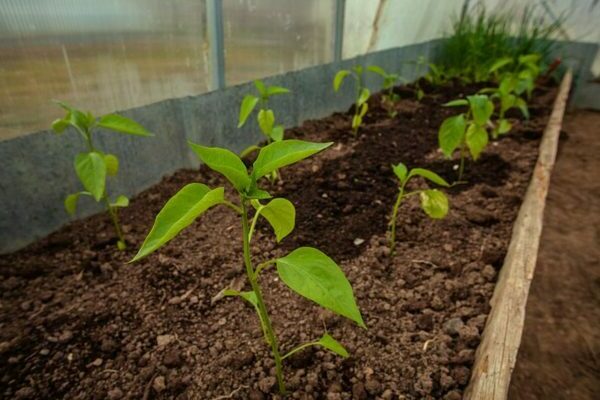 How to water pepper in a greenhouse correctly

Maintaining optimal humidity in the greenhouse is also one of the conditions without which it will not be possible to grow a crop. In this case, the level of humidity of the air and soil is also important. The value of these indicators should be 70% and 60%, respectively.And at the stage of fruit ripening, the air humidity of 80% will be optimal.

How to properly water the pepper in order to ensure normal growth and development of the plant.
It is very important to choose the right time for watering the plant, since the root system must absorb the amount of moisture the pepper needs. Indeed, for example, when watering in heat and heat, moisture evaporates faster, and a crust forms on the soil, making subsequent watering practically useless. Therefore, it is recommended to water the plants in the morning, when solar activity is not so high. If hot weather is established for a long time, then watering is carried out in the evening, closer to sunset.

If possible, it is better to exclude watering with cold water. Experts advise using water heated to 15-18 degrees for watering pepper. In a greenhouse, as a rule, the water warms up faster and keeps the temperature even at night. Therefore, if the container for irrigation is installed in the greenhouse, then in the morning, you can already water it with the water collected the day before.

In addition, it is important to regularly ventilate the greenhouse, since the greenhouse effect, characterized by high humidity, contributes to the emergence and development of various diseases that can lead to the death of the plant. Airing will also eliminate air stagnation, ensure constant air exchange and, of course, will contribute to pollination of plants, without which harvest is impossible.

The amount of watering depends on the stage of development of the bush. During the growth period, watering should not be carried out more than once every two days. And when the bush begins to bloom and bear fruit, the amount of watering is reduced. By the way, during the flowering period, experts advise to exclude watering of sprinkling methods and apply liquid exclusively under the root of the bush. If you notice lethargy, dryness of foliage or its yellowing - the plant "speaks" of a lack of moisture. Such a frequency of watering, as practice shows, is suitable for peppers of such popular varieties as: "Orange Miracle", "Health", "Elephant", "Othello". However, in any case, it will not be superfluous to familiarize yourself with the irrigation scheme recommended when growing a particular variety, since some of them may be more or less demanding on the irrigation regime. These include, for example, peppers of the following varieties:Ratunda«, «California miracle«, «Bogatyr«, «Habanero«.

The amount of watering often depends on the quality of the soil. Plants grown on poor soil or sandy soil require more moisture, about a liter per bush. If the land is loose, then much less water will be required. It is necessary to distribute water around the bush carefully, in order to avoid the appearance of a crust on the soil. To prevent this phenomenon, some gardeners practice one-sided watering, that is, the liquid is applied only on one side of the bush, and on the other, the soil is loosened. The next time these sides change.

It should be noted that abundant watering is especially required for pepper seedlings, immediately after planting. The next watering is carried out no earlier than 5 days later. And a couple of weeks before harvesting, watering of pepper is reduced to a minimum, or even stopped altogether, for faster ripening of the fruits.

How often to water the peppers in the greenhouse, what watering methods are there 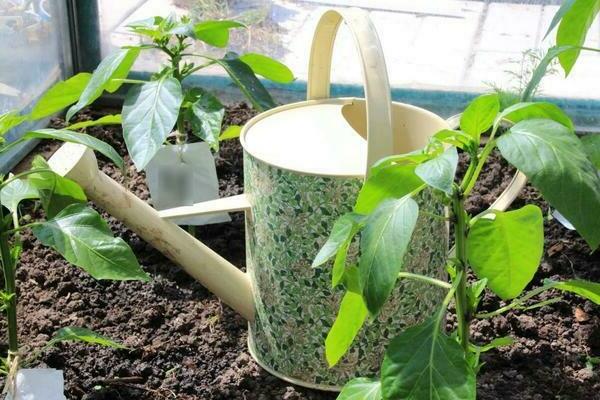 How often to water the peppers in the greenhouse, what watering methods are there

When growing small amounts of peppers in an appropriately sized greenhouse, most growers make do with hand watering. This option, of course, does not require large financial investments. However, you have to make an effort and work hard.

Large volumes of planting require a completely different approach to the organization of irrigation.

Mechanical irrigation, for example, is a cross between manual and automatic irrigation. This irrigation involves ensuring uninterrupted water supply to the irrigation system and adjusting the volume and force of the jet.Physical labor in this case is minimized, but at the stage of installation and installation of a system consisting of many pipes and hoses, it will still have to be done. Mechanical irrigation assumes a permanently operating fluid supply system, the source of which can be a well, a centralized pipeline or a well, equipped with pumps or water pumping devices. Since the operation of this equipment requires electricity, in case of a temporary shutdown, it is necessary to take care of the availability of water supplies by installing appropriate containers, tanks that will be constantly filled with water. Among the disadvantages of such an irrigation system, as a rule, a large number and cumbersomeness of equipment and various devices that ensure its operation are noted.

Automatic or drip irrigation, today, is the most modern method, which, moreover, involves the use of better equipment. However, this watering option is not permissible for all varieties of pepper. In addition, the quality of the soil must be taken into account when installing the system. So, on loose soils, the holes for the exit of liquid are made more frequent, approximately every 20 cm.On medium compacted soils, this distance is 30 cm, and on heavier soils - 35 cm. After all, as we remember, heavy soils are significantly moistened stronger, and excess moisture can adversely affect the plant. Water consumption is also regulated accordingly so that the plants have time to absorb moisture and puddles do not form on the soil.

A little about feeding pepper

Despite the observance of all the previously listed conditions for growing pepper, there is no good harvest without feeding the plants.
It is especially important to ensure the application of fertilizers when planting young plants in the ground. Top dressing, in this case, will facilitate easier and faster adaptation of plants to new conditions. The faster the plant takes root, the more actively it will start growing and begin to bear fruit in time. For such feeding, chicken manure (1:12) or mullein (1:10) dissolved in water is used. The consumption of such fertilizer is 5 liters per 1 sq. M. Also, quite often, peppers are fed with wood ash, in the amount of 150 grams per square meter. We should not forget about the introduction of complex mineral fertilizers. Such formulations must be thoroughly dissolved in water. Otherwise, the fertilizer will simply settle to the bottom of the container and its effectiveness will be reduced to a minimum.

Herbal infusions of nettle and celandine are used as a prophylaxis for various diseases.
After such care, pepper will certainly delight you with a harvest of vitamin fruits. It should be noted that ongoing research is constantly revealing new beneficial properties of this vegetable, which was brought to Russia, by the way, as early as the 16th century. For example, consistent consumption of fresh peppers can help reduce the likelihood of cancer in smokers. Thus, sweet peppers compensate for the deficiency of vitamin A, which is formed as a result of exposure to the body of carcinogens contained in cigarette smoke.

How to water peppers in a greenhouse

Pets: should you bring them to your garden?