When to plant lilies

All gardeners know that tulips, daffodils and lilies are propagated by bulbs. "Babies" are formed on the mother's bulb, which must be separated in a timely manner and transplanted to a new place. If this is not done, then the flowers become too crowded, the supply of nutrients in the soil is rapidly decreasing, the plant forms fewer and fewer buds, their inflorescences become smaller and may deform. A large number of "children" do not allow each other to fully develop, there is not enough space for the formation of new bulbs. The planting thickens, which means that a favorable environment is created for the development of all kinds of infections and the spread of harmful insects. To avoid all these troubles, lilies are planted from time to time. And the health of the bulbous plants and the further flowering of your garden depend on how timely and correctly you do it. Therefore, later in the article we will talk about when to plant lilies. 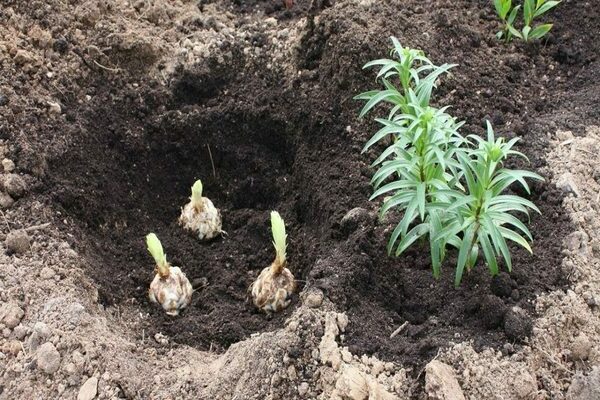 Most lilies grow in one place up to three to four years and this does not affect their health. Some centenarians are able to grow in one place for up to ten years. But sooner or later, any varieties of lilies will have to be transplanted, and the main thing is to choose the right time for this. Lily varieties can be conditionally divided into two types: fast-growing and those that grow slowly. The first group includes all Asian lilies, tubular species, as well as the Candidum lily, it is recommended to plant them every three years. Varieties with slower bulb growth include Martagon and American lilies, these varieties can be planted without worrying for the next ten years.

When to plant lilies? In autumn or spring

In the question of when to plant lilies, flower growers cannot come to a consensus on what time of the year it is better to transplant: in spring, autumn or in the summer months. Therefore, let's talk a little more about the advantages of each season, so that you can draw conclusions based on the information received and choose the most convenient option for yourself. Spring. If, for some reason, it is necessary to transplant lilies in the spring, then it is very important to choose the right time, based on the weather conditions in your region. In the south, this can be done in the second half of April, in the Central Lane - in the first half of May, and in Siberia and the Urals - in the second half of May. If you did not have time and the bulb has already released the stem, then it is better to refrain from transplanting for now, as there is a risk of ruining the plant. Summer. There are varieties that bloom quite early and the bulb goes into a dormant state by August. For example, "Candidum" and "Snow White Lily" can be transplanted in the summer without fear of injuring them. And also most Asian hybrids can be transplanted at any time of the year, these are the least capricious varieties of lilies that adapt well to a new place. Autumn.

Lilies bloom by mid to late summer, after which the bulbs accumulate nutrients and prepare to go into a dormant state. It is this time, after the end of the growing season, is the most comfortable for plants, now they are most ready for division and transplantation. By the next spring, the bulbs will take root and adapt to their new location, and you will have a lush and beautiful bloom. There will be a place for the formation of new children, which means that in the first year after transplantation, much more of them will be formed than usual. Considering all these factors, most flower growers prefer to plant lilies in the autumn.

It is important to remember that the signal for the end of the growing season is the complete wilting of the stem (which in no case should be cut off after flowering), only then can the bulbs be dug out. And the separated bulbs must be planted in such a way that they take root before the onset of frost. In the middle lane, planting work must be carried out no later than the beginning of October, in the southern regions this can be done throughout October and in early November, in Siberia and the Urals, it must be completed before the end of September.

Depending on the variety, lilies may also require different planting times, someone takes root faster, other species need a little more time. Royal lilies, white varieties and Candidum should be planted early in September. Tubular varieties can be transplanted in October, and Asiatic lilies, as we said earlier, at any time.

How and when to plant lilies? Algorithm of actions 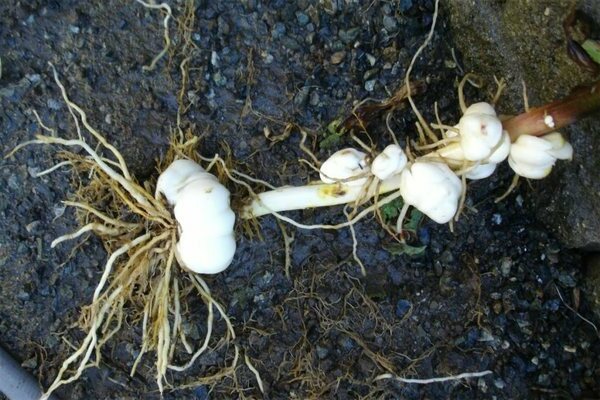 When planting lilies, you need to act consistently and perform a series of actions: prepare a new place, prepare the bulbs themselves for planting and, in fact, plant them at the correct depth. Let's start by preparing a new location. Lilies love the sun, in the shade the flowers become smaller and lose their brightness. Also, the place should be protected from the wind. If the entire space of the site is occupied, and you plan to plant lilies in the same flower bed from which they were previously dug out, then you will need to update the topsoil to reduce the threat of infection of the bulbs with various infections. Any bulbous plants do not tolerate when the liquid stagnates, this increases the risk of developing fungal diseases and rotting of the bulbs. Therefore, it is very important to provide a good drainage layer using branches, expanded clay or other material for this. As a last resort, just raise the flower bed above the level of the site, building a small elevation.

Lilies prefer soil with a normal level of acidity, if the soil in your area is too "acidic", then the problem is solved with dolomite flour or slaked lime. Also, to increase the level of nutrients, add some organic matter (peat, rotted compost) and superphosphate to the soil when digging. How do I prepare the bulbs for transplanting? It is necessary to carry out work in dry weather. Carefully trim the stems before removing the bulbs from their original location. It is preferable to dig out with a pitchfork, since in this case the risk of damaging the bulbs is much less. Then shake off or clean them of soil residues and carefully separate them from the mother's bulb of "babies". Remove any remaining stems, any damaged scales, and trim off any roots that appear dubious. The bulb should have approximately 14-16 cm of good roots. After that, it is necessary to carry out disinfection, for which they usually use a light pink solution of potassium permanganate or a solution of karbofos. In potassium permanganate, the bulbs must be disinfected for 15-20 minutes, and in karbofos for about half an hour.

When planting, remember to place the bulb at a depth equal to three times the height of the bulb. The planting distance depends on the type of lily, on how tall and spreading the plant will be. For short lilies, the distance between the bulbs should be in the region of 17-18 cm, for medium-sized plants - a little more than 20 cm, and for tall lilies - about 30 cm. Do not forget that over time, the bulbs will become overgrown with "children", so do not plant them too close. Having prepared the holes for planting material, pour some sand on the bottom, it will provide additional drainage. Then lower the onion into the hole, carefully spreading the roots, cover with nutritious soil and water well. Additionally, you can add a little peat on top of the soil to protect future lilies. 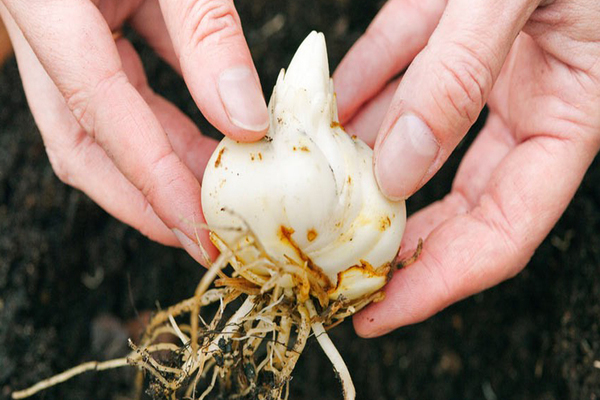 By listening to the opinion of experts in the cultivation of varietal lilies, as well as to the opinion of experienced summer residents, you can avoid many problems and grow gorgeous flowers.If you urgently need to plant lilies in the spring, you can do this by dividing the bush. To do this, you need to dig up the plant and carefully separate the “kids” with sprouts, without shaking off the soil from the bulbs and roots. Then plant each "baby" with a stem separately and water well. If you do everything carefully and quickly, then the lilies will perfectly take root in a new place. In order to prevent the bulbs from freezing in winter, the soil above them must be mulched. You can use hay, sawdust or dry fallen leaves as mulch. For the preservation of lily bulbs, the layer of mulch should be at least 10 cm. Lilies more easily tolerate a lack of moisture than an excess of it. Therefore, it is necessary to water them often, but little by little. Never use fresh organic fertilizers such as manure, bird droppings to fertilize lilies and other bulbous plants. There will be no benefit from them, and the bulbs can get burned.

Planting lilies is not a difficult process, especially if you prepare well for it by studying the necessary information. Be careful when digging up and preparing the lily bulbs, carefully prepare the place and the next year you will be guaranteed a lush and beautiful flowering.

Fertilizing cucumbers - all about fertilizers for open ground 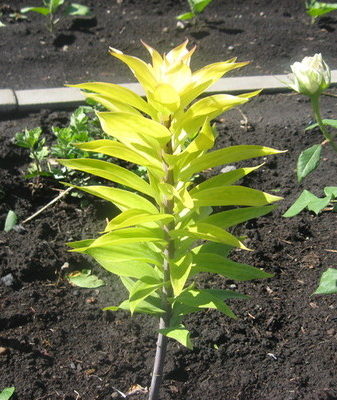 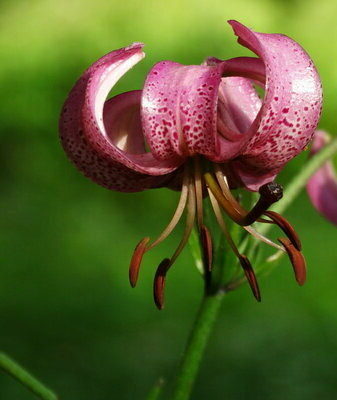 Lily Kustovaya
Bush lily is found in almost every second site. And this fact can be explained: the plant ... 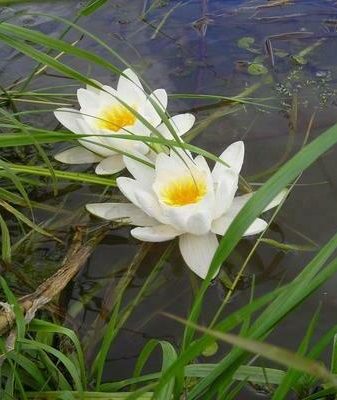