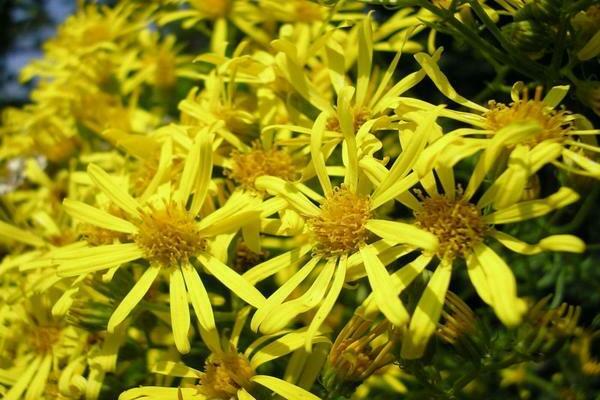 Rustic (Senecio) - belongs to the Asteraceae or Asteraceae family. Originally from the African continent from its southwestern part.

A groundwort is a succulent herbaceous evergreen annuals or perennials. Leaves can be varied in shape and size. Some of them have succulent rounded shapes similar to beads located on thin stems. Others have elongated shapes, the length of which is 3 cm, can have roundness in cross-section, or bend like a banana. When flowering begins, the plant is covered with small-sized snow-white funnel-shaped flowers with a diameter of 1 centimeter. They do not add decorative effect to the plant and do not attract attention, but they have a very pleasant aroma.

Reproduction takes place by seed and vegetative, namely with the help of cuttings.

In the first case, planting occurs exclusively in the spring. In the second case, the breeding procedure can be carried out during the spring-summer period. The length of the cuttings should be 10 centimeters. For rooting, they must be planted in wet sand.

This fragile-looking plant develops very quickly with little labor for caring for it. For good growth and development, he needs to provide warm conditions and, if possible, take it outside in summer and spring. Pruning is done with unnecessarily long stems that have become unkempt and losing leaves. They are cut to the very base.

Flowering begins in spring and lasts for 30 days, but usually the plant is grown for its ornamental leaves throughout the year.

This succulent plant can grow for a long time in drought conditions, so there is no need to constantly water it in the spring and even summer periods. Watering should be done if the leaves begin to wrinkle and lose volume.

The groundwort grows well under temperature conditions from +20 to +27 degrees during the spring-summer period, and in winter the temperature should be from +13 to +16 degrees. At this moment, the plant is dormant.

Resistance to diseases and harmful insects:

The groundwort rarely gets sick. Rot can develop if too much liquid is added and the liquid stagnates in the ground. Among harmful insects, one can find aphids, black nets, spider mites.

It is necessary to transplant a succulent only if necessary, for example, change the vase or earthen mixture. It has rather delicate and sensitive roots located near the surface of the earth. This is the reason why a flat container is best suited for growing. The best option would be to plant in clay pots, as they have good water and air permeability. 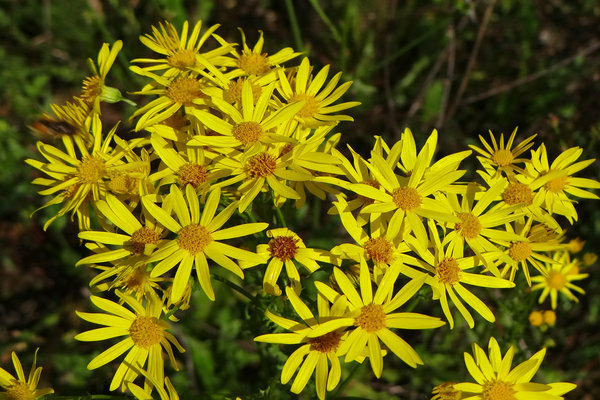 He prefers to be in partial shade, in places where bright sun rays touch him in the morning and evening for 4 hours.

The soil is suitable for the standard one used for succulent species and cacti. It should contain river sand.

Top dressing is carried out during the spring-summer period with intervals of 30 days. The fertilizer should not contain a large amount of nitrogen, and is used in half the amount indicated in the instructions on the package. For top dressing, top dressing for cacti is suitable.

This type does not require air humidification. He feels comfortable in room conditions, but is not tolerant of drafts. Heat sources should also be kept away from it. 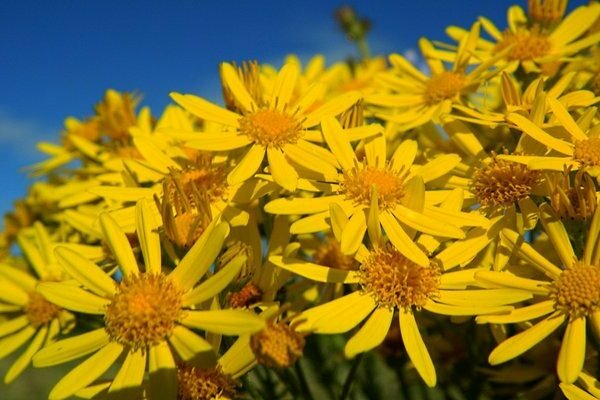 Hanging baskets will look very impressive with the groundwort in them because of its stems hanging from them. They can also be used as a ground cover plant.

If you properly care for the cross, this plant will be able to decorate the house for more than one year. When the plant begins to lose its attractive appearance, it can be replaced with a new one grown using cuttings.

It is important to remember that this plant is poisonous and should not be ingested. When working with him, you need to protect your hands with gloves.

Rowley (Senecio rowleyanus) - This species stands out from the rest, as it bears great resemblance to beads. It has creeping, thinnest and very flexible stems reaching a length of 90 centimeters. This species is green throughout the year and serves as a decoration for many years. The leaves are green in color, resemble a ball in shape and are densely located on the surface of long branches. All nutrients and liquid are contained in the leaves of this succulent. In summer, small, white chamomile-type flowers with a diameter not exceeding 1 centimeter can appear on them. Duration of flowering is 30 days. 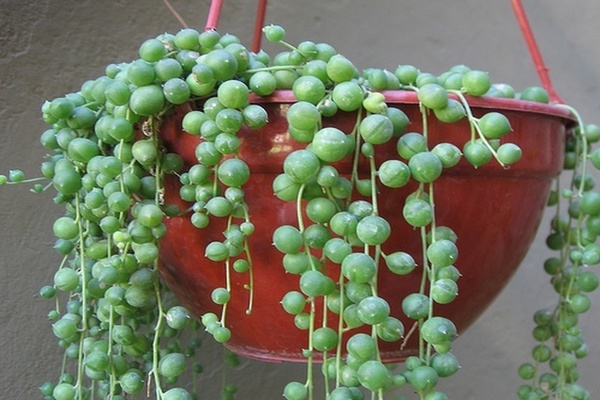 This variety will be an excellent home decoration grown in hanging pots.

There is also a species of Rowley variegated groundwort. Its leaves look like whitish peas with a green tint.

Common (Senecio vulgaris) - refers to herbaceous weeds of one year of life. Its stems up to 45 centimeters long are rigid, ribbed and practically do not branch. They are covered with green leaves of a palmate - dissected form and with short petioles. Their arrangement is alternate. The plant blooms with golden yellow flowers of small size. As soon as they begin to fade, fluffy white heads are formed on them, resembling dandelions. 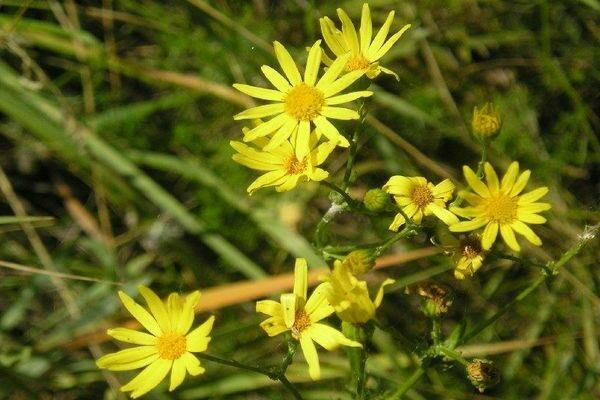 Large-tongued (Senecio macroglossus) - the owner of the finest, matted stems that have good flexibility, which makes it similar to ivy. Their length may not exceed 60 centimeters, and can grow up to 120 centimeters. The glossy green leaves are triangular or five-tipped. Root formation occurs in leaf nodes in contact with the soil. In case of damage to the stems and leaves, the plant emits a citrus aroma. During flowering, lemon-yellow flowers appear on it, the petals of which have an oval shape. Growing a species in an apartment, flowering may be regardless of the season, however, in summer, it is more magnificent. Among the varieties of this species, you can find those that have attractive variegated forms. The border of these leaves is painted with white paint.

Bicolor (Senecio cineraria) - This species of groundwort is also called ashy, silvery cineraria, seaside Jacobey. Refers to decorative, deciduous, evergreen herbaceous plants, up to 45 centimeters high. It comes from the Mediterranean countries. The stems of this species are covered with openwork silvery and dissected foliage. If cultivated in the garden, the flower can live no more than one year. It grows in the house for more than one year and after two years of life it is covered with bright yellow flowers with oblong petals like dandelions. Often, gardeners carry out the pinching of the stems, this makes it possible for the plants not to waste the energy in the formation of flowers.

Flat-leaved (Senecio platyphylloides) - the thin branched stems of this herb are covered with glossy, green heart-shaped leaves with finely toothed edges. Flowering begins in summer. At this moment, the formation of umbrella inflorescences occurs, collected from a large number of small flowers of golden-yellow color, the shape of which resembles a chamomile. 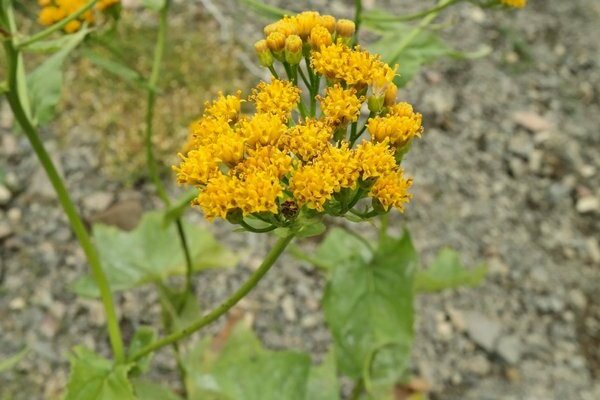 Jacob (Senecio jacobaea) - these plants grow up to one and a half meters in height. Powerful stems are covered with green, deeply cut, lacy green short-stalked leaves, which are arranged alternately.During flowering, large inflorescences appear, collected from yellow flowers, the diameter of which reaches about 2.5 cm. Towards the end of flowering, they become white and fluffy and form seeds in large quantities.

Red (Senecio pulcher) - the height of this perennial herb is from 60 centimeters to 1.2 meters. Slightly pubescent thin stems cover green leaves, the length of which is 10 centimeters. The plant becomes especially attractive during flowering, when flowers of pink shades or rich lilac color appear on it. They resemble chamomile in appearance due to their numerous petals and shapes. They have a yellow spot in the center. The diameter of the flower is about 5 centimeters.

Spring (Senecio vernalis) is a herbaceous species with stems covered with silver due to pubescence and highly branched. Leaves without petioles with slight pubescence are colored silvery green. Flowers are bright yellow in the shape of a chamomile. 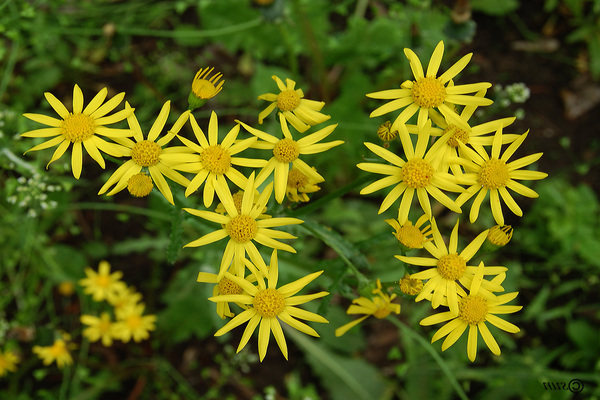 Cineraria bloody (Cineraria cruenta) - the owner of a very ugly name has a charming appearance. The leaves of this herbaceous perennial are rounded, green in color. Their surface is covered with hairs and has a reticular venation. This species has long flowering shoots on which large-sized flowers are formed, burgundy or pink, purple or bright red flowers. There are also two-color ones with a white center. Plants bloom profusely.

Graceful (Senecio elegans) - refers to an annual herbaceous species native to the southern part of the African continent. The sizes and shades of paints of the colors included in this group are different. Long flowering shoots during flowering produce flowers of raspberry, lilac or white, which, in turn, are neatly collected in beautiful inflorescences. There is a yellow spot in the center of each flower. They bloom for a long time. The stems are pitted with openwork green leaves.

Rooting (Senecio radicans) is a succulent decorative perennial with drooping branches covered with curved leaves that resemble a banana and have no petioles. They grow in length by 3 centimeters. Flowering occurs in the spring, at this moment the snow-white flowers emitting the aroma of cinnamon open. 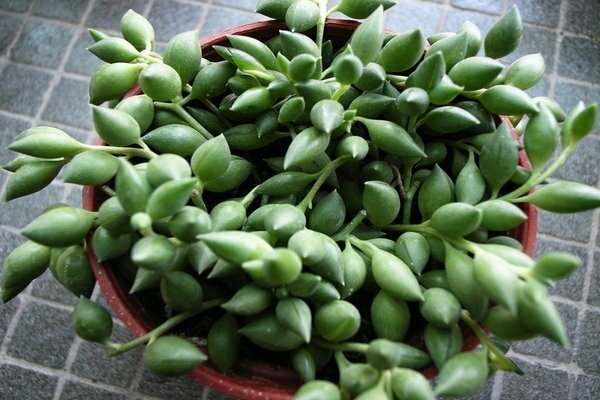 Erukolistny (Senecio erucifolius) is an evergreen herbaceous plant 60 cm high. Consists of branched powerful erect stems. The leaves are finger-dissected and have a glossy green surface. At the top of the flowering shoots, an inflorescence of small flowers opens. Their petals are narrow and painted in bright yellow colors. By the end of flowering, the flowers are rounded, turning into snow-white heads with a large number of seeds with parachutes on them.

Riverside (Senecio fluviatilis) - herbaceous perennials have stems, the surface of which is ribbed and with a quadrangular section. They are covered with glossy green leaves with a narrow linear shape, a concave central vein and with small notches along the edge. Flowering occurs in the summer. Then beautiful large inflorescences appear, which make up flowers of a yellow hue.

Tolstovy groundwort (Senecio crassissimus) - refers to evergreen deciduous succulents, its height is 80 centimeters. Its whitish, curving, thick and succulent stems are covered with rounded green leaves, which are covered with a waxy coating of a blue hue with pink and purple at the edges.Inflorescences are collected from small yellow flowers of which there are very few. 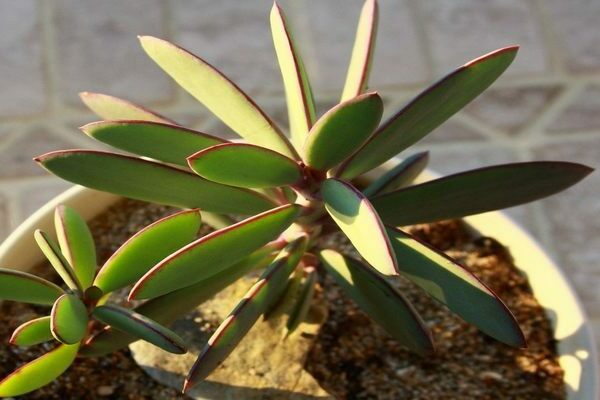 Haworta (Senecio haworthii) is an ornamental plant that belongs to long-lived deciduous succulents. Its stems are erect and begin to branch strongly at the very base. They are covered with thick, oblong and succulent leaves with rounded sections. The arrangement is alternate. The leaves are strewn with silver, which can be erased with a light touch. Flowers of juicy orange color are collected in inflorescences located on the tops of flowering shoots.

Creeping (Senecio serpens) - refers to decorative deciduous succulents whose length is 30 cm, stems grow up to 5 cm after several years of life. The shape of the long leaves is cylindrical and rounded in sections. You can recognize them by the blue tint of the leaf plates, which wears off with a light touch and only the green color remains. The formation of roots begins on the stems if they are lowered into the ground. When flowering begins, small snow-white flowers gather in inflorescences-shields growing on flowering bare shoots and cover the entire bush.

Senecio mikanioides is a type of decorative evergreen deciduous vine, the shoots of which are very long and flexible. They have glossy green leaves of a finger-dissected form. They look like ivy. Large inflorescences appear on the plant with the arrival of heat. They are made up of a large number of small yellow flowers and look like daisies. They bloom long and profusely. 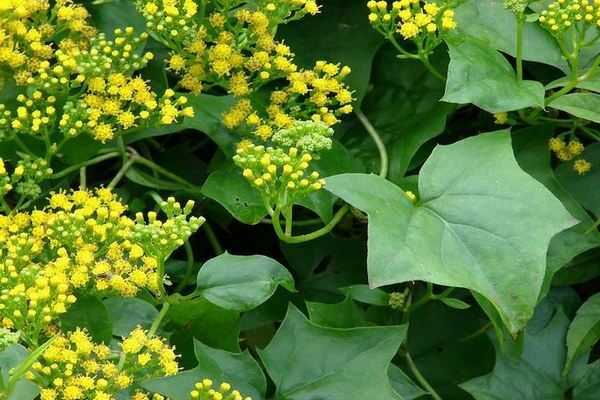 Glutinous (Senecio viscosus) - the shoots of this herbaceous plant are powerful, straight and profusely branched, covered with green laced leaves of a finger-dissected form. During flowering, it is covered with flowers that are yellow like gold, and after a while they acquire rounded shapes and white color.