Many gardeners and gardeners have been cultivating Chernomor gooseberries for more than one year. This variety is, as they say, time-tested. In the State Register of Breeding Achievements, it has been listed since 1994. The Chernomor gooseberry "earned" its popularity with good yield, resistance to various diseases, as well as high frost resistance of the variety, which makes it possible to grow berry bushes in many Russian regions. The demand for gooseberries of this variety is also due to not complicated agricultural technology and unpretentious care. At the same time, in order to obtain the maximum yield of berries, it is necessary to familiarize yourself with the characteristics of the variety, its advantages and disadvantages, as well as learn the rules of planting and care. 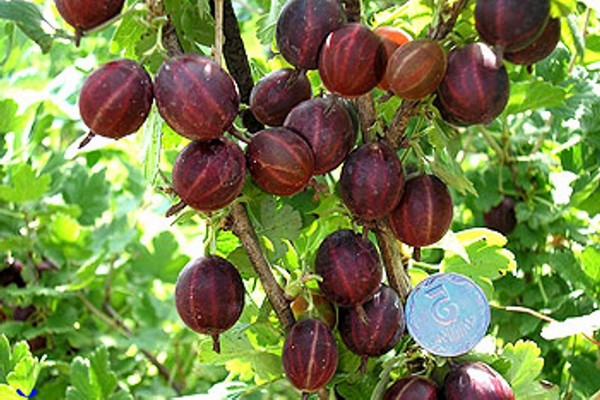 Gooseberry Chernomor belongs to varieties with medium late ripening of berries. For the rich dark color of the fruit, the gooseberry received several more names. Often, among gardeners, it is called the "northern grape" or "garden date". The gooseberry of this variety was bred by breeders of the Michurin All-Russian Research Institute of Horticulture on the basis of as many as four varieties, including: Date, Mauer Seedling, Brazilian and Green Bottle.

The gooseberry bush Chernomor is slightly spreading, but with a rather thickened crown. The branches are straight, light green in color, becoming even lighter over time. They can reach a height of one and a half meters. Shoots are weakly studded. The thorns are single, thin and rare.

By the way, do you know why Chernomor gooseberry thorns? Thorns are one of the ways of protecting a plant, for example, from not being eaten by animals, developed over a long evolutionary process. Currently, breeders have bred varieties that do not have thorns at all. However, experts note that such gooseberries, as a rule, have smaller berries. Therefore, such varieties are not suitable for lovers of large and tasty gooseberries.

The leaves of the Chernomor gooseberry variety are small, bright green in color. The leaf plate is embossed, the middle of the leaf is convex.

Chernomor gooseberry inflorescences are formed by two or three flowers with a convex shape. The flowers are painted in a pale green color, have a barely noticeable pink edging, and are small in size. Experts note the great value of the plant as one of the earliest melliferous plants. 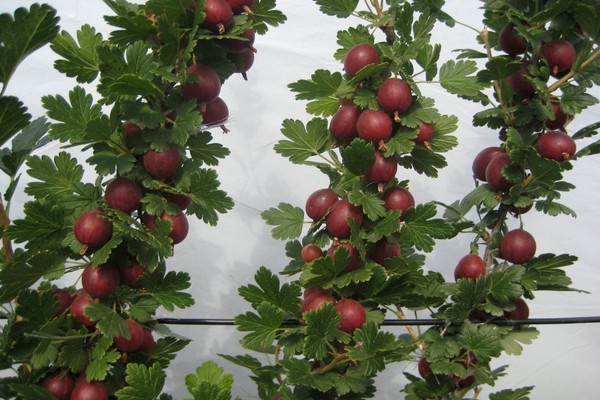 The weight of one berry is, on average, 3 grams. The yield of berries from one bush is up to 4 kg. The berries are oval, at the beginning of ripening they are colored dark red, and fully ripe fruits have a rich, seeming black color. The fruit tastes sweet and sour, the tasting score is 4.3 points. The sugar index corresponds to 8.5 - 12%, and the acidity to 2.5%. 100 grams of berries contain about 30 mg of ascorbic acid. The peel of the berries is quite dense, therefore, mechanized collection of fruits is possible, they tolerate transportation well and despair of good keeping quality.

Chernomor gooseberry berries are universal in use. They are great for making jams, marmalade, juices, jellies and, of course, preserves. Also, wine is made from them, used in the preparation of various sauces and jelly.

However, if possible, fully ripe fruits should not be left on the bush for a long time, since they are baked in the sun.

The gooseberry variety Chernomor is characterized by good drought resistance and tolerates not too regular watering well. This feature is due to the fact that the root system of the gooseberry is quite deep and the shrub compensates for the lack of moisture by pulling liquid from the deep layers of the soil.

In addition, as noted earlier, this variety is frost-resistant and, despite the fact that it is recommended more for the Central part, the Chernomor gooseberry is successfully grown in many regions with colder climatic conditions.

Advantages and disadvantages of the Chernomor gooseberry variety 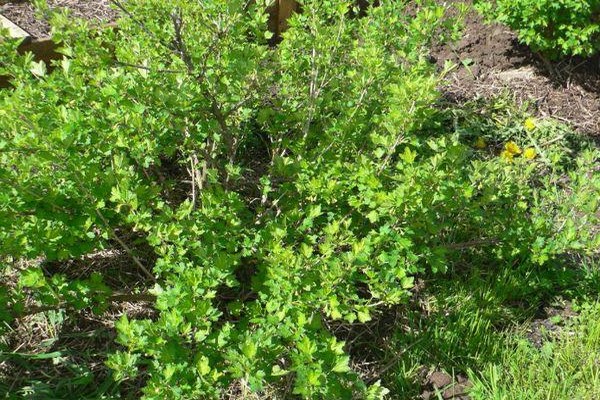 Among disadvantages varieties include the small size of the fruit and the rather rapid thickening of the crown of the bush. 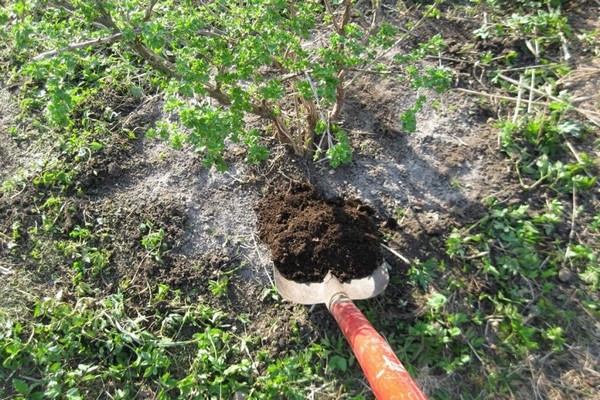 The most effective methods of reproduction include two-cuttings and cultivation of gooseberries with horizontal layers.

As a feature of the Chernomor variety, they note the high survival rate of gooseberry cuttings. In addition, grafting allows you to get the amount of planting material that you need.

For the cultivation of gooseberries by cuttings, as a rule, shoots of 2 years of age are used. Sections of approximately 10-15 cm are cut from the shoots and planted in soil, composed of garden soil, sand, peat and humus. Some gardeners, before planting, treat cuttings with root stimulants. If the cuttings are planted in separate containers, and not in open ground, then it is necessary to monitor the moisture content of the earthen coma so that the newly formed roots do not dry out and the cuttings take root faster.

Reproduction of gooseberries by horizontal layering involves the digging of shoots, which is carried out in several stages.

First, you need to choose a healthy shoot and make a small depression under it - a groove. Next, the shoot is carefully placed in the groove and pinned. The gooseberry shoots are quite strong and will try to "return to their place", therefore the fastening with which you will pin the shoot must be appropriate.

After fixing the shoot, its palatine is covered with earth and watered.

In the fall, rooted cuttings and cuttings are planted in the selected area. 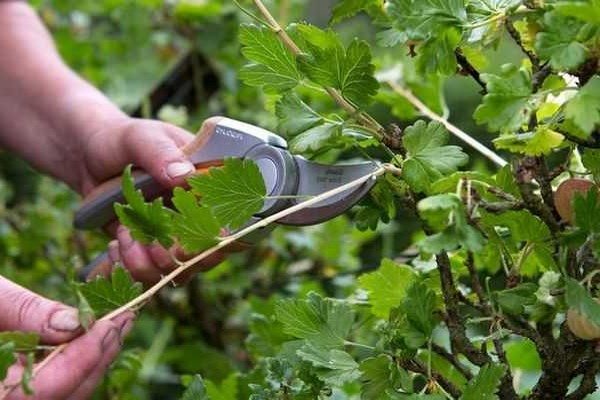 The soil on the site, if possible, should be loose and breathable.Loams are well suited for growing varieties, as well as forest-steppe soils. However, in any case, regardless of the quality and type of soil, when planting gooseberries, potassium-sulfate and phosphate fertilizers must be applied.

Gooseberries can be planted both in spring and autumn. In spring, the time of planting seedlings falls on the period when the snow has already melted, but the sap flow has not yet begun. And in the fall, no later than a month before the onset of cold weather, so that the seedling has time to take root and prepare for winter. 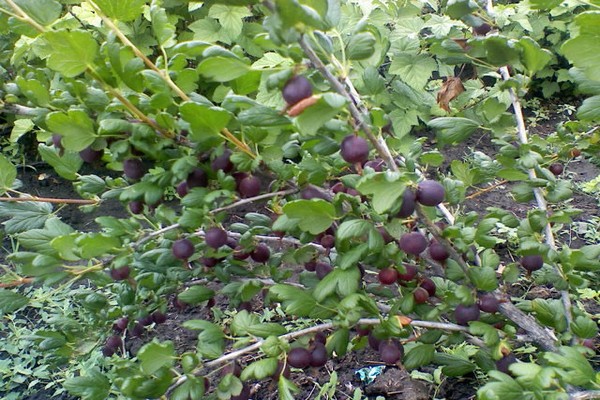 There is no need to rush when choosing planting material. The seedling should be carefully examined. It should not have any mechanical damage or signs of disease. Experts recommend purchasing a plant with an open root system, by the type and condition of which one can judge the quality of the planting material. When buying seedlings in containers, focus on the length of the shoots, it should be at least 40 cm.

Before planting, the roots of the seedling are slightly pruned, the shoots are also shortened, leaving no more than 6 buds. Further, the plant is placed in a solution of a root formation stimulator for half an hour.

The size of the planting pit should be at least 40 cm in length and width, and approximately 30 cm in depth. If you plant several plants at once, then the distance between them will be 1.2-1.5 m.

At the bottom of the hole, fertile soil is poured, mixed with humus, and a small mound is formed from this soil mixture. The seedling is placed in the center, not forgetting to spread the roots. In addition, it is important not to deepen the root collar by more than 5 cm. After that, the hole is covered with soil, the soil is tamped a little and the plant is watered abundantly. Gardeners recommend mulching the near-trunk soil without fail. 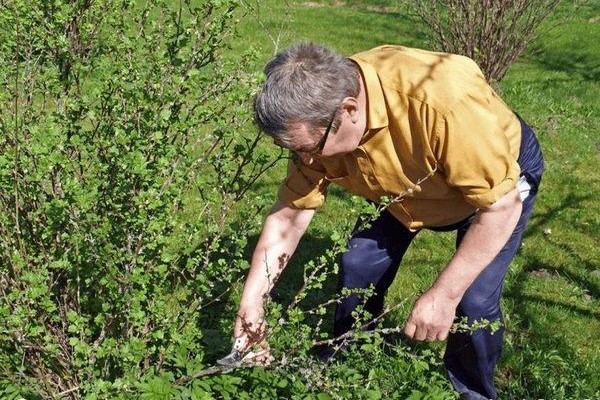 Caring for the gooseberry does not present any difficulties, it is enough just to follow agricultural techniques.

So, several times throughout the season, you need to ensure abundant watering of the plant. Especially gooseberries need additional moisture at the moment of inflorescence and flowering, when ovaries appear and fruits ripen, as well as after picking berries. It is important not to let water get on the leaves by watering only at the root.

To get a good harvest, the shrub needs pruning. Pruning begins from the second year after planting, leaving no more than 4 skeletal branches. Other branches belonging to the second or third order are thinned annually, given the tendency of the shrub to thicken. This procedure greatly facilitates the picking of berries, and also helps to ventilate the crown.

If all the necessary fertilizers were applied during planting, then the next top dressing can be done only in the fourth year. Potassium-sulfate and phosphate fertilizers, as well as organic matter and wood ash, are again introduced into the soil of the trunk circle. Such dressings are carried out every three years. But it is necessary to loosen and mulch the soil annually. By the way, you can add a certain amount of organic matter to the mulch composition, which, in addition to preserving soil moisture, will also fertilize the plant. 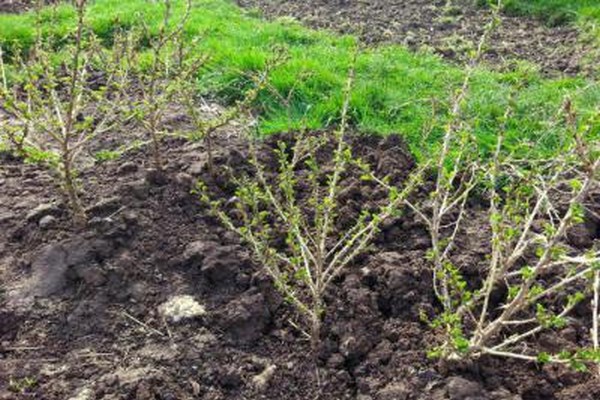 In the first few years, in order to avoid damage to the bush by gusts of wind, it is provided with support by tying the plant to a peg or trellis.

Despite the fact that gooseberries are slightly susceptible to diseases, prevention of their appearance should not be neglected. To do this, in the spring, it is enough to treat the shrub with a solution of wood ash or Karbofos. The latter is also a means of preventing pests. To protect against them, the shrub can also be treated with a Samurai or Fufanon.

Autumn care for gooseberries involves weeding the trunk circle, since pests often hibernate on weeds, as well as loosening and mulching. In this case, the layer of mulch, which will serve as a shelter, should be slightly thicker. In regions with rather harsh winters, they also practice sheltering shrubs with special material, for example, agrospan. 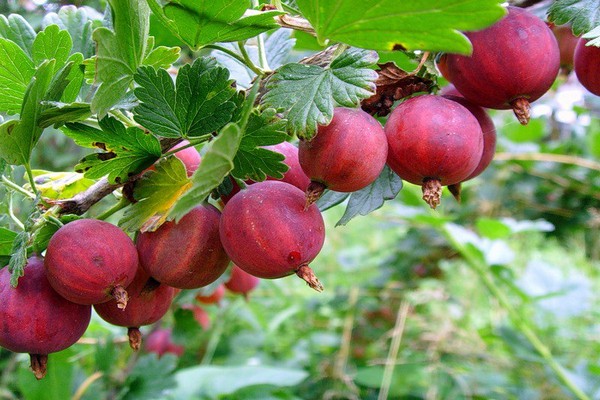 Gardeners who have been growing for several years gooseberry Chernomor, identified it as the number one variety.

The shrub gives a stable harvest of sweet and tasty berries. Some gardeners point to their pleasant wine aroma. According to others, the taste of berries is characteristic of gooseberries and nothing more, however, they note that in terms of the resistance of the variety to weather conditions and damage to diseases, Chernomor is one of the best.

And, of course, on the positive side, they note the weak studding of the bush, which facilitates harvesting. But it is not recommended to hesitate with picking berries, since overripe berries lose their taste.

Thus, the Chernomor gooseberry variety is deservedly one of the most popular and demanded gooseberry varieties. Observing the agricultural technology of growing this variety, as well as taking into account its resistance to changes in weather conditions and damage to diseases, you will always have a good harvest of berries.

Gooseberry Chernomor: video about the variety

How to store the crop? Valuable storage tips 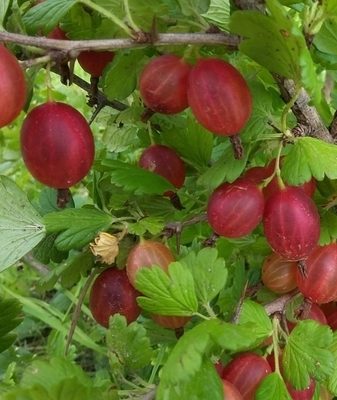 Gooseberry Masheka
The article presents the Mashek gooseberry: a description of the variety, its dignity, planting rules, care, ... 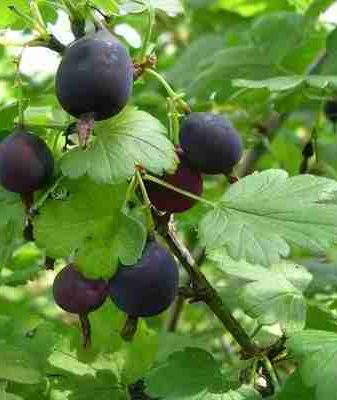 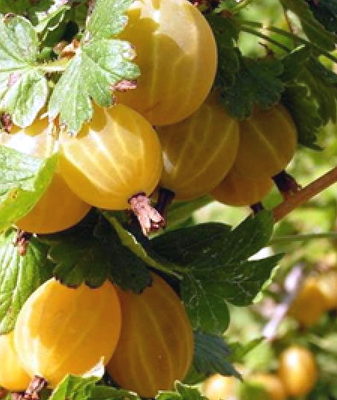