Terry tulips are a perennial herbaceous bulbous crop from the lily family. A tulip can grow in the same place for several years. Tulips are different: 1) Simple; 2) Fringed; 3) Lily-colored; 4) Parrot; 5) Terry. Not a single spring period can be imagined without the participation of tulips. Each variety has its own characteristics and nuances of cultivation.

At the moment, there are more than five and a half thousand varietal varieties around the world. Terry tulips are not as famous as the rest of their cousins, the number of copies is approximately equal to ten percent of the total. But they have been known for a long time. The very first double tulip hybrid, which turned a part near a flowering area into an added petal circle, appeared naturally. Experienced breeders collect only the most interesting varieties that have turned out due to accidental cross-pollination. This is how in the twenties of the seventeenth century tulips were introduced in Holland under the name Duke Van Toll. They were not a very tall plant, no more than fifteen to twenty centimeters.

Terry tulips: video about the variety

Very often double tulips are called peony tulips. Such a comparison is justified, because they really have similar features. Moreover, during the flowering period, the inflorescences become so large and lush that they can even lean to the ground.

There are only three of them:

There are a lot of them, but there are still those whose splendor cannot be disputed.

Early double tulips are rather massive and dense flower bushes. In most varieties, the stem reaches a height of ten to fifteen centimeters. In some varieties, the central stem can reach twenty to thirty centimeters, but this is a very rare occurrence. The flower itself is not very large, it can reach a diameter of eight centimeters. Often, early double tulips, when used in landscape design, are planted near paths, paths, arbors, fences. But they can also be grown at home in a flower pot.

The early terry tulip species has many different varieties. Among them, there are plants that have such benefits as: 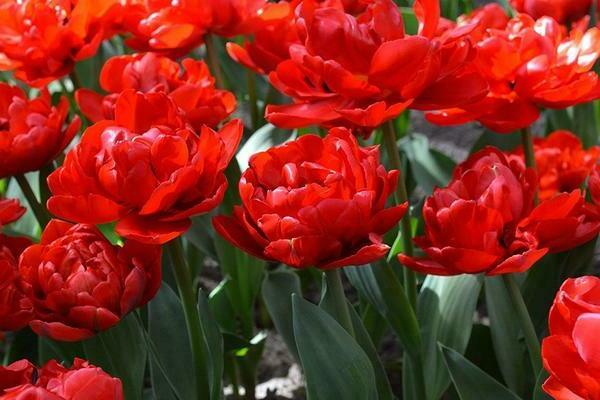 The Abba terry tulip variety came to us from Holland. It has very low but dense bushes. Flowers resemble a semicircle, deep red, up to six centimeters in height, and up to ten centimeters in diameter. At the very bottom of the petal row, there is some kind of protection, a dark green hue. This type is quite resistant to cold weather. It begins to bloom in mid-spring. He also has such an advantage as amicable flowering. The terry tulip Abba blooms for fifteen to twenty days. 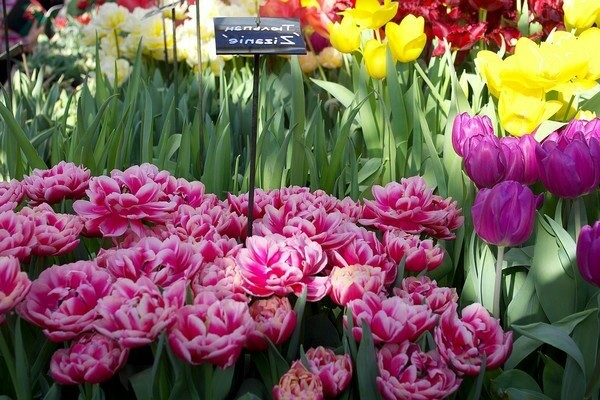 This is probably the earliest variety. After all, it begins to bloom in the early to mid-spring period. Flowers of a very unusual appearance. Petals of a rich dark pink hue, which have a beige edging. In their height, they can reach forty-five centimeters. 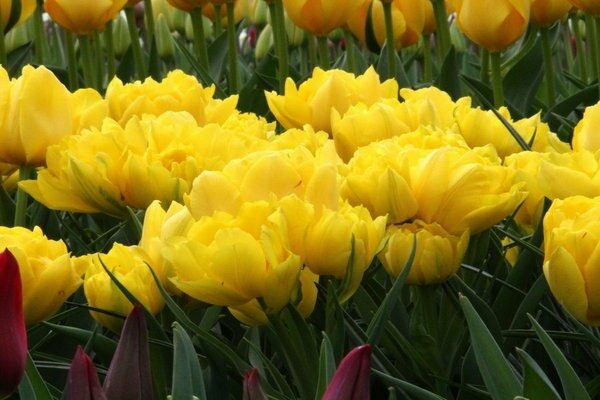 A very unusual and beautiful variety. Inflorescences are lemon yellow. In its height it can reach thirty centimeters. It begins to bloom in mid-spring. Its flowering can last ten to fifteen days. 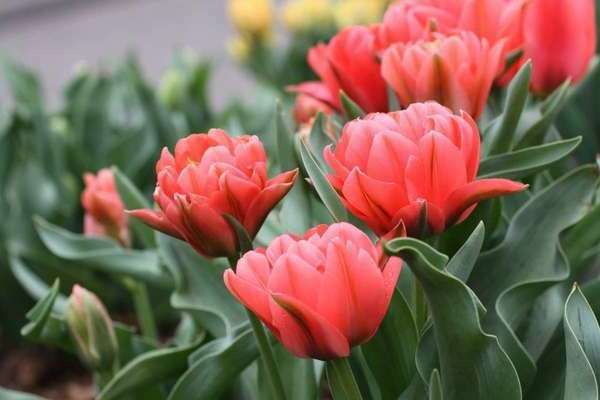 Flowers of this variety are somewhat reminiscent of cactus flowers. A very exotic look. It occurred in the process of cross-pollination with a variety called greig. The bush of the plant itself is quite large, there are a lot of inflorescences. The petals are narrow, oblong and slightly pointed at the end. The color is dark orange. 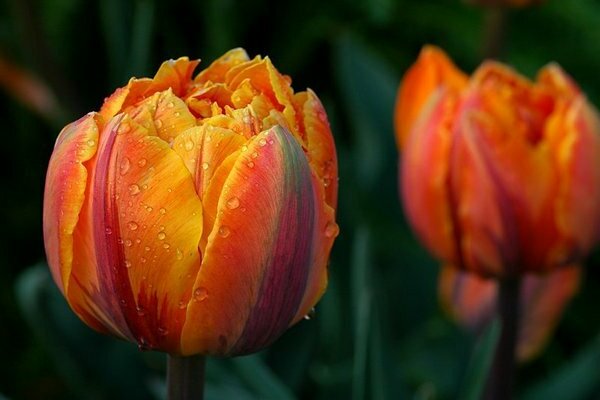 This is a very old variety. The flowers are bright yellow-orange with slightly noticeable red stripes. They are somewhat similar to rose inflorescences. They appeared before the whole world, at the exhibition in one thousand nine hundred and eighty-three, and since then, they have only been gaining their popularity, which is quite difficult to dispute. In its height, the bush of a terry tulip Orange Princess can reach forty centimeters. Blooms for a long time. Differs in excellent resistance to various diseases. 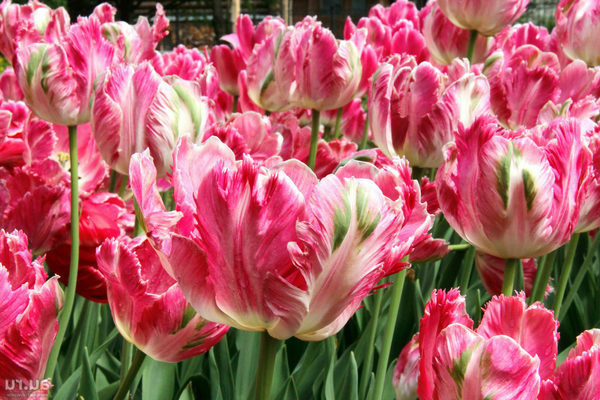 This variety has deep red inflorescences with beige edging and green stripes in the center of the petal. 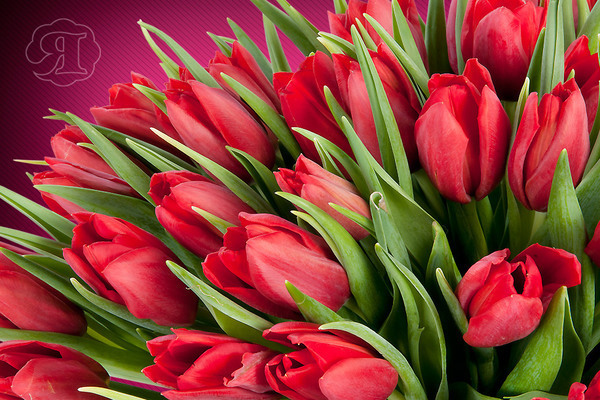 Quite an unusual variety. Inflorescences of deep scarlet color, which are distinguished by mother-of-pearl tints.

Late double tulips have rather large bushes that can reach forty to sixty centimeters in height. One flower can have three to four petal rows. But there are also those inflorescences that reach a larger number of petals. The flowers of late double tulips are quite large, they can be either one color or interspersed with a different shade. The color palette is very diverse, from snow-white to deep black. These varieties are often decorated with alleys, parks, flower beds near buildings. They are also often used to compose bouquet arrangements.

These are very beautiful plants, thanks to them, breeders develop multilayer varieties. Each petal of such a plant is decorated as if with cilia, which looks very unusual. Roughly speaking, these are varieties in which both fringed and terry varieties are present. For example, you can name such varieties as: 1) Brest; 2) Mascott; 3) Wai Kon Dios and many others.

The late double tulip has a large number of varieties in its armament. 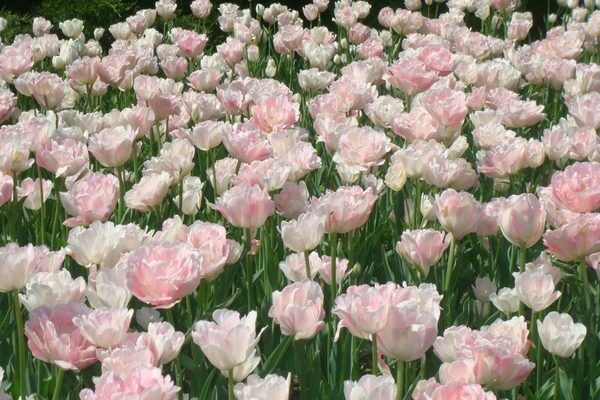 The late double tulip variety Angelica was bred for a long time, but it still does not lose its popularity. Inflorescences of a pale pink shade with barely noticeable white blotches, are distinguished by their fragrant aroma.The closer to the flower's full disclosure, the more it becomes visible in the orange shades, which makes the flower even brighter than it is. Over time, thanks to the late terry tulip Angelica variety, another variety was bred, with a bright orange tint of flowers. 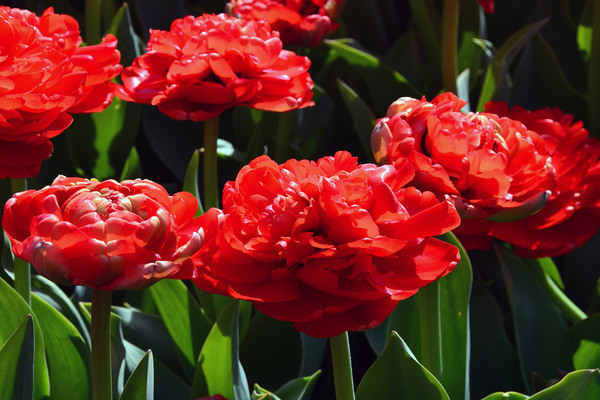 The late terry tulip Miranda variety was also bred for a long time. The stem is very sturdy and strong. The flowers themselves are quite lush, saturated with a red hue. It is distinguished by its resistance to various diseases and variable temperature conditions. The flowers are densely double, just one inflorescence can count more than fifty petals. Terry tulip Miranda blooms for fifteen to twenty days. 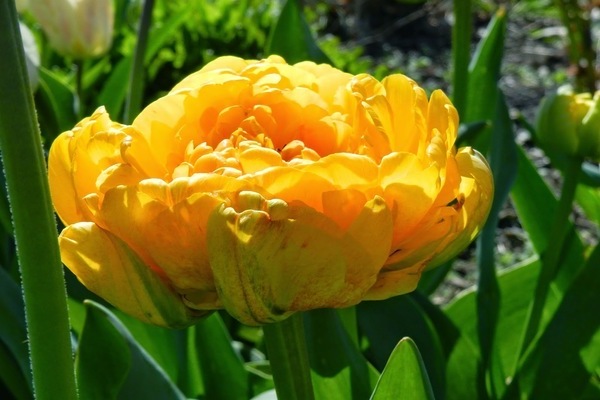 Their appearance is very similar to peonies. The color scheme ranges from lemon yellow to deep red. There are a lot of petals in the bud. There are varieties that have yellow or red streaks. The buds open very slowly, in their diameter they can reach twelve centimeters. 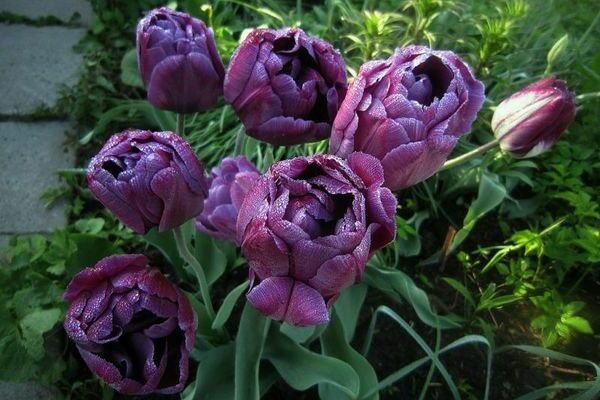 Quite an exotic variety that has large inflorescences of a dark purple hue. High degree of terry differs. The petals themselves are wide, often doubled, and due to the presence of veins of a darker shade, one might think that they are wavy. In its height it can reach twenty five to forty centimeters. The stems are strong and sturdy. The plant is resistant to strong wind currents, thereby protected from lying to the ground. It begins to bloom at the end of the spring period, but can continue until the beginning of the summer period. 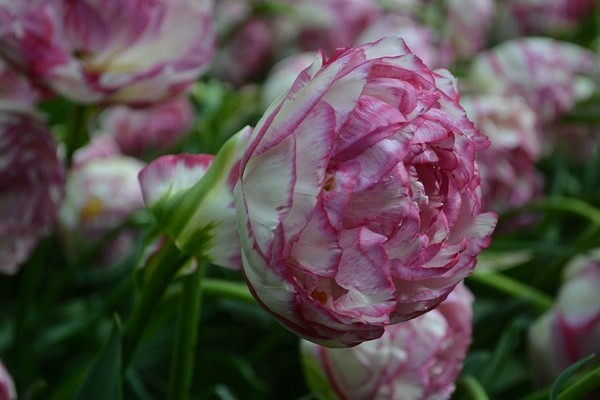 Looking at the photos of the inflorescences of the Double Touch double-touch tulip variety, you might think that this is a peony. The buds of the plant look like small balls. The petals are pale yellow with a bright pink border. In its length it can reach fifty centimeters. The stems are very strong and firm. Initially, the bud is pale beige, but when it begins to bloom, a bright pink border becomes visible. Often, the late double-touch tulip variety is used when drawing up flower arrangements, because it can stand in water for a very long time in a cut state. 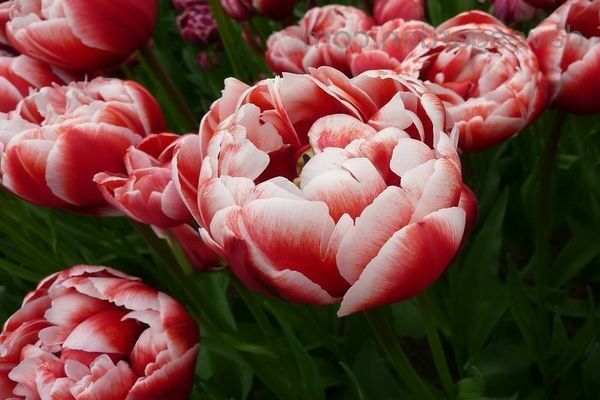 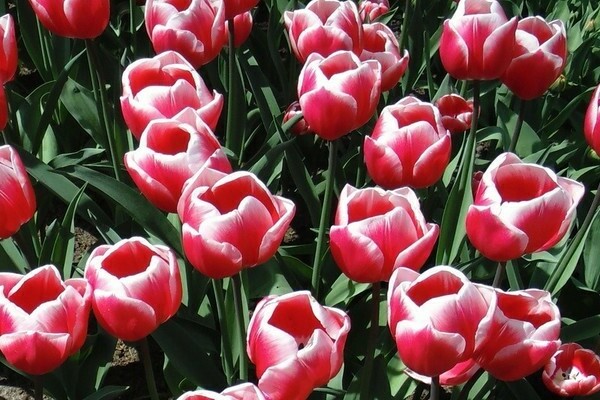 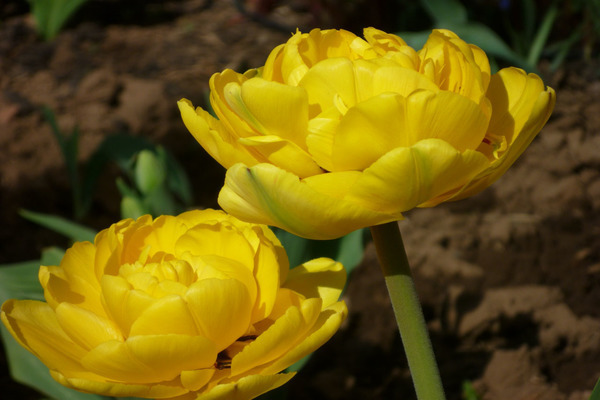 Unusual flowers of an orange-yellow hue. 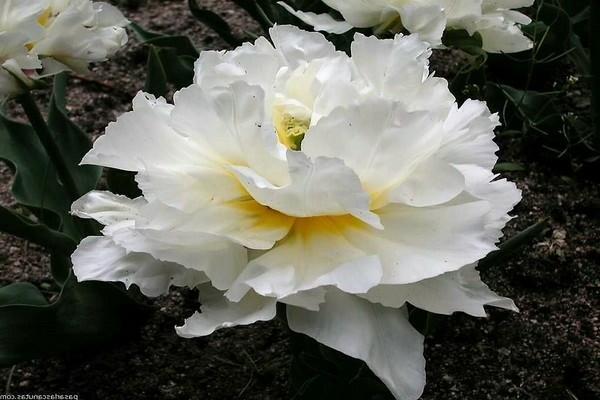 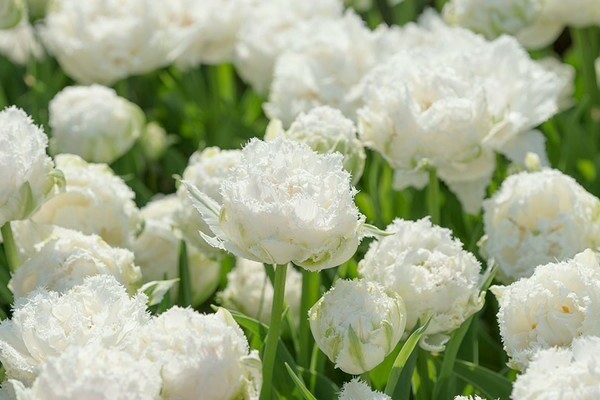 From a distance, you might think that these are just shaggy white balls. In its height, it can reach eighty centimeters, and the flower itself has a diameter of twelve or more centimeters. 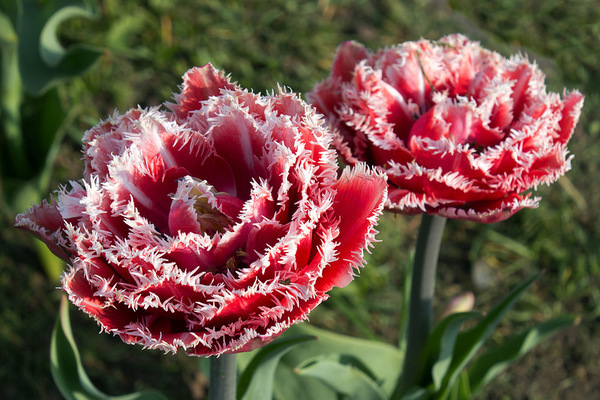 This is a fringed variety that is distinguished by the layering of its petals. The flowers themselves are rich in red with a whitish border present, and there is also a beige fringe on them. 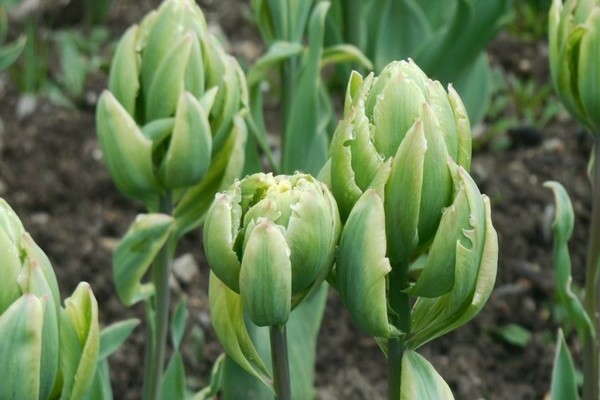 It's a hybrid. The plant itself is quite exotic, because its flowers are pale green. 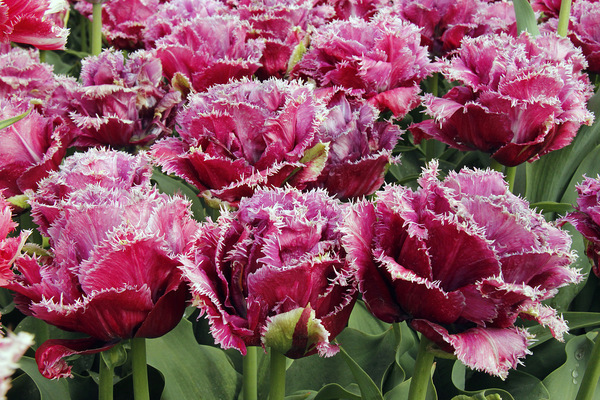 It is a fringed variety with a high degree of dense doubleness. The flowers are not very large, in diameter they can reach five to seven centimeters, but it is worth noting that they have a huge number of petals. It can grow up to forty centimeters in height. The stems are very firm, strong and thick.The flowers are bright pink in color, and the eyelashes, that is, the terry is white, which makes you think that the plant is covered with frost.

The most exotic varieties

In this variety, there is such a variety as the ice cream terry tulip. It is two-tone. You can describe it as if you put snow-white ice cream in a hot pink glass. Its petals are bright pink with green backs. One more white petals can be seen from the common bowl of petals - that same ice cream. Ice cream, it becomes visible by the degree of opening of the buds. Terry tulip Ice Cream is a very rare and exotic variety.

Terry tulips: care for the view

Growing rules are the same for almost all varieties. But terry tulips have their own nuances in growing.

Provide a comfortable and supportive culture for your culture. Surround terry tulips with love and care and then they will thank you with bright and abundant flowering. And you, in turn, can paint your garden in all kinds of colors.

Coca-Cola from aphids: how to breed correctly and get rid of aphids forever

Cherry Pamyat Yenikeeva: description of the variety, cultivation and photo 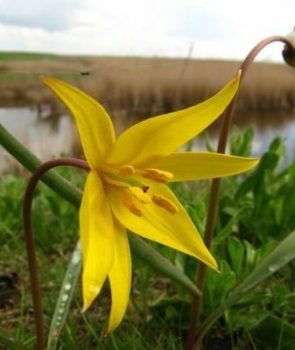 Tulip Bieberstein - description, planting and care
Tulips are among the first plants that begin to delight the eyes of garden owners with the arrival of ... 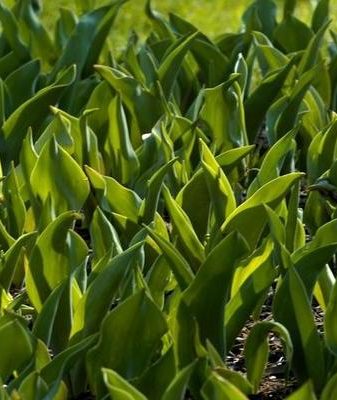 Why tulips don't bloom
The article gives an answer to the question of why tulips do not bloom: the influence of the quality of the bulbs is considered, ... 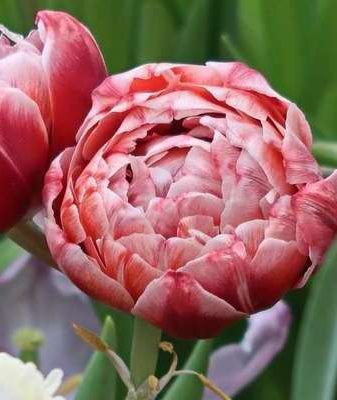