Blackberry is a related shrub plant of raspberries, belonging to the Pink family. Blackberry fruits differ from raspberry ones not only in color, but also in structure: when picking blackberry berries, the fruit is not extracted, as is the case with raspberries. The taste of blackberry fruits also has its own unique bouquet, and they themselves have a valuable chemical composition. It includes trace elements necessary for the human body such as calcium, iron and magnesium, vitamins (ascorbic acid), flavonoids. All these useful substances help to improve the work of the cardiovascular system, to cure diseases of the gastrointestinal tract, skin, manifestations of allergies. Healing properties are possessed not only by blackberries, but also by its leaves, which are brewed as tea. Blackberry bushes have an extensive root system that goes deep into the ground, thanks to which they can get more water and nutrients from the soil than raspberry bushes. For this reason, blackberries are more drought tolerant and require less watering and fertilization. Of course, planting blackberries is also different from raspberries, which we will talk about later in this article.

An interesting fact: From one blackberry bush, on average, you can get up to 15 kg of tasty and healthy fruits, which in general exceeds the yield of raspberries. Blackberries are characterized by a larger berry size, as well as the ability to form multiple ovaries..

Planting and growing blackberries - what problems can arise? 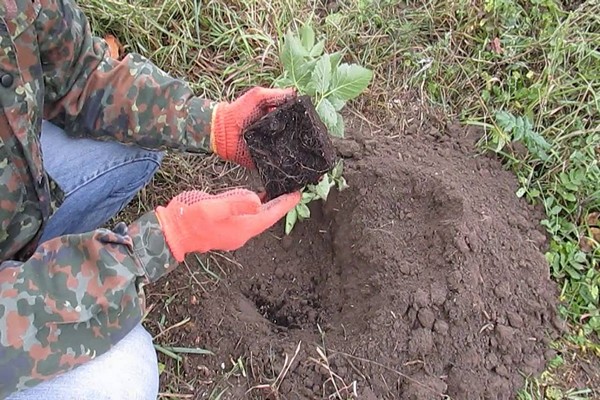 The difficulties associated with growing blackberries are primarily associated with the climatic characteristics of a particular region. Fruiting of blackberry bushes occurs quite late, therefore, in the northern regions with a short summer and an early arrival of winter cold weather, the cultivation of this crop is quite problematic. To date, thanks to the efforts of breeders, winter-hardy blackberry varieties have been bred, which successfully take root in the North-West region, the Urals and Siberia. As a rule, these are early ripening varieties, harvesting from them is carried out at the end of summer.

In the southern regions, gardeners are more likely to harvest a bountiful harvest from late blackberry varieties, however, in this case, there are a number of difficulties. Exposure to bright sunlight and too high air temperature negatively affect the external and taste qualities of blackberries.

Due to the emerging difficulties in growing blackberries, a competent choice of a place for planting it is a decisive factor affecting the success of the entire event.

Choosing a place to plant blackberries 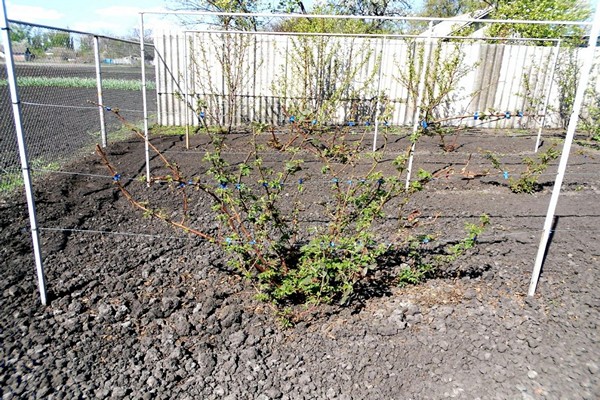 The placement of blackberry bushes on the site is largely dictated by the climatic features of the region. Depending on them, blackberries are grown in open or closed ground.

For regions with cool summers, a prerequisite is the creation of a shelter for the blackberries, protecting the plants from the gusts of the north wind. For this reason, gardeners in central Russia prefer to plant blackberry bushes along fences, near higher shrubs and trees, natural hills. It is also advisable to plant blackberries in well-lit and sun-warmed areas so that the berries have time to ripen completely in a short summer period.

Many gardeners take advantage of the experience of planting grapes and plant blackberry bushes near the south side of buildings or hedges, while maintaining a gap of at least 100 cm between the plants and the defensive structure. Placing blackberry plantings in lowlands should be avoided, as cold air accumulates in them. The tops of high hills and hills are also not suitable for growing this thermophilic crop, since in winter the wind will blow snow from the site. The snow cover performs a protective function and protects the bushes from the effects of severe frosts.

Swampy soils that are often found in central Russia are categorically unsuitable for growing blackberries. Excess moisture in the soil causes excessive elongation of the shoots, thereby slowing down the ripening of fruits and reducing the plant's resistance to frost. For blackberries, areas are suitable where the groundwater level is no higher than one and a half meters from the soil surface.

As for the southern regions, it is easier to choose a site for growing blackberries on their territory. Unlike raspberry bushes, blackberry bushes tolerate the dry summer months well and begin to grow actively with a moderate rate of watering. However, gardeners in southern Russia are faced with another problem - the need to protect blackberries from direct sunlight during the day. Exposing the berries to the open sun at noon can damage them. For this reason, shading is a prerequisite for the successful cultivation of blackberries in the southern regions. In the north, on the contrary, partial shade can cause slow growth of blackberry shoots - in such conditions, only the most cold-resistant varieties take root ("Ufimskaya mestnaya", "Agavam"). 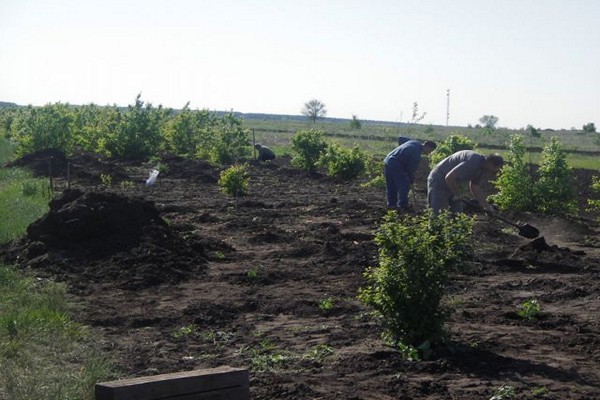 Planting blackberries in the greenhouse

Growing in a greenhouse is ideal for varieties with extra large berries, for which full ripening is especially important. Gardeners of the Siberian region and central Russia in this way get the opportunity to lengthen the growing season of blackberry bushes. Thanks to the use of modern synthetic materials such as agrofibre, the construction of a protective structure is not difficult.

When growing blackberries in a greenhouse, you need to take care of their regular airing. Otherwise, on hot summer days, there is a high probability of overheating of the plants. It is best to choose a design with a sliding or removable roof: this will allow the blackberry bushes to winter under the snowdrifts. Wintering under the snow is not only not dangerous, but also obligatory for blackberries - without a reliable snow cover, its bushes are likely to freeze, since their root system does not have the frost resistance characteristic of raspberries. 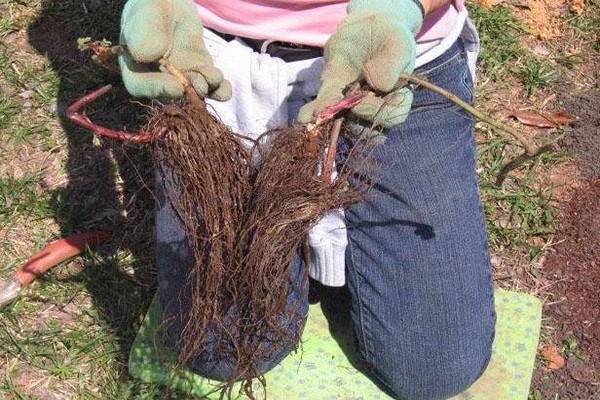 The preparatory stage of planting works involves marking the site. It is recommended to plant the blackberry bushes in rows, keeping the spacing between them, which depends on the plant variety. Garden blackberries are divided into two large groups - blackberries Nessky or cumanik and blackberries lash-shaped or dewberry. Kumanik differs in the presence of erect stems, gives numerous basal offspring, which can be used for its reproduction. Rosyanika releases semi-creeping shoots of great length, therefore, the method of reproduction by apical layers is more effective for it, which brings it closer to black raspberry. To date, hybrid varieties have been bred that combine the features of both species: their erect shoots, upon reaching a certain length, begin to droop.

The variety of blackberries affects the distance that should be left between the bushes when planting them. If an interval of 80 to 100 cm between bushes and from 200 cm between rows is sufficient for kumanik bushes, then in the case of dewdrops this is not enough.To prevent its spreading shoots from intertwining, it is recommended to plant individual bushes at a distance of at least 150-250 cm from each other. The recommended spacing between rows is 250 to 350 cm. In any case, it is necessary to place the bushes so that they receive enough sunlight. Regardless of the variety, it is advisable to tie up the shoots of blackberry bushes to the trellis.

Planting blackberries in autumn and spring 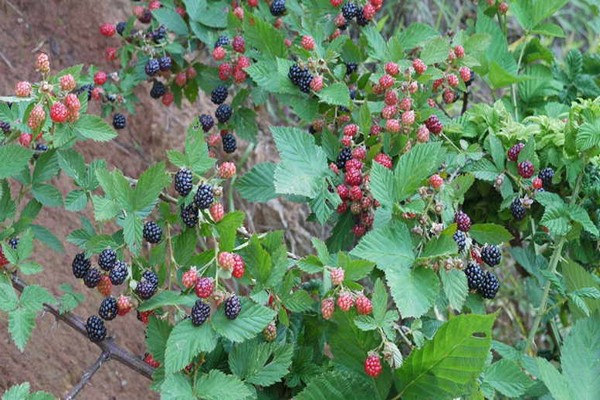 Autumn or spring time is suitable for planting blackberries. This primarily applies to planting material with an open root system. Spring planting should be carried out before the start of sap flow in plant tissues. Autumn planting occurs during the period of foliage falling. Since blackberries fly around quite late, it is recommended to remove the leaves from the seedlings to prevent moisture evaporation.

Gardeners of central Russia and the northern regions prefer spring planting, since in conditions of the early arrival of winter cold weather there is a high probability of frostbite of the root system of young plants.

Planting in open ground seedlings grown in containers with soil while maintaining a closed root system can be carried out in the spring-summer period - no later than the end of June. In this case, it is vital to provide shelter from the sun's rays, which can burn the ground parts of the blackberry bushes.

The quality of the planting material

The correct choice of seedlings is also an important factor in determining the success of planting blackberries. Young bushes under the age of 2 years are best suited for this purpose. Adult and overgrown blackberry bushes hardly take root in a new place and often die.

The survival rate of blackberry seedlings with an open root system is lower than in the case of closed roots. For this reason, experienced gardeners acquire 2 or 3 shrubs of each variety at once. Due to self-fertility, blackberries do not need cross-pollination of different varieties, so in one area you can safely plant both blackberries of the same variety, and different varieties. The slow formation of fruit ovaries during normal flowering is associated not with a lack of pollination, but with a slight frostbite of the buds in winter.

When choosing seedlings with an open root system, preference should be given to specimens with developed strong roots, as well as with foliage of a healthy bright green color. Kumanik seedlings have widely spreading roots, giving numerous basal processes that are used for propagation of blackberries. In insufficiently loose soil, kumanik delenki form taproots that do not have shoots. Rosyanica has a fibrous root system, with densely woven processes.

Another sign of the health of a seedling is the presence on its stem at the very base of several dormant buds of white or light pink color. This means that next year new shoots will appear from them. 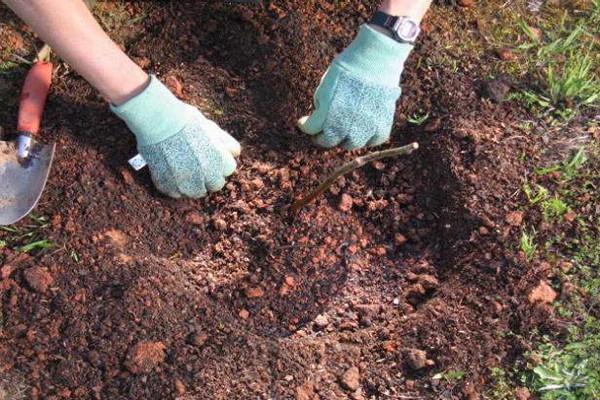 Of all soils, blackberry prefers moderately loose loams with a neutral or low acidity level. In general, this culture does not differ in its exactingness to the quality of the soil, therefore it successfully takes root on depleted stony soils. Too acidic soil can be corrected by adding lime. Alkalization of the soil is also undesirable, since in this case the blackberries will not absorb magnesium and iron, which can cause chlorosis, which is expressed in yellowing of the foliage.

It is recommended to prepare planting holes for blackberries ahead of time: it is necessary to start preparing for spring planting in the fall, for autumn - in summer.

The optimal dimensions of the planting recesses on loose soils are 0.5 m in all respects. The poorer the soil, the larger they should be. Pour nutritious potting soil at the bottom of each hole and fill it 2/3 full.The composition of this mixture includes the earth extracted during digging, as well as nutrients. Each well contains 5 to 10 kg of rotten organic matter (compost or manure), from 100 to 150 g of superphosphate (double or simple), 50 g of potassium sulfate, 20 g of magnesium sulfate, 0.1 kg of wood ash. A little earth is poured on top of the nutrient layer - it will protect the roots of the seedlings from the effects of concentrated fertilizers. Heavy loams can be made lighter by adding some peat or sand. The quality of sandy loam soils is increased by the addition of clay to them.

The planting hole prepared in this way is left until the moment of planting. During this time, nutrients will settle with the soil and mix.

Another way to plant blackberries is plant seedlings into the trench. In this case, the fertilizer application rate is calculated for each running meter of the bed. This method is used over large areas. 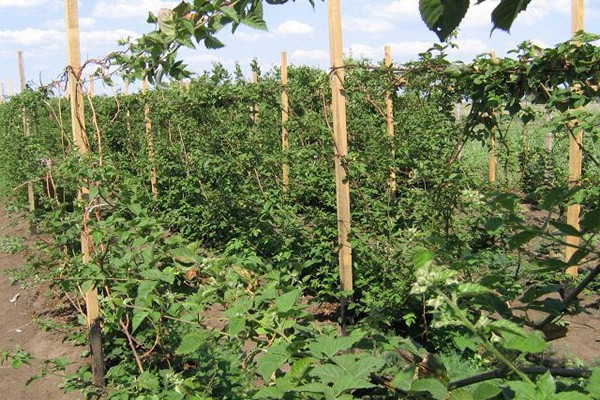 Grouse for laying hens: TOP tips how to give? How much to give?