Rose Pierre de Ronsard (Pierre de Ronsard). It is preferred by most gardeners, both amateurs and professionals. It was bred by a French breeder in 1985. It got its name in honor of Pierre de Ronsard, a poet from France. But due to the fact that only the inhabitants of France knew this French romantic who lived in the 16th century, the breeders came up with another name - Eden Rose. This name is considered international, but such roses may have other varieties. For example, the climbing rose variety of the same name, Eden Rose, is the only one of its kind.
This variety, due to its exceptional beauty, is officially considered the most beloved in the world and the most widespread. 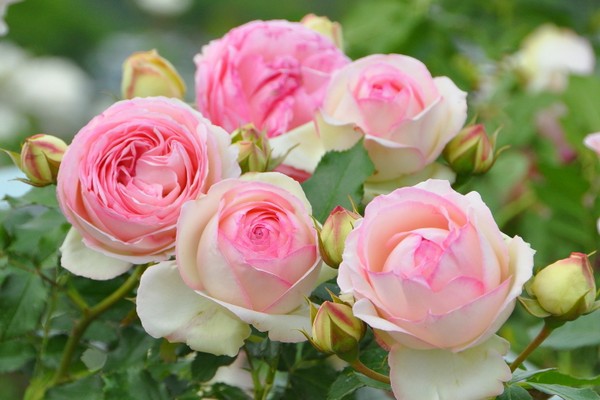 Mini rose Pierre de Ronsard does not grow quickly. Its height can be 3 meters. However, in order for it to grow properly, it needs some kind of framework. This can be an arch, wall, fence, or hedge. The tough, but rather fragile branches of this rose tend to sag from the severity of the flowers and their own weight.
Interestingly, the climbing roses of Pierre de Ronsard resemble roses on the trunk quite strongly.

The leaves of the bush are dark green, they feel rather tough, and they look very shiny. There are thorns, but there are not so many of them.
Thick and large buds, similar to a kind of cups, can be from 8 to 15 cm long. In one such bud you can count 70 petals and even more. The petals themselves are large and long, this is what gives the rose a kind of ancient charm. These roses can be of different shades: soft lavender, cream, ivory, pale pink. In color, the petals resemble Winfall cyclamen. Their edging color is much brighter and richer than in the very middle of the bud. The pink color at the edges starts from light to bright. It happens that on the outside, the color of the rose petals has a light green or pale green hue.

Regional affiliation also affects the shape of the buds of the shrub. If the climate is warm enough, then the rose blooms much more magnificently than in a cold area. There, the flowering may not be so plentiful, the buds may not open completely, but only half. They are twisted in the middle, looking like rosettes or small cups.

For reference, many people prefer this rose variety for its high frost resistance. Some choose it because it is remontant (the bush blooms twice in one season). But do not forget that the second time the Pierre de Ronsard variety does not bloom as luxuriantly as it does the first.

In order for this rose of paradise Pierre de Ronsard to begin to please with its external data, you need to be patient. It will take 3 years. From the moment of planting, only after such a period of time has passed, the shrub adds well in volume, becomes more luxuriant and branchy, looks like a royal majesty. 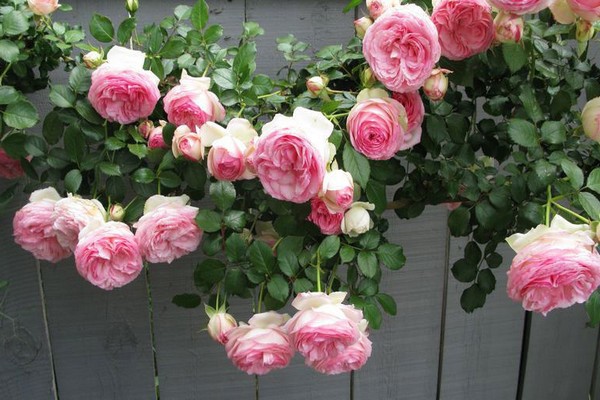 It is necessary to plant climbing roses of this variety in the spring, when frosts are no longer terrible and the earth is sufficiently warmed up. Of course, it all depends on the growing regions, everywhere the warm season comes in different ways.

It is worth choosing a bright place for planting a rose, with good air circulation, only without drafts. It grows best on loamy and sandy loam, rather loose soil.

Immediately, before planting a rose, you need to dig up the soil well, get rid of litter. Then you need to dig a hole and add about half a bucket of humus to it.You can also fertilize the soil with a potash mixture, just do not forget to sprinkle with another layer of fertilizer (and humus too), because the root system can get a serious burn. It is also important to moisturize the fossa before planting. After planting a rose seedling Pierre de Ronsard, it immediately needs to be watered enough.

To avoid blurring the roots, do not over-water it. In order for the bush to take root well and quickly, moisten it with water every morning, pouring it under the very roots.

It is best that the aboveground part of the Pierre de Ronsard mini rose seedling is about 20-22 cm.If it is higher, then you need to shorten it by doing this immediately after planting.

Climbing rose variety Pierre de Ronsard must be tied up. But this procedure should be done only after its buds have reached a size of 3-5 cm. In any other case, the flowering of the Pierre de Ronsard rose may not occur. For this rose, the natural position is a horizontal position. It is with such growth on a horizontal support or in a spiral that rose flowers will grow much better and more magnificently. With vertical growth, such a rose needs constant care in terms of tying the branches, which complicates the gardener's work a little. And you will also need to apply a little trick - bend the top of the bush with the help of a garter or some kind of load. It should be located lower than the main branch of the plant. With this method, it will be possible to achieve the most intense rose growth.

With the onset of winter, the rose of paradise Pierre de Ronsard requires shelter. Before this, the bushes are first tied up with natural materials (you can use unnecessary clothes, rags, dry leaves or spruce branches), after which they are covered with special covering agents (lutrasil, or spandbond, geotextile).

Many gardeners recommend covering this variety vertically so as not to break or damage its rigid branches.

If the climate in the region where the rose is planted is rather harsh, with cold winters, then for the winter period you can cover the bushes with plywood, making it look like a house. This method, together with covering materials, will allow the plant to winter better and more calmly. 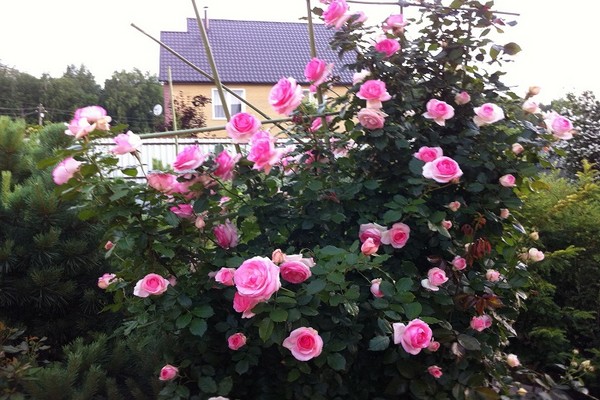 If the climbing rose Pierre de Ronsard is compared with other varieties, then it has the following advantages: this variety, unlike many others, is not so vulnerable to various diseases. It can withstand many pests and diseases. From the very beginning of flowering, the Pierre de Ronsard rose bush is always covered with flowers. This is due to the fact that when the first buds wilted, the next ones immediately begin to appear, creating a 2nd wave of flowering. Therefore, until the first frost, the Pierre de Ronsard rose blooms continuously. Another undoubted advantage is the resistance of the shrub to poor environmental conditions. The most important indicator of a plant is its frost resistance. This plant can survive a cold snap down to -30 C, calmly withstand cold winds and heavy torrential rains. Also, this rose has a very beautiful appearance. It can be used to create a magnificent hedge on the site. Such a hedge is suitable for privacy or dividing the site into zones.

Do not forget that if you do not take care of the support for several years in a row, it becomes dangerous for the rose, accumulates various infections in itself. To avoid such a danger, with the onset of spring, the structure must be cleaned and processed. It must be sanded, then apply paint or solution (anti-corrosion or water-repellent).

The mini rose of paradise Pierre de Ronsard also has its disadvantages. For example, her smell is not very substitutes, it is almost nonexistent. Therefore, flower lovers prefer to plant this variety in close proximity to jasmine, as the combination of their aromas is excellent. Still, these plants should acquire or make a sufficiently strong frame.To build it, you need certain materials, which accordingly leads to certain financial costs. The most optimal material is plastic. But the tree should not be used, because it will quickly dry out and crack. Likewise, metal supports are not suitable for roses, due to the fact that in the heat they can become very hot and burn, and cool down at night, creating a strong temperature contrast.

If the nets or trellises have too small holes, then it will be quite difficult to untangle the bushes in autumn.

Warm weather in winter rose you can not cover with anything. And in cold regions it is better to make removable shelters so that the support can also fit in them, but only with a horizontal location. 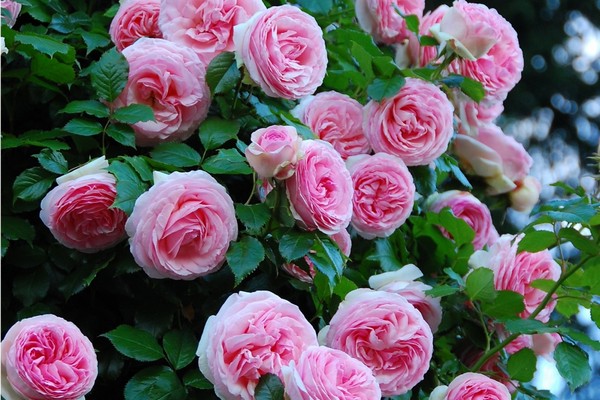 And when buying a rose, you should be very careful, because some sellers can sell bushes with a completely different description. For example, a rose similar to Pierre de Ronsard - Grandiflora. 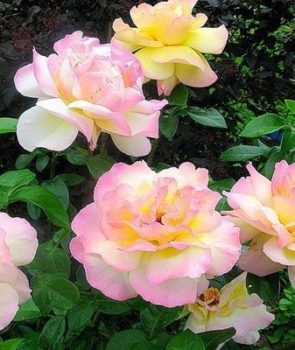 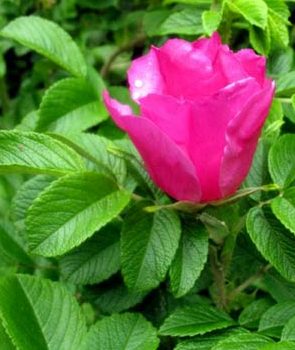 Rose wrinkled
Characteristics of the wrinkled rose This type of rose is a representative of the family ... 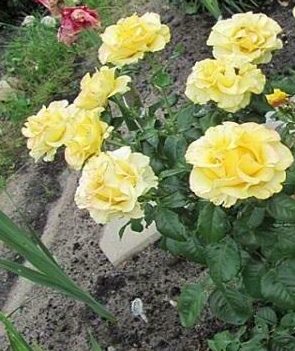 Rose Kerio
Rose variety Kerio kerio is one of the most popular hybrid tea varieties that is grown ...
×