Trellis for blackberries: how to tie correctly
5 911

Trellis for blackberries: how to tie correctly

In order to get a good harvest, you must follow all agrotechnical rules when growing blackberries. The tapestry is a construction necessary for them, with the help of which the correct formation of the plant takes place. Young shoots will develop better while on the trellis. Today, it is possible to install modern rotary structures, making it possible to leave whips on them, laying them under a winter shelter. In this article, we will show you how to use a blackberry trellis

What is a blackberry trellis for? 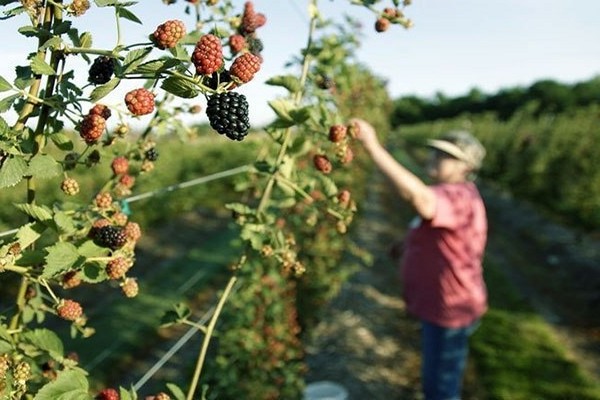 It should be said, before considering various types of supports, that growing blackberries on a trellis, you can get quite a few advantages:

Tapestries are no less important for the person himself:

What is a trellis for a blackberry 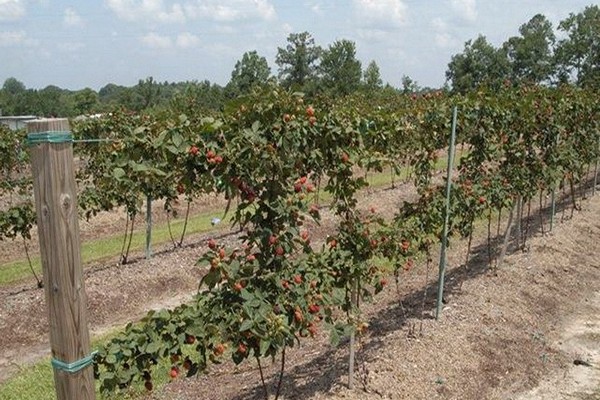 When making a trellis for a blackberry with your own hands, you do not need to spend much energy on drawing them for a blackberry trellis. There are two types of supports and their designs are very simple:

Each of these models has its own pros and cons.

The single-strip model is considered the simplest design. To create it, it is enough to dig in the pillars and pull the wire between them. The tapestry is made to the height of human growth. The support can be not only in an upright position, it can be tilted, the plant can be placed on it in the form of a fan, freely or in a horizontal position. What will be the position depends on where the plant grows, because it can act not only as a bush that brings crops, but also as a decoration for the site.

The single-strip model has only such a drawback as the fact that each lash must be tied separately. If the trellis is small in a summer cottage, then it will not be difficult, but on large plantations, this becomes a problem. 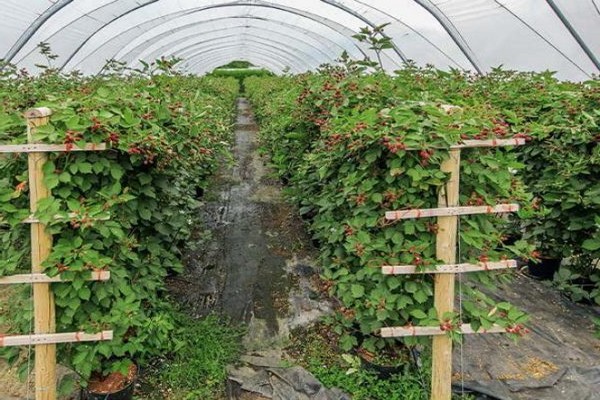 A two-lane model of a trellis for a blackberry is also made of pillars and wire, only it has the wire in two rows.Thanks to the trellis, the lashing of the lashes is greatly simplified, it becomes easier to form a plant, the bushes do not thicken. This model is most in demand among farmers engaged in growing on large plantations. The design of trellises is of three types: T, V and Y.

If you plan to build a trellis for blackberries in a T-shaped form, then you will need to install two pillars, placing them vertically, and tie elements horizontally located and at the same distance to them. Further, a wire must be fixed to their edges, which forms two lines on one support row, to which the whips will be tied. There are no special rules or secrets regarding the correct garter for such a trellis. The shoots are simply straightened and laid out on opposite sides on the wire, leaving an empty space in the center.

If you plan to install the trellis in a V-shape, you will need to install paired supports at an angle. For one element, two pillars are needed, they must be connected at the ground, and expanded to the top. Blackberries on such a trellis are tied in the same way as in the case of a support in the form of T.

As in the previous version, the same materials are used to install the trellis in the Y-shape, and the procedure is carried out in the same way, only two pillars should expand not from the base itself, but from the middle of the central support. To make such a trellis, you will need to use pivot hinges. This design is ideal for those who want to make their garter beautiful. By placing the branches on such a trellis, you can give the bush the shape of a vase, because from below and to the center, all the branches will be gathered together, and then diverge on different sides.

For the manufacture of supports on their own, wooden poles, metal pipes and profiles are used.

How to make a blackberry trellis with your own hands? 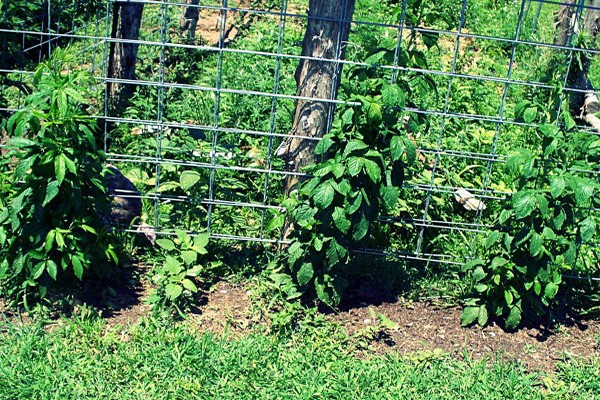 If you want to buy a trellis, then you can do it, they are sold in any garden centers. But is it worth spending a lot of money on this if the structure is assembled quite simply and with your own hands? You can make a different shape of the structure, but a single-strip trellis is quite suitable for a garden plot.

The pillars are the basis for the entire structure. The length of wooden poles or metal pipes should be 2.5 meters. Wire will be the most suitable material for tensioning the line, but if this is not possible, then you can make the tension from the twine.

Algorithm of actions, how to make a trellis for a blackberry:

If the trellis for blackberries begin to tilt while pulling the wire or under the weight of a bush, then mistakes were made during installation.

Blackberry garter on a trellis

In order to understand how to correctly make a garter of prickly blackberries, you need to understand the planting scheme, which takes into account all the features of the variety, the climate in which it is grown and how nutritious the soil is. It must be remembered that the better the conditions for the plant are created, the larger the size of the trellis for the blackberry will be.

As a rule, the formation of blackberries on a trellis is done in the form of a fan. This scheme is ideal if the variety has limited shoot growth. Planting bushes should be carried out at a distance of 2 meters or 2.5 meters from each other in a row and between rows. Shrub varieties are planted at a distance of 1 to 1.5 meters.

Garter methods, of which there are three, are selected depending on which variety is purchased. The procedure is carried out in early spring.

After the harvest is all harvested, the autumn pruning of the blackberry growing on the sleeper is carried out, during which all the shoots that have any damage, signs of disease and those that bore fruit in the current year are cut off. Only young shoots remain.

Gardeners with extensive experience in growing blackberries also prune in early spring. With it, you can shape the plant and remove all shoots that were injured during the winter cold. 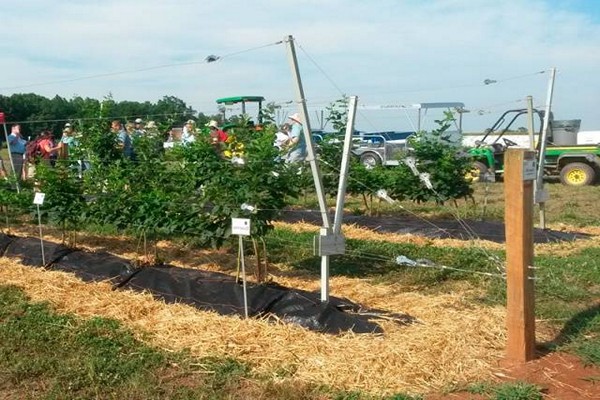 American scientists have developed a swivel trellis specially designed for growing blackberry bushes, which greatly simplifies the preparation of plants for winter in the northern regions. This technology is actively used by large producers of berries around the world. Scientists have been able to prove that this structure is unique in its plant formation system, due to which the yields become consistently large.

This technology was created so that you can easily bend and cover the plant for the winter. The fact is that at a temperature of -23 degrees freezing of fruit buds occurs, and if varieties of the creeping type can be easily laid and covered with straw, then it is extremely difficult to do this with erect bushes. When trying to bend straight and very powerful stems, they often break, not to mention the fact that even bending them is very difficult. With the help of a swivel trellis, you can carry out this procedure simply by moving the device to the winter position without removing the shoots from it. 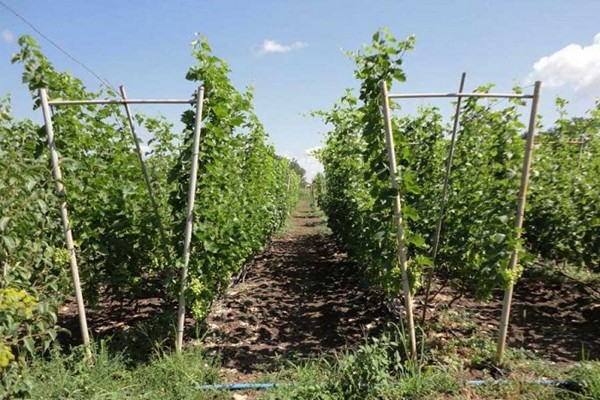 In summer cottages, such a novelty as a swivel trellis is not popular. But when growing your favorite variety, you can try to build it yourself. The support itself is Y-shaped. The secret of this design is the hinged fixation of the upper fork with the main strut. From the edge along the row, on both sides, they are installed along a single pillar, to which the braces are attached, holding the support.

Rotary trellis for blackberries have many advantages:

The main pillar, short and long arm, a hinge in the form of a metal plate, which is fixed with bolts, are the components of the pivot structure.

It can be in three positions:

It will be much easier to grow blackberries if you use a trellis for this. Thanks to their installation, yields will be much better than without them.

Garter blackberries on a trellis: video, how to tie with your own hands

Growing pineapple: TOP tips for growing at home with a photo 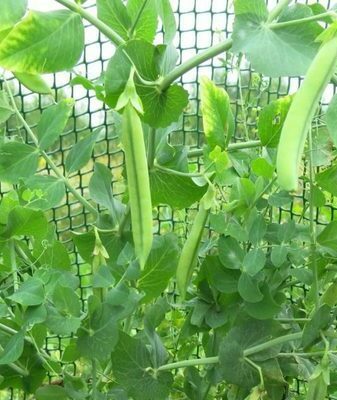 5 best designs for peas supports: making trellises and props with your own hands
The support for the peas is very important. Because growing peas without strengthening their stems can ... 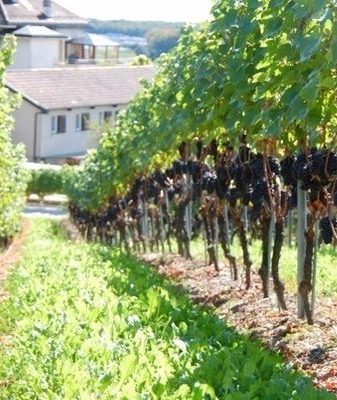 Diy grape trellis - instructions for making
Grapes are considered a fairly popular horticultural crop and are grown throughout the territory ... 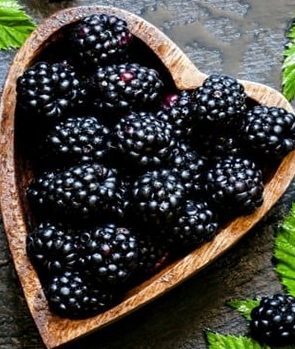 The best varieties of blackberries
Blackberries first appeared on the American continent. As soon as she was in Europe she had to ...
×