Neighborhood garden plants: which plants should not be planted nearby?
166

Neighborhood garden plants: which plants should not be planted nearby? 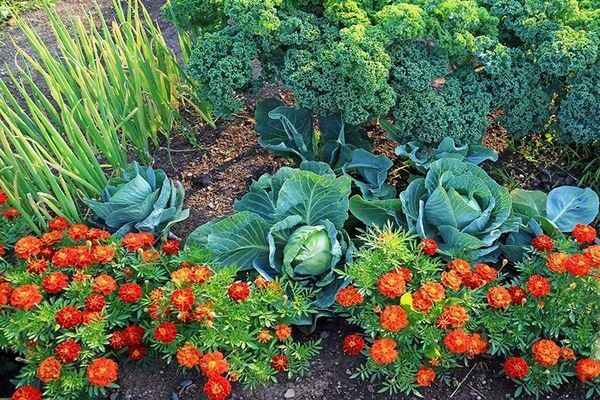 The correct selection of neighboring cultures on the site will ensure their long and prosperous coexistence. In this article we will tell you how to organize not only a safe, but also mutually beneficial neighborhood of garden plants.

Having decided to plant a fruit and berry tree or shrub on your site, you should, first of all, find out everything that concerns its ability to get along with other inhabitants of the garden. In neighboring crops, common diseases or pests can be found, or complete incompatibility. Some of them are capable of poisoning the soil with toxic substances released from the roots or fallen leaves, and thereby harm and even kill other plants. The tightly intertwined roots of neighboring systems can also be a source of problems. How to avoid all these difficulties - will be discussed below. 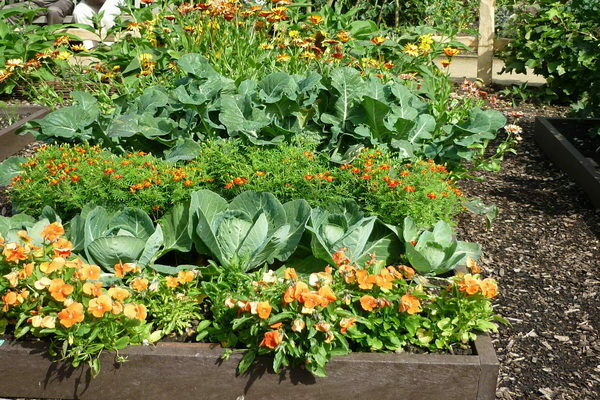 Obviously, you should avoid the neighborhood of garden plants that are susceptible to the same diseases and the effects of a certain variety of pests. If the area of ​​the site allows, then incompatible crops can be planted at a distance of at least 4 meters, which to some extent will reduce the risk of spreading infections or harmful parasites. However, this method does not give a 100% guarantee of preventing mass destruction of garden dwellers. In addition, not every gardener has a vast territory to isolate problem plants as much as possible. Therefore, the best way to avoid an unfortunate neighborhood is to refuse to plant incompatible crops in a small area.

Another kind of incompatibility is expressed in the suppression of some cultures by others. Thus, plants that release substances into the soil that poison their neighbors are trying to displace other crops and take their place. Even after removing the source of toxic compounds from the site, the soil remains poisoned and dangerous to other plants. In this case, we are talking about allelopathy, which illustrates the process of plants fighting for their habitat. At the same time, chemical compounds secreted by the roots of some cultures can be destructive for some and harmless and even useful for other neighbors.

Among the diseases and pests that threaten the plant world, there are picky varieties that can destroy almost any crop, regardless of their species. So, the most dangerous enemy of deciduous plants is a pest that spreads tubercular and cytosporous necrosis.

The diseases with a narrower "specialization" include rust caused by fungi. The very process of the introduction of the fungus and its development is quite lengthy and is subdivided into three periods (spring, summer and autumn). Moreover, during each of them, it is possible for its spores, which ripen on various plants, to spread through the air.

It is important that the absence of one of the traditional carriers of these spores at the site, regardless of their stage of development, interrupts the chain of spread of the disease.For example, one of the intermediate hosts of the fungus is barberry - spores that infect grain crops ripen on it. Therefore, if you do not plant barberry bushes near grain crops, then you can avoid the appearance of rust.

Plants incompatible with the apple tree

Since the beginning of the last century, it has been known that the proximity of rowan and apple trees can lead to the death of the apple harvest. This is exactly what happened in North America, when a large percentage of the harvested fruits were infected by the worm over the course of several years. The reason for this was the caterpillars of the mountain ash moth, which penetrated the apple plantings from neighboring areas filled with mountain ash. The failure of the early XX century made it possible to find out about the incompatibility of the apple tree and mountain ash.

Another source of pests dangerous for the apple tree (we are talking about aphids) is viburnum. This culture has another unpleasant property - it takes water from the soil, creating a deficit, which can lead to the drying up of the apple tree. Other sources of harmful parasites that are detrimental to apple trees are bushes of lilac, juniper and hawthorn, as well as thickets of bitter wormwood.

Neighborhood with conifers will also have to be abandoned: their roots release a large amount of resin into the soil, and also acidify it, making it unsuitable for growing apple trees for several years.

The ability to suppress the apple tree is possessed by other fruit and berry crops, such as peach, cherry, sweet cherry. The powerful root system of the latter simply displaces the roots of the apple tree into the lower layers of the soil, poor in moisture and nutrients, which leads to the death of the tree. Peaches and cherries also rob their neighbors of food, as well as oppress them with abundant root shoots.

A similar mechanism of suppressing the apple tree shows the potato: its planting greatly depletes the soil, taking away all the nutrients. Apple trees with a weak root system, planted next to potato beds, will suffer from hunger and may die.

You can avoid hitting an apple tree with a moth by planting tomatoes next to it, which are unbearable for this type of pest. Another neighbor that can protect the apple tree from this scourge is the ash-leaved maple, the leaves of which emit phytoncides that repel pests. To increase their concentration in the air, you can crush maple leaves daily.

Raspberries will become a very successful neighbor of the apple tree, providing it with protection from scab, as well as fixing the nitrogen contained in the soil with its root system. This neighborhood is mutually beneficial: in turn, the apple tree will protect the raspberry bushes from being damaged by gray rot.

In some cases, honeysuckle plantings can be placed around the apple orchard - but not mixed. The leafworm and goldfish dwelling on the bushes of honeysuckle can move to the apple tree.

In many ways, the same recommendations are suitable for a pear as for an apple tree. Neighborhoods with junipers, barberries and other stone fruits should be avoided due to susceptibility to the same diseases.

The strong root system of beech has an overwhelming effect on the pear. But the pear itself is far from harmless to its neighbors: its roots secrete poisonous compounds into the soil.

Most of all, oak, mountain ash and various types of poplar are suitable for the neighborhood of garden plants with a pear. Despite the developed root system, the oak will not oppress the pear, since its roots go to a great depth, leaving the upper layers of the soil for the neighbors. The ascetic nature of mountain ash also makes it a suitable neighbor for pear trees, and its fallen leaves and berries also act as a fertilizer for the soil. The poplar planted on the north side will protect the pear tree from frost.

For cherries, the proximity to the apricot is extremely dangerous: the poisons secreted by its roots will sooner or later destroy it.

Black currant is also undesirable as a neighbor of the cherry tree: the different growing season of these crops will complicate their processing, and in addition, the root system of currant bushes too actively absorbs moisture and nutrients, depriving the cherry of nutrition.

It is dangerous for cherries to coexist with the nightshade family, which spreads verticillary drying, leading to the death of the tree. Strawberries planted next to cherries can infect their neighbor with a nematode.

A favorable neighborhood for cherries will be formed with cherries and plums. Due to the coinciding growing season, these crops at the same time need watering, fertilization, and treatment from parasites. Their root systems and height are also about the same, so they do not overwhelm each other. In addition, some varieties of cherries can pollinate cherry trees.

Serious competition can arise between the plum and its neighbors such as raspberries, pears, black currants, and apple trees. These crops will constantly fight for territory and take away nutrients from each other. In addition, all these plants are susceptible to attack by the same pests and similar diseases.

A good neighbor for a plum will be a black elderberry bush, which protects it from aphid infestation. The Canadian maple also gets along well with the plum tree, provided it is pruned annually for height control.

It is better to plant apricot, which releases toxic substances, separately from other crops. But he himself can become a victim of poisoning if any kind of nut is placed next to him. Apricot is susceptible to the same diseases and pests as most other fruit and berry crops.

The peach is quite aggressively adjacent to the pear and apple tree: its root system will suppress and ultimately destroy the roots of its neighbors. In addition, these crops have common diseases and pests.

But cherries and cherries, shading a light-loving neighbor, can lead to the death of a peach tree.

Barberry is distinguished by its quarrelsome character and, due to its toxicity, is capable of lime almost any neighbor with the exception of hawthorn, irgi and American maple. Plum and honeysuckle will feel relatively safe next to it.

Of the varieties of currant bushes, black currant is the most flexible. The list of neighbors undesirable for her is limited to bird cherry and gooseberry, which are susceptible to similar diseases and pests.

Red currant as a neighbor will only tolerate rose hips, subject to constant control over its growth. And with other crops, it has common enemies among pests and common diseases.

Golden currant feels great next to any neighbors, but it has a detrimental effect on them.

Sea buckthorn is also a rather aggressive crop, whose shoots tend to take over the surrounding area and displace other plants from it. Only garden strawberries can compete with it, but this neighborhood is not without difficulties due to the presence of common diseases and pests.

The desire of gardeners to combine as many different plants as possible on their site is quite understandable, but not always feasible for the reasons set out in this article. Owners of small gardens should be careful when choosing crops neighboring on the same territory. 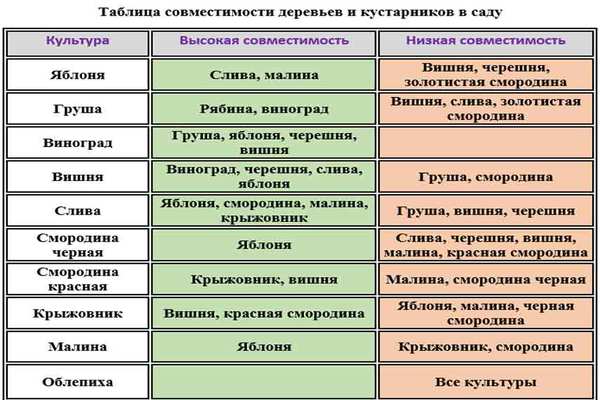