It is not for nothing that the rose is considered the queen of flowers. Roses amaze not only with their beauty, but also with their variety. These flowers differ in appearance, height, flowering period, and growing characteristics. Currently, there are nine types of roses. 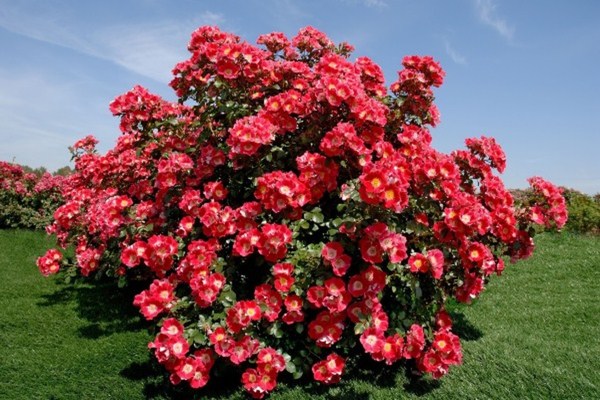 When talking about park roses, they usually mean antique roses and decorative rose hips. Park roses can often be seen on city streets, squares, parks. They look great both singly and in groups. The bush of park roses is tall and powerful, it can grow up to two meters in height, their leaves are leathery and large. These flowers are very unpretentious, they tolerate frost well, do not freeze, very rarely get sick, and are easy to care for. Gardeners fell in love with this type of roses precisely for their undemanding care.

Park roses bloom early, they bloom in late spring or early summer, which is much earlier than the flowering of other roses. They have a fairly abundant flowering, which ends quickly. It happens once a year. Flowers are ten centimeters in diameter, they emit an indescribable smell. Their color is very diverse, you can find white, yellow, purple, scarlet roses. 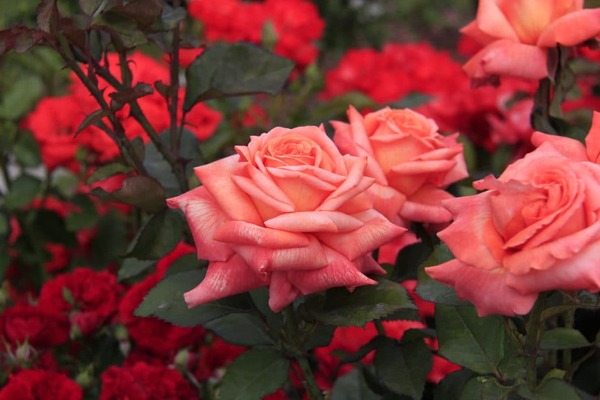 Hybrid tea roses come from tea roses. These beautiful flowers were obtained by crossing tea roses with remontant roses. In terms of their qualities, these roses are superior to many well-known varieties. Hybrid tea roses bloom in the second half of June and continue until autumn, until frost sets in. The flowers of hybrid tea roses are large, double, located singly or in small inflorescences. Hybrid tea roses have a rich color palette. The height of the bush is from 0.6 to 1.5 m.

Hybrid tea roses are extremely capricious, they love warmth, are selective to the place of planting, often get sick and are attacked by pests, so they need proper care. If you do not neglect it, roses will delight you with their beautiful, fragrant flowers for a long time. 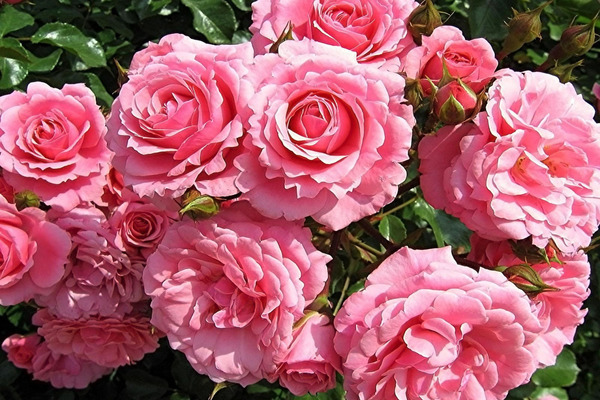 Remontant roses have a feature that distinguishes them from other species - they bloom again. They bloom first in the second half of June, re-flowering occurs in late July or early August. The second bloom is not as exuberant as the first. These roses were bred in the 19th century in France. Their creator is the breeder Laffay. The flowers of remontant roses are large, up to 8-16 cm in diameter, can have different colors, but the most common are pink, scarlet, yellow, snow-white roses. Varieties with dark red flowers are prone to sun fading. The smell depends on the variety, it can be strong and rich, but it can also be mild. The bush grows up to 2 m in height.

Repaired roses are considered winter-hardy, but they still need to be covered for the winter. A huge disadvantage of remontant roses is their poor health. They are prone to fungal diseases, very often they are affected by powdery mildew. 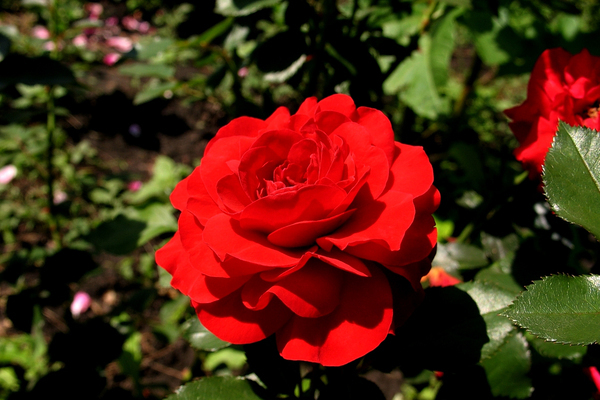 The name floribunda is translated from Latin as "profusely flowering rose". Floribunda roses are also a hybrid. They managed to get them by crossing hybrid tea roses with polyanthus. The breeder Svend Poulsen gave the world these wonderful flowers. Floribunda roses have taken the very best from their "parents". They received a variety of shades from hybrid tea roses, and excellent immunity from polyanthus roses.

This species is distinguished by incredibly abundant and long flowering. Any variety of floribunda roses can strike with flowers that simply cover the bush.They begin to bloom in July and continue to bloom until late autumn, delighting the eye with their incredibly beautiful inflorescences. To replace the faded buds, new ones immediately begin to bloom, and flowering continues. Many have noticed the similarity between the flowering of floribunda and hybrid tea roses. Of course there are some similarities, but there is a significant difference between them. Hybrid tea roses bloom in waves, and floribunda roses bloom without stopping.

Floribunda rose flowers are quite large, they can be collected either double or ordinary. These roses look very sophisticated and impressive. Their bush cannot boast of large size, it grows up to 0.3-1 m high. Floribunda roses tolerate winter perfectly and rarely get sick. 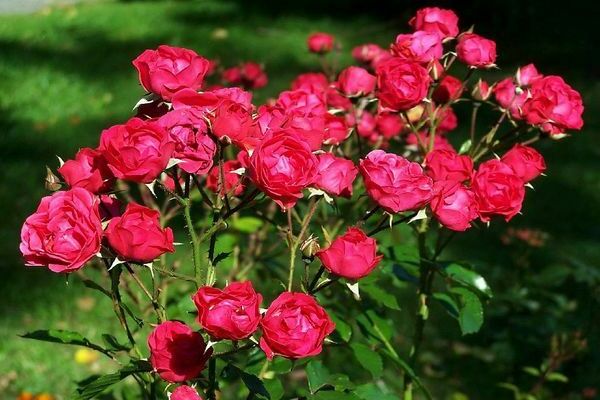 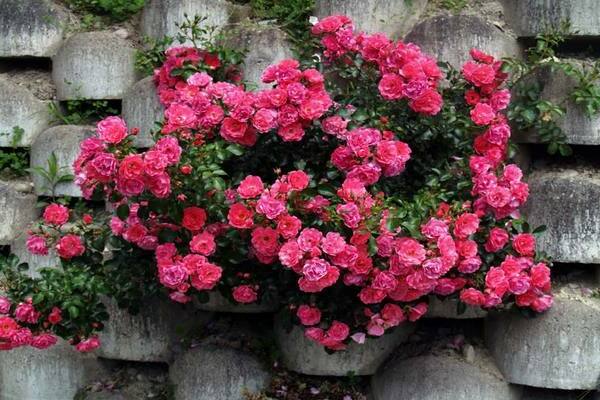 Miniature roses grow to a height of only about 0.4 m. They have small, compact bushes with dense foliage and small double flowers, which can be very different, ranging from the usual scarlet or white to an unusual slightly greenish color. There are even varieties in which the bud, from the moment of flowering and before wilting, has time to change color.

Very often, miniature roses are grown at home as indoor plants, then they continuously delight with their magnificent flowering. On the street, their flowering continues until late autumn. Many take pots and containers with miniature roses outside for the summer, and bring them back into the house in the fall.

These flowers look great on alpine slides, there is nothing better to find them for decorating and landscaping balconies. Often they are used to make wedding boutonnieres and decorate their hairstyles. 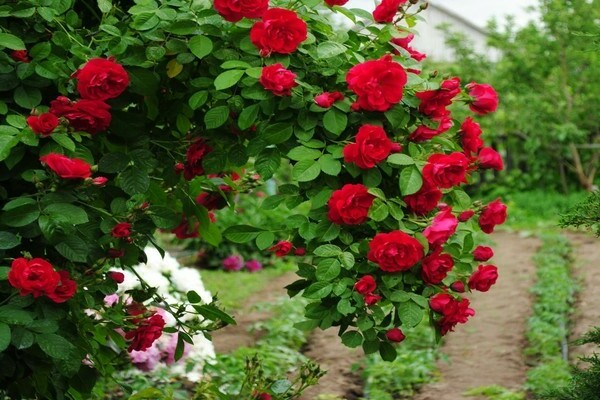 Climbing roses are most often used for vertical gardening, they are planted near gazebos, arches, pergolas. These beautiful plants can decorate any structure and structure. They have long, creeping stems that need support and small flowers, only 2-5 cm in diameter, collected in inflorescences.

Climbing roses are divided into two groups by flower growers: small-flowered and large-flowered. Small-flowered roses, in accordance with their name, have smaller flowers. They have a very long, creeping stem that can grow up to five meters in length. Inflorescences are located from the base to the very ends of the stems. Small-flowered climbing roses have small green leathery leaves. They bloom once a year, the flowers are odorless. Large-flowered roses have larger flowers that resemble in their shape those of hybrid tea roses. They can bloom again during the summer. 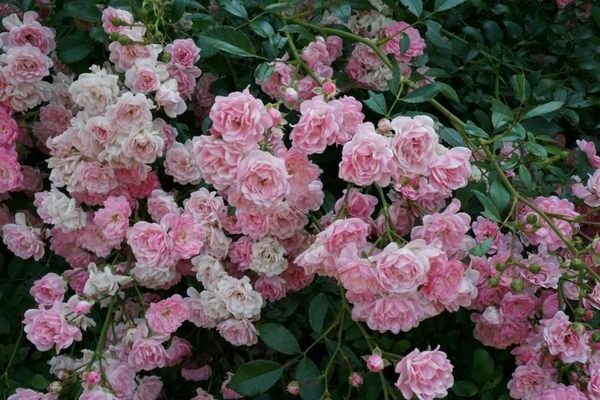 Groundcover roses are creeping shrubs that have long, slender shoots that are close to the ground. The flowers of ground cover roses can be of different shapes and colors. The flowering of these plants is very long.They require some special care. Groundcover is known for its resistance to fungal diseases. They are often planted to decorate the slopes. 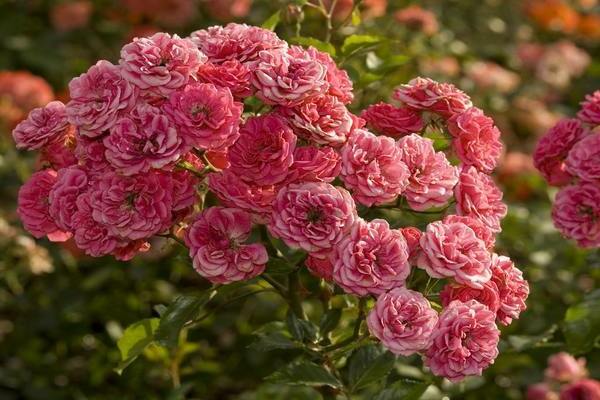 Shrub roses are plants that have a large bush with many branches. Shrub roses bloom incredibly profusely and for a long time, but, unfortunately, only once. These roses are known for their vitality and can grow even in poor conditions. The most famous representatives of this group are Austin English roses, which have beautiful double flowers and a pleasant smell.

Quince fruits. Find out when and how to harvest quince. Storage of quince.

Astilba and tips for growing a garden beauty!