The Alice cherry variety is very famous for its versatility. If you carefully and correctly plant cherries, as well as take care of them, then the shortcomings will not interfere with the development of the tree well. At the same time, the tree will bear fruit well, and bring a high-quality, tasty harvest.

Felt cherry Alice: the history of the creation of the variety

The variety was created by the breeder Tsarenko, experiments were carried out in the Far East. The breeders decided to cross several varieties, resulting in a new variety, which was named Alice. 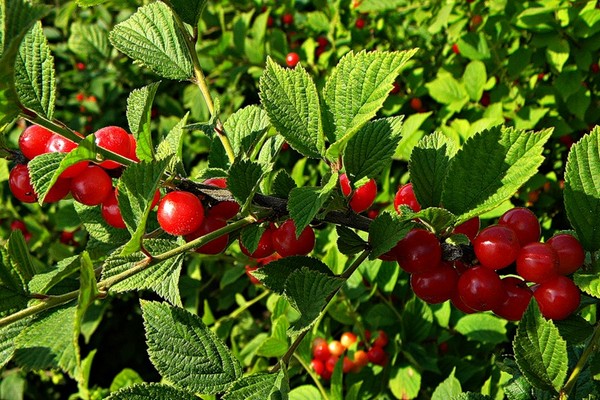 Cherry Alice grows no more than 140-160 centimeters in a high-rise, the cherry bush turns out to be very dense, with practically no free space. The bush is oval in shape and grows at an average rate. The branches are usually brown-gray in color, they are covered with small tubercles, which are otherwise called lenticels. The branches themselves are strong, wide, and they also develop smoothly. The shoot is quite long and is colored in an even brown-beige color; there is a small downy on the shoots.

The bush has buds, but they are small in size, have a slight fluffiness and resemble the shape of a carrot, since they have a sharp end. Alice's foliage is very rich green, the leaf looks like an elongated oval with a sharp side. The leaves have irregularities and denticles along the edge of the leaf plate, there is a little fluff.

Cherry stalks are also fluffy and short, up to 50 millimeters, have an average width.

The cherry blossom has an average size, usually it does not exceed 25 millimeters, the shade can be white, or it can be pink, it resembles a ball in shape.

The fruits of this variety are very large, therefore it belongs to large-fruited varieties, each berry can weigh about 4 grams, inside the berry there is a bone, which, even when Alice's cherry is ripe, is poorly separated from the berry. The fruit looks like an elongated circle with a sharp end. The skin is very thin and practically does not protect the pulp from injury, it is a burgundy hue. The fruit inside is very juicy, pinkish-red in color. With good care, cherries can bear fruit without interruption for about 20 years.

Initially, this variety was created for cultivation from the area where it was created. But over time, it began to gain in popularity and spread to other areas. After it took root in different territories, it began to be actively cultivated on a permanent basis.

The peculiarities of the plant will help to choose the right place for planting, as well as the necessary care.

The Alice variety is highly resistant to frost and generally to changes in temperature in the environment, so the whole bush, shoots, buds will feel great in spring and winter frosts, so there is no need to worry about this. 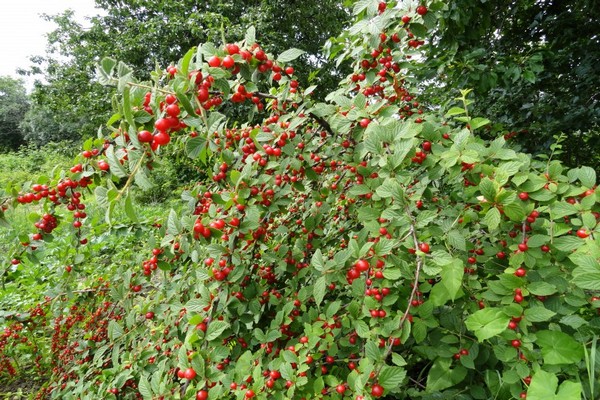 The flowering period of this variety can be observed during the May period.Alice is considered a medium-early ripening variety, so Alice's already ripe cherries can be harvested in the second half of July, 15-18.

Since the variety is felted, the plant has early maturity, which is very important. If you plant a seedling that is at least 3 years old, then in the second year after planting, the bush will already yield a crop.

Since the variety is self-fertile, it is necessary to plant trees or pollinator plants next to it. Without them, the plant will not be able to produce crops. And only thanks to pollinators, flowers in the future in the fruit. Usually several pollinator trees are planted to fully fertilize the entire shrub. Other varieties of cherry can act as such pollinators.

Note: The Alice variety is extremely poorly tolerated by excess moisture, so watering should be moderate and carried out carefully and carefully.

Other varieties of cherries can be substituted for peaches, almonds, plums, apricots, and so on.

Alice belongs to the varieties with a high yield, since one bush can bear from 5 to 9 kilograms of fruit. The berries are very tasty and have a pleasant aroma. According to experts, this variety is rated at 9 points out of 10.

Note: Berries are poorly transported and carry transportation, so even if you pick unripe berries, they will still not retain their taste and appearance due to the thin shell. 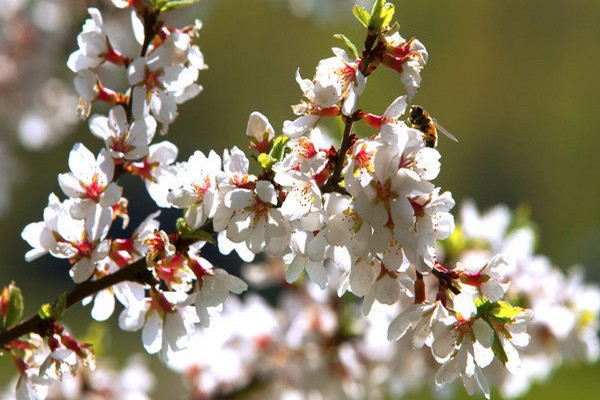 Berries of this variety are considered universal in consumption, therefore they can be used everywhere.

Most often, juices, wines and other drinks are prepared from them; sweets, such as marshmallows, can be prepared. You can boil them and make jam, preserves, or use them immediately after harvesting without cooking them.

What diseases is the variety resistant to?

The Alisa variety is highly resistant to many diseases. To such as coccomycosis, clasterosporiosis. The only disease that can really affect a plant is

it is moniliosis. It begins to arise due to excess moisture in the soil and in the air, and we know that the plant treats this very badly. If you do not start treatment on time, the plant will die.

Note: Felt cherries and common cherries are two different types. They are similar in appearance to each other, but they are very different at the genetic level, so they will be able to pollinate each other. 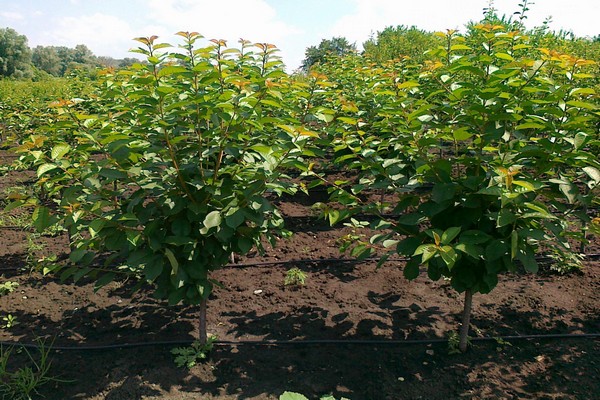 When to plant the Alice cherry variety?

In order for the plant to develop better, you must follow some rules for planting cherries. It is they who will help grow a healthy and strong plant that will bring a big harvest.

Cherries are planted either in the spring or in the fall, depending on the climate and temperature. A prepared seedling is planted in open ground. If this happens in spring, then in mid-April, during this period, the plant will take root well in the soil, and it will have time to harden.

If planting is carried out in the fall, then at the beginning of September. Autumn planting should be done 30-40 days before frost starts.

For good development, you need to choose the right landing site.It should be well lit by the sun, as the black cherry variety Alice loves warmth and light. Also, the soil should be light and well-loosened so that oxygen can calmly penetrate the root system. The acidity of the soil must be stabilized if problems are present. If the acidity is increased, then a small amount of lime can be added to the soil.

In no case should you plant in heavy soil, as well as in an area where there is groundwater or a swamp nearby.

What should not be planted near cherries?

Some crops a priori cannot be grown next to cherries, but they will compete and interfere with each other's development.

First, let's figure out which plants will get along well with cherries nearby. Such plants are other varieties of cherries, you can also plant greenery. For example, parsley, onion or garlic, as well as some flowers: violets and others.

Elderberry can be called a good neighbor, as it will protect cherries from aphids, grapes, they just get along well with each other.

Various flowers, such as begonia, rose, phlox, which like a lot of water, should not grow near Alice, as excess moisture will reflect badly on her. Raspberries or gooseberries will be bad neighbors, as they will begin to take away all the useful trace elements from the cherry, while preventing it from developing and growing. Tomatoes and peppers are sources of disease that can infect cherries despite their persistence. Some plants, for example, nuts, will begin to oppress the cherry, so it will stop growing, developing and its yield will decrease by 2 times. Plants with needles will begin to acidify the soil with their presence, and cherries will not like such soil, since they like neutral soil.

The seedling must be purchased in specialty shops dedicated to the garden and garden or in nurseries that breed many plants. It is very risky to buy seedlings from the market, as it can be of a different variety or be infested, and this can harm your entire garden.

If you have chosen a nursery, then you need to choose healthy seedlings, the height of which should be about 28-35 centimeters, the root system should be extensive and developed, and the buds should be available.

Note: The seedlings must be completely healthy and free of any damage. If there are any wounds, then the landing should not be carried out.

Preparation is very simple and consists of soaking and pruning. The pruning is done neatly, and very few roots are cut off. Then they are dipped in water mixed with a growth stimulant. The chemical stimulant can be replaced with wood ash. 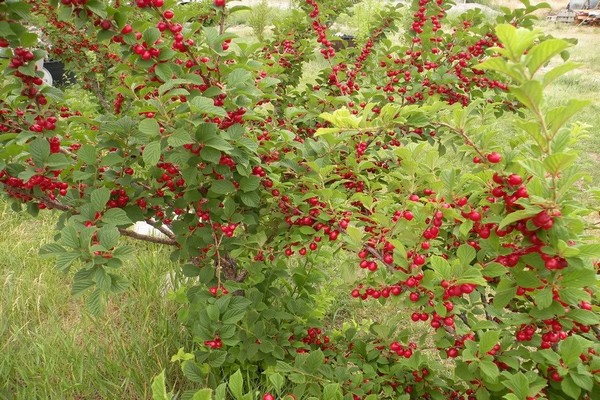 Landing should be carried out according to the instructions:

Further care work is basic and does not require much effort. They consist in pruning, watering, loosening and protection from various animals that can damage the plant.

Watering should be done moderately and carefully so as not to flood the plant.Watering depends mainly on weather conditions. If the soil starts to dry out a little, then watering is necessarily carried out.

Fertilizers must be applied very carefully, only around the trunk and only when the cherry has faded. For one tree, you need to take 2 kilograms of organic fertilizers, 30 grams of superphosphate, 15 grams of nitrogen and 8 grams of potassium. All these fertilizers should be applied under the tree.

To protect against various rodents, it is necessary to tie the trunk using material. In the form of reeds, spruce branches, shoots of various plants.

Note: As soon as the frost is gone, the material must be removed.

Preparation for wintering will be very simple, you need to properly pack the snow around the trunk and that's it.

How to deal with diseases?

Breeders have not yet created such a cherry variety, the immune system, which will cope with absolutely any disease and pest, so the black cherry Alice can get sick and become infected with some kind of virus. There are 3 main diseases that can attack and infect a plant.

Cherry Alice: how to propagate?

Reproduction of this variety can occur in several ways:

At the same time, cuttings are the most effective and common method, since it is easy and quick to do, therefore it is suitable even for a novice gardener who has no experience at all.

Note: Using bones, you can also try to reproduce, but I want to take into account that this is a very long and difficult process that only an experienced gardener can handle.

I would like to say that the Alice variety, despite its small flaws, is an excellent variety that every gardener should get to know. After all, the felt cherry Alice has a unique taste and aroma of ripe fruits. 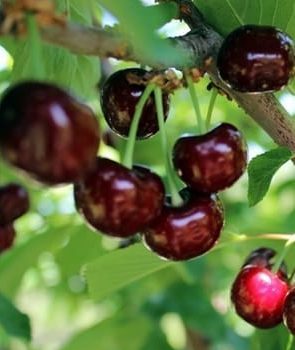 Miracle cherry: variety description, pollinators, winter hardiness, photo
Cherry is an integral tree of any garden plot. There is a wide variety of varieties of this ... 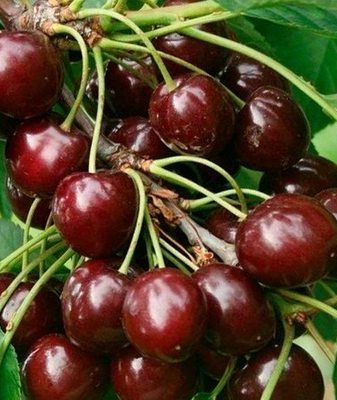 Bush cherry
Shrub cherry is one of the favorite plants of countless gardeners. She possesses ...