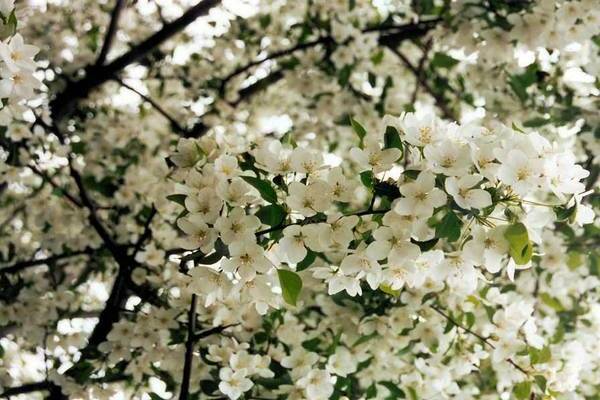 Photo of a variety of decorative apple "Malus Pallasiana"

The tree is not tall, at the top of its crown it does not often grow above a meter. Ornamental fruiting trees can be shrub figures. If the crown is not trimmed, then its shape will resemble an irregular circle or oval.

Some varieties of ornamental apple trees yield a harvest, but the harvest is usually not edible, or rather, apples are not tasty.

The color of the bark of the trunk can vary from a delicate grayish color to a bright brownish color. The shape and color of the foliage requires special attention when choosing a variety of decorative apple trees. Some of the varieties have a reddish color and a long period of non-falling foliage in the autumn season. This allows you to create a stunning landscape even with a poor soil composition, as well as inclement weather.

Usually, an ornamental apple tree has dense foliage of a bright greenish color, which changes from yellow to red. But this happens only at the end of the summer season or at the beginning of autumn.

Most often, the length of the leaf reaches ten centimeters, the shape resembles a plum or an ellipse.

In the process of flowering, the entire crown thickens with deliciously smelling inflorescences, which can grow up to four centimeters wide. Most often, the color is snow-white with various shades of pinkish, beige, peach and others. Single inflorescences are collected in bouquets on a stem.

Crop formation begins immediately after the flowering process. In the middle of all inflorescences, a receptacle is placed, which over time increases and fills with pulp. Outside, the apple is initially green, then, in the process of ripening, changes to yellowish and reddish.

These apple trees have an amazing level of resistance to negative factors of the surrounding world. They are resistant to cold weather, and grow well in the climate of the northern regions of Russia. 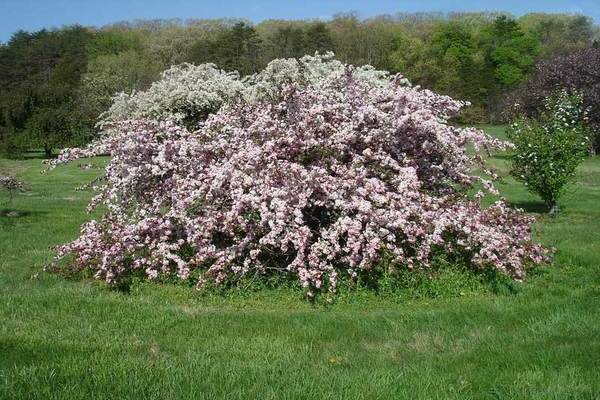 Photo of a variety of decorative apple "Malus sargenti"

Perfectly ornamental apple trees to plant in the spring season, before the first buds bloom. Or in the fall season, in September or in the first weeks of October. If the seedling is younger than four years old, it is possible to plant it both in the spring season and in the autumn season. But the old ones take root badly during transplantation - they are exclusively in the autumn season.

Special attention needs to be paid to space. For ornamental apple trees, a lot of free space is required. They should not grow very close to other large trees.

For all apple trees, you cannot touch the space on which their crown will be located at a more mature age: the width of an apple tree of a certain variety should be the main criterion. The basic option is a space of approximately five to six meters.

For a decorative apple tree, it is necessary to make a large planting hole in advance. It is recommended to do this in the autumn season of last year or thirty days immediately before disembarkation. The planting hole is approximately eighty centimeters wide and approximately one meter deep.This is the best option.

The soil removed from the planting holes must be changed to a special substrate. A double dose of sand and a triple dose of humus are added to leafy soil. If possible, two hundred fifty-three hundred grams of whole mineral fertilizing are added to the soil.

Without such fertilization, the trees will adapt for a long time and it will take a lot of time to grow to the required size. The planting depth is the same for all fruit-bearing trees: the root collar should be five to ten centimeters above the soil level. 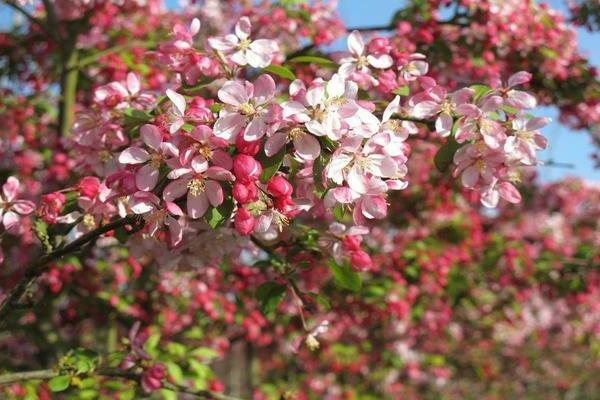 Apple trees need fertile, well-drained soil. The planting site should be in the sun. Strongly shaded areas are not suitable for these trees.

Watering is required in moderation, stagnation of water should not be allowed. It is recommended to mulch decorative apple trees. For this, peat, sawdust, bark of coniferous trees, walnut shells are suitable.

If you don't want to include the apples of ornamental trees in your diet, you can get rid of parasites during flowering and fruiting. But it is still not advised to produce this if children may be present on the territory, who often pay attention to beautiful small fruits.

The harvest also serves as food for birds, which will not be delighted with chemicals. This means that to avoid chemical poisoning, it is necessary to apply them before the start of the growing process.

Ornamental apple trees are most often attacked by scab, powdery mildew, bacteria that cause illness or burns. If a site with a burn is found, the apple tree must be removed from the site, because this tree is a breeding ground for harmful microorganisms.

Ornamental apple trees can be propagated using seeds. They are planted immediately after being removed at the beginning of the fall season, or after hardening for forty-five to sixty days at the end of the fall season.

Exceptionally rare varieties and types of apple trees with enhanced properties, which are not transmitted by planting, are bred only by grafting.

Cutting is not the most effective, but permissible way. In a larger number of fruiting trees, the probability does not reach more than five to fifteen percent, even when treated with growth stimulants.

There are a very large number of varieties of ornamental apple trees. Let's consider the most popular ones 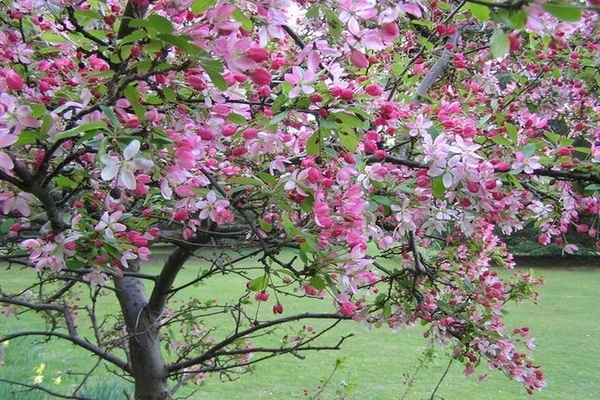 Photo of a variety of decorative apple "Malus Floribunda"

A beautiful fruiting tree from Japan. Translated from Japanese into Russian, the name of the apple tree means "vigorously flowering tree." Ideal for small suburban areas, as it grows up to four meters.

Often found as a bush with branched branches. There are also specimens with spines and foliage of a dark greenish color, the shape resembles a hen's egg, about four to eight centimeters long.

Inflorescences are rather large, reddish in groups. After opening, they become soft pinkish, about two and a half to three centimeters wide. In groups of four to seven on purple stalks, open in May.

The apples are in the shape of a ball, small, about one to two centimeters wide, red and yellow at the same time. They ripen in September. It is considered the most decorative fruit-bearing tree.

A perfectly white fruit-bearing tree is the Malus Pallasiana apple or Siberian. The apple tree grows up to three to five meters, it is found in the form of shrubs with a round crown. The foliage has a shape similar to a hen's egg, two and a half to eight centimeters long.

Inflorescences are snow-white on elongated pedicels, two to three and a half centimeters wide, four to eight in groups in the form of umbrellas. They open at the end of the spring season. Apples have the shape of a ball, yellowish with a reddish tint, up to one centimeter wide. They ripen at the beginning of the autumn season. Mongolia, Eastern Siberia, China, the North and Far East are considered to be the native lands.

The leaves are shaped like a hen's egg, usually with three lobes, five to eight centimeters long, dark greenish. In the autumn season they are orangeish and yellowish.

Inflorescences are snow-white, on bald pedicels, five to six per inflorescence, open at the end of the spring season.

The apples are almost perfectly round, about one centimeter wide, dark reddish in color with a bloom of wax. They ripen at the beginning of the autumn season. 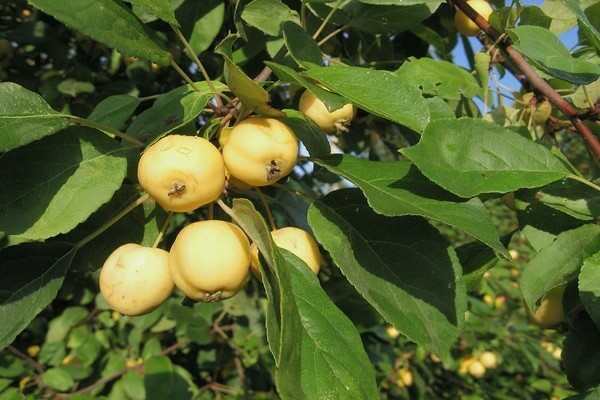 Photo of a variety of decorative apple "Malus prunifolia"

This fruiting tree or shrub grows up to ten meters with young branches with fluff. The leaves have a shape similar to a hen's egg, five to ten centimeters long, dark green in color, slightly glossy. In the autumn season, yellowish or brownish.

The inflorescences are large, three centimeters wide, snow-white, five to ten in groups in the form of umbrellas. Opens at the end of the spring season.

Apples have the shape of a ball, up to two to three centimeters wide on elongated stalks, yellowish or reddish, with sourness. Eaten fruits ripen at the beginning of the autumn season and do not deteriorate for a long time.

Ornamental in flowering and fruiting processes. Has a high level of resistance to fungal diseases. The native lands are the territories of Northeast China.

The fruiting Zumi tree may be a selection from the Manchu variety and the Siebolda. A small tree with a profusely growing crown in the form of a ball, grows from six to twelve meters.

The foliage is elongated, the shape resembles a hen's egg, located on elongated branches. Blades are pronounced, four to nine centimeters long. There are a large number of inflorescences, two and a half to three centimeters wide. In groups they are pinkish, opening into snow-white at the end of the spring season - at the beginning of the summer.

The apples are ball-shaped, reddish, about one centimeter wide. They ripen at the beginning of the autumn season. Decorative in the process of flowering and harvesting. 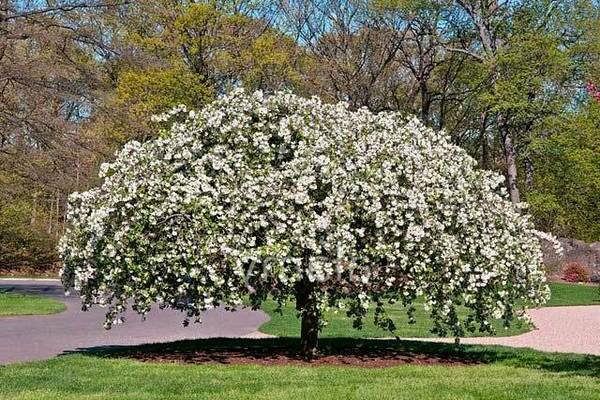 Photo of the variety of decorative apple "Malus shadekeri"

The fruiting tree grows to about three and a half meters. It has a dark brownish trunk and cracked bark.

Shoots are light brownish with orange color and faded lenticels. Foliage in the form of an oval, with sharp teeth, dark green color.

Inflorescences are pale pinkish, half terry, up to three and a half centimeters wide, dark pink in groups. The apples are round or in the shape of an elongated chicken egg, rich yellow.

Obtained in breeding in an almost unchanged, uncultivated form. In natural conditions, it can be found almost everywhere, especially in America. It grows with correct agricultural technology up to one hundred and twenty centimeters up and has elongated flexible shoots, which, as a result of foliage growth and crop maturation, sink to the soil.

Exclusively because of this, the ornamental apple tree has the name "weeping". It grows well throughout Russia, as it is frost-resistant. 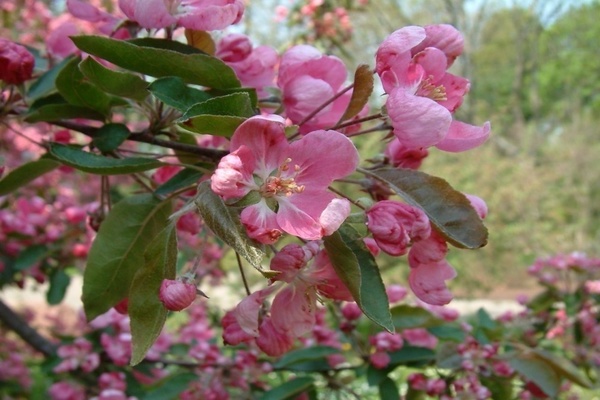 Photo of the variety of decorative apple "Ola malus hybrid"

A small ornamental tree of this variety was obtained in Poland. Prefers moist and moderately moist lands. Blooms strongly in areas with sufficient sunlight, but reacts normally to partial shade.

Due to the fact that the tree does not grow above five hundred centimeters, it is used for decorative landscaping of cities. The beautiful, neat crown of the tree in the spring season is covered with pinkish inflorescences, a wonderful smell emanates from them. 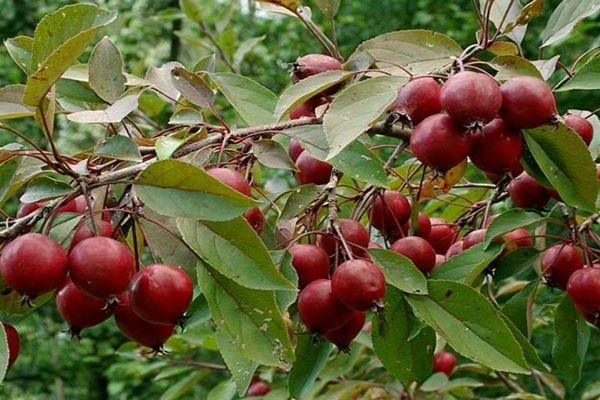 Photo of the variety of decorative apple "Raika Makovetskiy"

A fruiting tree or shrub with a uniform ball-shaped crown grows up to two meters wide. With reddish shoots. The foliage is reddish when opened, with time it becomes dark green with a reddish tint.

The flowering process takes place in the middle of the summer season and is characterized by large red inflorescences.

Apples of bright reddish color, suitable for human consumption. He is a lover of light. Prefers moist and fertile lands. Has a high level of resistance to disease and cold.

Hosta: important rules for growing and caring for a plant

How to propagate chokeberry. Methods and Recommendations

Persimmon: how to properly grow from a stone at home?