Yellow leaves of a pumpkin: reasons and what to do?
2 199

Yellow leaves of a pumpkin: reasons and what to do?

Very often, gardeners grow a vegetable such as a pumpkin on their plot. It has a long growing season, which can be up to 150 days. For the formation and ripening of fruits, a large amount of nutrients are needed, which must be contained in the soil. Therefore, this vegetable needs to be fertilized regularly. There are many reasons why pumpkin has yellow leaves, one of them is the lack of useful elements. As well as yellowing of leaves, various diseases and pests, unfavorable weather conditions, improper planting and many others can affect.

Yellow leaves of a pumpkin: reasons 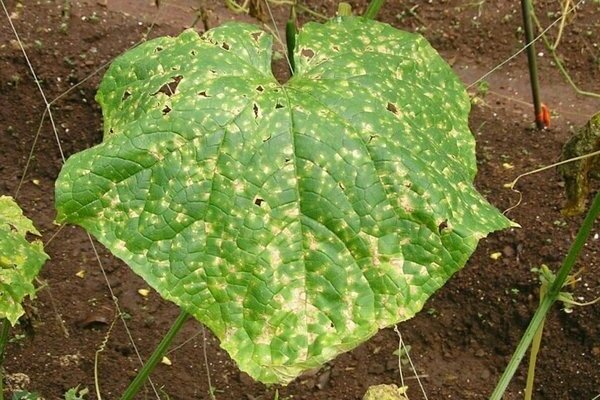 Most pumpkins are grown either from seeds or seedlings - this depends on the weather conditions in your region. In the northern regions, the pumpkin is planted only in seedlings, in the southern regions they use both seeds, which are sown in the ground, and seedlings. With improper planting, and not observing the conditions of pre-sowing preparation, yellow leaves of the pumpkin may appear. Dealing with this problem is not difficult. You just need to find out the cause in time and take measures to eliminate it.

Pumpkin seedlings often turn yellow from lack of light. For normal development, pumpkin seedlings need at least 10 hours of daylight hours. If natural light is not enough, then fluorescent lamps are placed over the seedlings to increase the length of the day.

Very often, fluctuations in temperature are the cause of yellow foliage in pumpkins. For example, a sharp drop in temperature in the daytime to 10 degrees, a long daytime drought, which is replaced by a cold snap at night, or night frosts, which led to the freezing of a vegetable, after which its leaves and whips that were on the ground turned yellow.

Of course, we cannot influence temperature changes in any way, but we can help the plant adapt to them. 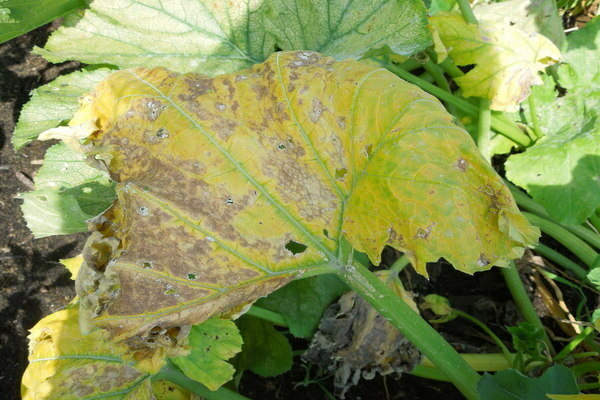 One of the main causes of yellow leaves is a lack of nutrients. For good growth and development, pumpkin needs nutrient-rich soil. It is from the soil that this vegetable receives most of its nutrients.

Pumpkin in the process of growing constantly needs additional feeding. And in order for it not to fade, so that the leaves do not turn yellow, and the vegetable itself feels great, you need to fertilize according to the following schedule:

The first time feeding with organic fertilizers is carried out when the first 5-6 true leaves appear.

The second time feeding is carried out before flowering. Mainly fed with organic matter and mineral fertilizers containing potassium.

Further, throughout the entire growth of the pumpkin, it needs to be fed 2-3 more times, with fertilizers containing such elements as potassium, calcium, phosphorus.

The feeding schedule described above must be carried out without fail. If the soil in your area is poor, contains few nutrients, then the amount of dressing should be increased.

It is possible to fertilize plants both by the root and to carry out foliar dressing, the only thing you can spray the plants is only before flowering, after, this type of dressing must be completely excluded. 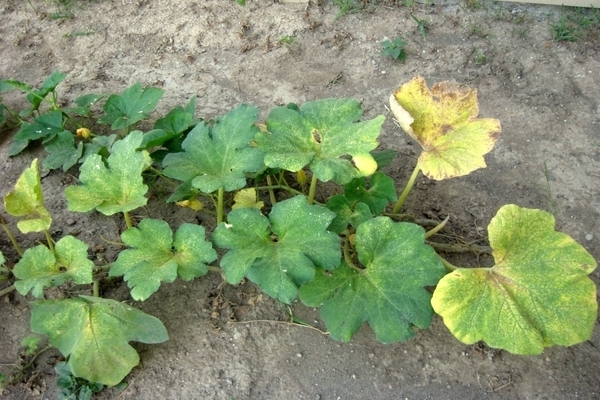 Pumpkin is a vegetable that is resistant to many diseases, but despite this, it can become infected from soil or other plants. It is difficult to treat.

Diseases that can cause yellowing of foliage are mainly fungal in nature.Infection occurs in the soil, and first of all, the roots suffer, and then the aboveground part. The disease progresses rapidly throughout the plant. The source of infection is sometimes very difficult to find.

Powdery mildew. A very serious illness. It will cut a wide variety of plants. A gray-white bloom appears on the leaves, outwardly similar to flour. After a while, the bloom becomes brown, and the whole plant turns yellow. The scourge wither and dry up, the fruit does not form. The plant's immunity is greatly reduced. It is not able to fight, so it can become infected with other diseases we see or it can be attacked by insect pests.

White rot. At the beginning of the disease, the edges of the leaf begin to acquire a yellow tint. Then, after a while, the leaves are covered with a white bloom, which becomes slimy. The process of leaf decay begins, which gradually spreads to the entire plant.

Viral leaf mosaic. With this disease, the leaves turn yellow, become covered with yellow mosaic spots, curl and dry out. The fruits are deformed and also become stained. The plants themselves grow very slowly, as they are unable to assimilate nutrients from the soil and additional feeding does not improve the situation. This disease mainly affects young pumpkin bushes.

Root rot. As a result of this disease, the roots of the plant rot. At the same time, the aboveground part does not receive additional nutrients necessary for normal development and begins to turn yellow. Yellowing begins with the lower leaves, then the whip and gradually the whole plant becomes yellow. 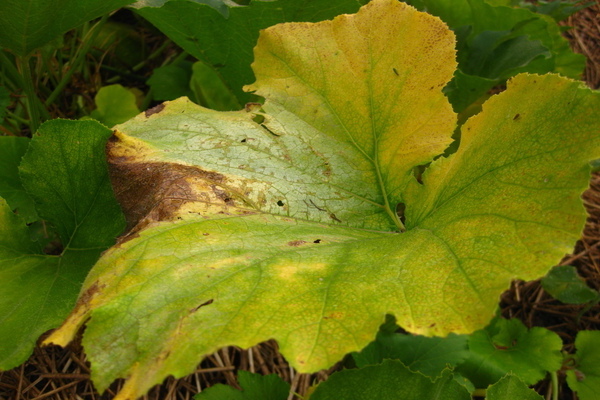 1. Violations of agricultural technology, namely the irrigation regime. Too wet soil leads to root rot, especially if watered with cold water. A long drought also has a negative impact.

It is better to water the soil infrequently, but abundantly, so that the water passes into the lower layers of the soil.

2. Violations of crop rotation. If you plant a pumpkin in the same area all the time, then this leads to depletion of the soil and the accumulation of fungi and pests in it. It is necessary to transplant the vegetable to a new location every three years.

3. Not timely weeding and loosening of the site. All this leads to the rapid spread of the fungus in all plants. 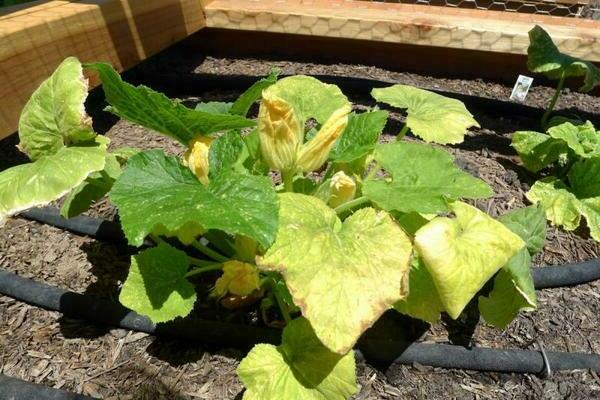 Insect pests are another cause of yellow leaves. The most common pests of pumpkin are:

1. Melon aphid. It multiplies rapidly. This insect is found on all organs of the plant, but most of all they can be found on the back of the leaf. It feeds on aphids on the cell sap of the plant, as a result of which the leaves turn yellow, gradually weaken and fall off. It is difficult to destroy completely, since after the treatments, adult plants die, but the larvae remain.

2. Spider mite. This pest braids leaves and stems with its web. It also feeds on plant sap. Gradually, the leaves turn yellow and wither. After a while, they dry up and fall off.

On fruits, the negative influence of this insect is lost in the cracking of the peel.

3. Slugs. These pests can be easily detected, but it is difficult to cope with the harm caused by them. They eat leaves, stems, fruits of plants, as a result of which leaves, whips and stems turn yellow and wither.

Ways to deal with yellowing of pumpkin leaves 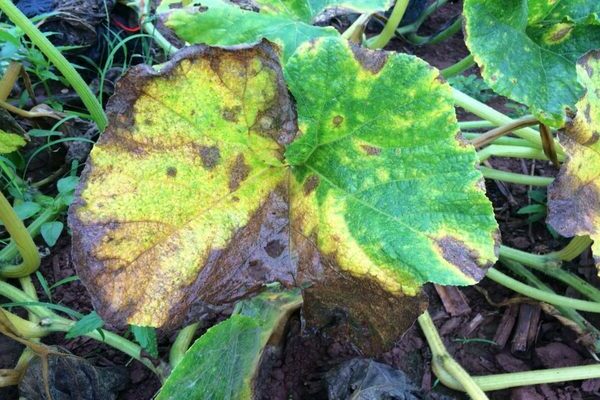 When the temperature fluctuates.

To protect the pumpkin from the cold, you can use a covering material that is sold in stores in a large assortment (agrofibre, spunbond). When covering the pumpkin at night, do not forget to ventilate it during the day to avoid condensation formation, as well as rotting roots.

In sunny and hot weather, the plants need to be shaded to avoid burns on the leaves. As a result of a burn, the entire leaf turns yellow, not just the edges. Also, you do not need to water the plants during the day. Since water droplets in the sun act like small magnifiers, burning the leaves. If the weather is very hot, then you can reduce the temperature around the plant using drip irrigation.

Lack of food is easy to make up. If all the plants have turned yellow, then nitrogen must be added. It will quickly build up the green aboveground portion. If the soil where this vegetable is grown is very poor, then it must be fertilized with organic substances. They gradually decompose will raise its fertility. During fruiting, fertilizers containing potassium and phosphorus, such as potassium chloride and superphosphate, must be applied to avoid yellowing.

For the treatment of various fungal diseases, various agricultural techniques are used, the agent is treated with special means.

In case of bacteriosis, all infected parts must be removed and burned. Treat the plants with a 1% solution of Bordeaux liquid. As a preventive measure for the disease, observe the basic rules of crop rotation.

Measures to combat white rot include the timely removal of weeds, treating the plant with a solution of copper sulfate, sprinkling the soil around with wood ash or chalk.

If the plant is affected by root rot, then the topsoil must be replaced. Treat the aboveground part of the plant with ash, and the root collar with 1% Furdanozol solution.

Controlling powdery mildew is difficult, but possible. As a preventive measure, mullein solution can be added to the hole during planting. For the treatment of the disease, it can be treated with a solution of colloidal sulfur or with Topaz.

To avoid the appearance of a viral leaf mosaic on the pumpkin, you need to disinfect the soil and seeds before planting. And when a disease appears, spray the pumpkin with any fungicide.

In order to protect plants from any disease, preventive measures must be taken before sowing. Namely, the seeds are disinfected with a solution of potassium permanganate, hydrogen peroxide. They are also hardened and tested for germination by dropping it into a glass of water.

The soil is also disinfected. When planting, observe the crop rotation. That is, this vegetable has not been planted in the same place for more than three years in a row. They also plant pumpkin where tomatoes, eggplants or carrots used to grow.

Carrying out preventive measures is considered to be the best protection of a plant from insect pests.

As a prophylaxis, you can use planting plants that emit phytoncides that repel insects. For example, marigolds, calendula, celandine, etc. They protect pumpkin well from aphids, spider mites.

If insects do appear, then the plants are treated with insecticides. Pumpkins are sprayed with these preparations several times, until the pest disappears completely.

To combat slugs, adults are harvested by hand, as there is no way to get rid of them. The plants themselves are sprayed with a tobacco solution so that the slugs do not come back. For which leaves are taken, poured with water and infused for several hours. You can also use a solution of laundry soap for processing. To do this, it is finely chopped, dissolved in water and sprayed.

Also, as a preventive measure, sawdust can be scattered around the plants, slugs do not like to crawl over them.

As you can see, there are many reasons for the yellowing of the leaves of the pumpkin. But if you take preventive measures, deal with diseases and pests in time, follow the basic rules of agricultural technology and crop rotation, then the loss of yield can be avoided.

Rose Avalange: description of the variety and its types, pros and cons

Ants: how to get rid of them in the garden