Among the large number of varieties, pay attention in appearance to not very decorative, but in its characteristics a very attractive variety - Otradnenskaya Pear. From this material you will learn about the characteristics, proper cultivation and proper care of this variety. 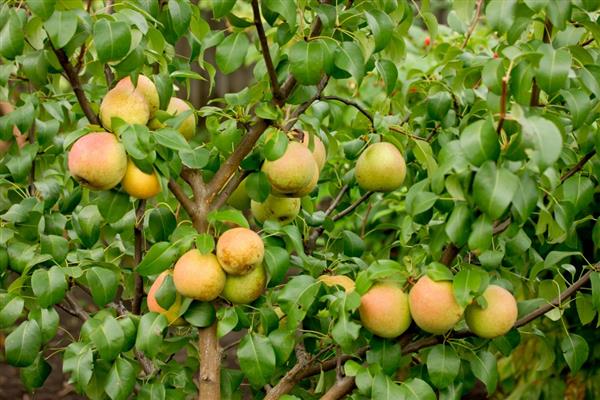 The ripening of the fruits of the Otradnenskaya pear variety occurs on September days, this variety is autumn, the fruits are stored for up to four months. When fruits are stored, color and sugar content are added, if at the time of harvest they were greenish-yellow in color, then they begin to gradually turn yellow, and a blurry speck of red color acquires a strong saturation.

The disadvantage of the Otradnenskaya pear variety is that there is no characteristic pear smell and juiciness of taste, but no one thought that not everyone loves the pear aroma.

And the plump, sweet inner content of the fruit has as many fans as the loose, juicy structure.

To each his own, as they say, there is no need to outline anything with the words "technical grade", this pear variety is a pear of great opportunities!

Pear Otradnenskaya: characteristic of the variety

Otradnenskaya pear of medium height, the trunk and skeletal branches are painted in gray, the shoots are thin, brown in color, the leaves are dark green, small, the crown is very leafy.

White buds, flowers are also white, are collected in inflorescences of five to seven pieces. Decorative fruits, weighing from one hundred thirty to one hundred and fifty grams, are presented in the form of an oval or two cones, they do not fall off, the yield indicator is regular and high.

Pear Otradnenskaya: features of the variety 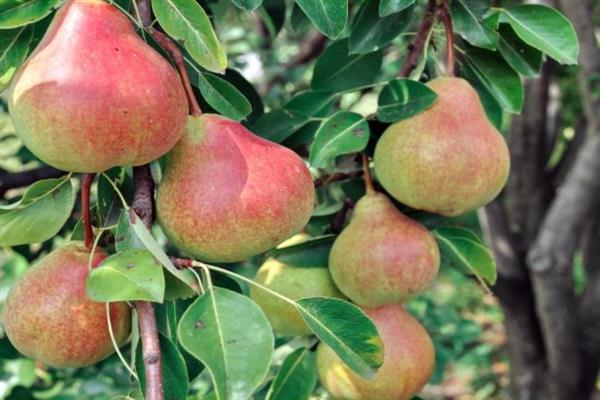 The pear of Otradnenskaya is self-fertile, but if there are helpers for pollination, then the yield rate increases.

The best varieties for pollination of pears Otradnenskaya: "Moskvichka", "Marble", "Elegant Efimova". However, if you cannot plant them, then neighboring pear trees or those growing wild behind the fence will come to the rescue.

The pear of Otradnenskaya is undemanding, it has good tolerance to negative climatic conditions, and is immune to scab.

A brief excursion into history

The pear variety Otradnenskaya was obtained by the scientists-breeders of the Moscow Agricultural Academy named after K. A. Timiryazev S. T. Chizhov and S. P. Potapov, they crossed the variety “Topic"With" Forest Beauty ".

The late autumn pear variety "Otradnenskaya" is included in the state register, the patent states that it is recommended for cultivation in the Central Black Earth Region. 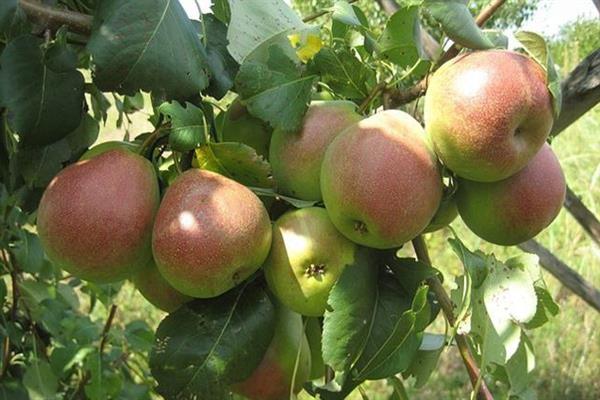 The health of the pear, the yield indicator, the qualitative composition of the fruit, and the lifespan depend on the correct choice of the site for planting.

Pear Otradnenskaya is medium-sized, but still she should pick up a free area that will be well illuminated by the sun and ventilated.

You cannot plant pear trees near the walls, fences, between buildings, since young trees will begin to stretch, the crown will not be fully formed, therefore, there will be no generous and high-quality harvest.

With the ground, everything is simple. If it is not very nutritious, then fertilization can be applied and improved when planting plants.

It is possible to plant a pear of the Otradnenskaya variety both in the spring and in the autumn season, but when planting in the fall, it is impossible to guarantee one hundred percent that the seedlings will root well, therefore it is advisable to postpone the planting time to the spring, and the planting material for wintering to dig in, the root system is placed in a shallow groove, barrel and crown are above the ground at an angle of forty-five degrees.

The root system is buried in and covered with any material, in the spring season they are thoroughly examined, all damaged parts are removed, the plant is transplanted to a permanent site.

Transplanting the pear does not tolerate well, the seedlings of one or two years old adapt better, the older the plant, the more likely it will die.

Seedlings grown in a container can be planted in a permanent area throughout the growing season. In the selected area, they dig the required number of holes for planting, one meter deep, eighty cm wide and eighty cm long, the interval between the holes is at least three meters. Despite the fact that the variety is not vigorous, it will not tolerate great density.

The surface soil nutrient layer must be set aside separately from another, less nutritious, layer dug from the bottom, humus (bucket), superphosphate (glass), potassium salts (0.5 cups), wood ash (scoop) must be added to the nutrient layer from the hole, everything is good mix.

In the middle of the pit for planting, a hill is made, the earth is slightly compacted, the roots are equally distributed over the hill and gradually, also equally, they are covered with earth, constantly compacting it.

If air voids remain, then because of this, the root system can rot, and the tree in the future may even die.

The root collar should be located 5 cm higher above the surface soil layer, when watering the plant, the soil will settle, and the root collar will take the necessary position by itself.

Water spreading during watering will not occur if boards are made from the less nutritious soil that you set aside when you dug the hole. Water it abundantly.

It is required to finish planting as follows: drive a peg next to the plant, but in such a way that the stake does not interfere with the plant, then a tree is tied to the peg with the help of a twine so that it allows the future pear to grow and develop well. 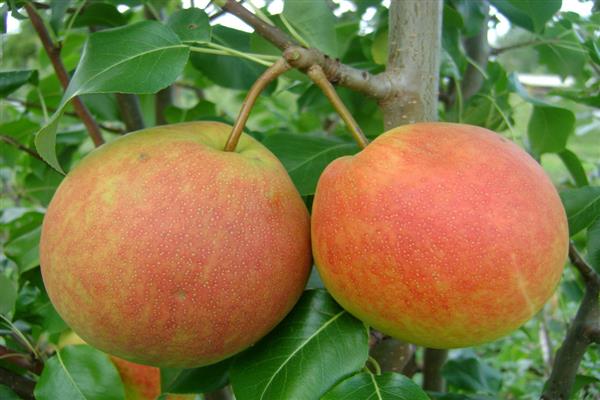 In the first year after planting, the bush must be constantly monitored, watering is done when needed, the soil is also loosened, thanks to which the water will not evaporate.

Before the tree begins to bear fruit, the near-trunk circle is dug without damaging the root system, thanks to this it will be possible to weed, loosen, water the soil when necessary.

The pear tree Otradnenskaya reacts negatively to excess moisture, an adult tree is watered 1 time / thirty days, if there is no rain.

If a 1 year old seedling is planted, then it is shortened to 1 m, the buds that are located below fifty cm are removed.

A seedling two years after planting is cut to 1/3 of the length of the branches, thanks to this, the root system of a young pear will be actively developed.

The annual plant is pruned the next year in the same way. The crown of a pear is formed on its own, so there is no need to interfere with it.

This variety is resistant to frost, however, if the branches are frozen, then the replacement shoots are fixed with pegs and twine in the horizontal plane, otherwise, they will not bear fruit.

When the tree begins to bear fruit, digging up the near-trunk circle is replaced by tinning, and weeding is replaced by mowing of grassy vegetation. The trunks and skeletal branches of a young pear do not need to be cleaned, but over the years, dead bark appears, it is removed with a scraper, the wounds are treated with a 3% solution of ferrous sulfate.

Garbage cleanings are burned, as harmful insects, fungal spores, mosses and lichens live in the crevices and cracks of dead bark residues.

The composition of the components for whitewashing: lime, clay in equal quantities, iron vitriol (one hundred grams). Dissolve this in a bucket of water, mix, the whitewash should resemble liquid sour cream in structure.

They clean the trunks and bleach them early in the spring.

In the autumn season, fruit-mummies are removed from pears, fallen leaves are collected and burned, since harmful insects and spores of various ailments spend their winter in the fallen leaves and pears affected by the disease.

In warm weather, in spring, not only vegetation wakes up, but also a large number of its enemies, in this regard, still bare branches are sprayed with an ammonia solution (ten percent), this prevention is directed against all types of diseases caused by fungi and bacteria, as well as against harmful insects.

So that moths, flower beetles, ticks do not attack the pears of the Otradnenskaya variety, trees are treated for prophylaxis before they bloom and after the flowering period with any insecticidal preparation. It is worth noting that this variety is distinguished by good immunity to diseases, it was not affected by scab.

An important and most important aspect of preventive measures against diseases is competent care, if the trees are properly looked after, they will not be affected by diseases, and pests will not damage them on a huge scale, if you constantly monitor the state of pears, then ailments and enemies will not harm the plants, as well as all these comrades are easily discovered and you can just as easily get rid of them.

Pear Otradnenskaya seems to have been specially bred for zealous gardeners - the fruits are sweet, with dense inner contents, it is wonderful to cook dried fruits from them, and the jam turns out to be amazing, and they will survive until the New Year, the fruits will become a table decoration for the holiday.

How to store carrots: 8+ effective ways 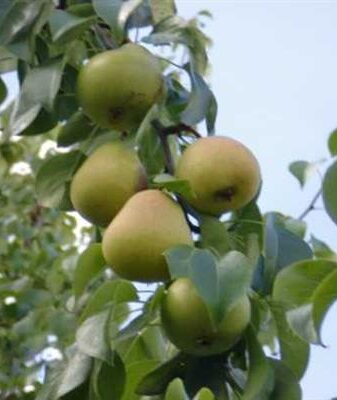 Pear Moscow
The types of plants that bear fruit and that grow in our garden plots surprise with their ... 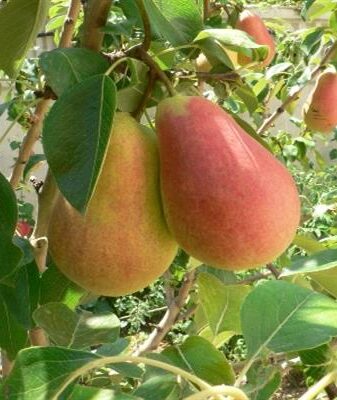 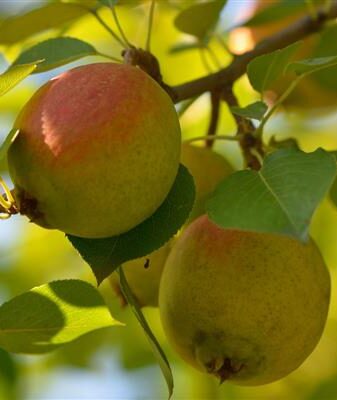 Pear Larinskaya
Pear Larinskaya, even though it is not stored until the March days, but there are many other varieties of the winter period ...
×